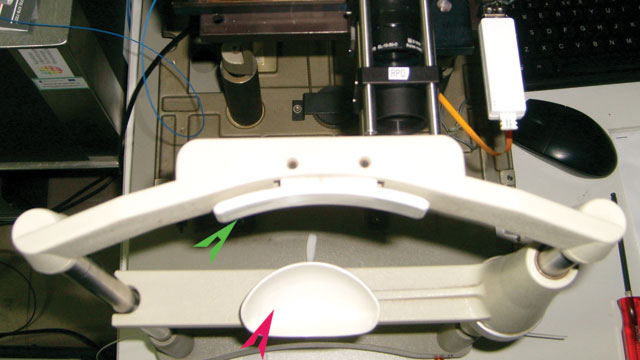 Last year, Jeffrey Tibbetts looked up at the moon and saw something he had never seen before: despite its being a crescent moon, most of it covered in the Earth’s shadow, the entire circumference was visible to him. “Oh god, it was really cool,” recalls Tibbetts, who cofounded the independent research organization Science for the Masses. Night after night, he could see all of the moon, regardless of what phase it was in. His daytime vision had also changed: sunrises were especially spectacular, almost neon in their brilliance. He attributes these new qualities to a crowdfunded research project he was leading (and participating in) to expand humans’ visual range into the infrared.

For three months, Tibbetts and the other participants had gone on a diet deficient in vitamin A1, or retinol, which...

Tibbets and his collaborators recorded retinal activity in response to various wavelengths of light and found that after taking the dehydroretinol for a few days (and forcing the body to use it as a substitute for retinal), people’s eyes started to react to wavelengths of light longer than 850 nm (the typical limit of the visual spectrum is 720 nm). Tibbetts says his overall night vision got better, and he could see through the one-way privacy glass on storefronts. Although sensorially delightful, the experience came at a cost; participants lost their appetites, and Tibbetts says he developed an impairment in discriminating between blues and greens.

From an organic chemistry point of view, this event should not happen. This is nonlinear physics.—Krzysztof Palczewski,
Case Western Reserve University

Though Tibbetts’s experience is certainly unique, the ability to detect infrared light among humans is not. Sporadically in the 20th century, scientists had reported that humans could detect light in the near infrared, hundreds of nanometers beyond the accepted limits of our visual abilities.

The US military even looked into the phenomenon at one point. In the 1970s, David Sliney worked for what was then called the US Army Environmental Hygiene Agency, located at Aberdeen Proving Ground in Maryland. “At the time there was some interest in how easy it was for individuals to see infrared searchlights,” Sliney recalls. He and his colleagues gathered up a bevy of lasers to see if they “could extend the lambda curve”—in other words, expand the visual spectrum.

It was a difficult set of experiments, particularly in trying to isolate specific wavelengths of laser light. But Sliney and his colleagues succeeded in showing that human participants (and they themselves) could detect near-infrared light—which extends from about 700–2,500 nm—as far out as 1,064 nm. At this wavelength, the light appeared green from a 20-nanosecond pulsed laser.

“I was rather convinced it was frequency doubling” that allowed for the detection of such long wavelengths, Sliney says. In frequency doubling, also called second harmonic generation, two photons unite in a crystalline material or in some part of the eye (perhaps the cornea), to produce a light of double the energy and half the wavelength. If this happens with, say, a laser of 1,064 nm, the resulting stimulus to hit the photoreceptors would be a light of 532 nm, which would appear green.

But the exact mechanism of humans’ ability to see in the deep red was never nailed down. Recently, Krzysztof Palczewski of Case Western Reserve University was given a serendipitous opportunity to pick up the thread. He was in Poland in 2012 accepting an award for scientific achievement when he struck up a conversation with another award recipient, Maciej Wojtkowski, an engineer at Nicolaus Copernicus University in Torun. Palczewski ended up visiting Wojtkowski’s lab to use his lasers for retinal imaging studies. While working with the lasers, Palczewski noticed that he could see the light, despite the long wavelengths. “We were intrigued,” Palczewski says. He asked others in the lab to go into the dark room, and each of them came back reporting a yellowish or greenish light from the laser.

“From an organic chemistry point of view, this event should not happen. This is nonlinear physics,” Palczewski adds. As wavelengths get longer, the energy of the light gets weaker, and in the infrared it should be too weak to excite the chromophores in our photoreceptors. Still, their observations were undeniable. “That was really very exciting. We started planning a whole project about how to get into this mechanism.”

To test whether second harmonic generation could be responsible for humans’ infrared vision, Palczewski’s team isolated mouse retinas away from the cornea, lens, or other material that could produce the effect and recorded their responses to infrared light. Visual pigments were still able to respond to infrared light, suggesting that another process was taking place: two-photon isomerization (PNAS, doi:10.1073/pnas.1410162111, 2014). In this situation, the photopigments themselves absorb two photons at once. Additional experiments and modeling backed up the researchers’ hypothesis. “What we have found is, everything fits this two-photon isomerization [model] rather than second harmonic generation,” says Palczewski.

“They certainly have very strong evidence that it happens in mice rods. They nailed that very nicely,” says Qasim Zaidi, a perceptual neuroscientist at the SUNY College of Optometry in New York City. “The question is: Is that the only thing happening in human vision?” Zaidi says repeating the experiments with human retinas could put the question to bed. (Sliney points out that Palczewski’s team didn’t use the same type of laser his group did to elicit second harmonic generation.)

As for Tibbetts’s enhancing his infrared vision, the experiment—which has not escaped criticism, and the results are yet to be peer reviewed—ended after a month, and the group is now writing up the results and moving on. Tibbetts and his colleague Gabriel Licina say it’s not worth the side effects to pursue any kind of long-term project on giving humans night vision using vitamin deficiency and supplementation. “We were hoping for a whole super vision thing,” says Licina, “but it’s too much of a pain in the ass.”