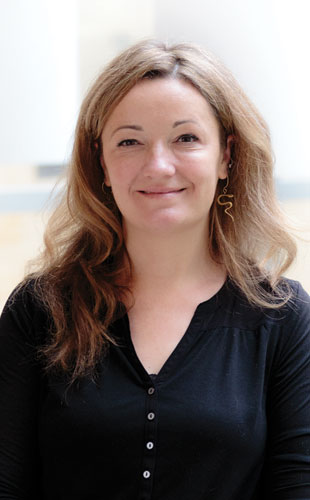 © PAUL SIMCOCKGrowing up on a farm in rural Austria, Doris Bachtrog was “always kind of the black sheep and the outlier in my family,” she recalls. “I cared about education; I was very curious.” She left home at age 13 to attend a boarding school that specialized in teaching chemical engineering.

Bachtrog earned an undergraduate degree in biology, and made use of her quantitative skill set to pursue a master’s thesis in population genetics. She wrote a computer program to identify microsatellites—variable DNA repeats used as genetic markers—in the Drosophila melanogaster genome. This first research experience left her “amazed that there was so much still unknown” about the natural world, Bachtrog says.

One area ripe for investigation with molecular tools was the evolution of sex chromosomes, and Drosophila miranda turned out to be a useful model system. Bachtrog and her PhD advisor, University of Edinburgh biologist Brian...

As a postdoctoral fellow in the lab of Andrew Clark at Cornell University, Bachtrog combed DNA sequence data to explore the divergence of two fruit fly species, D. santomea and D. yakuba, which live at different altitudes on the West African island of São Tomé, but sometimes interbreed. She and her colleagues observed differences in the species’ nuclear genes, but discovered surprising similarity in their mitochondrial DNA, highlighting unevenness in evolutionary dynamics across the genomes.2

Bachtrog had “a laser focus on the problems that she wanted to pursue,” recalls Clark, who says he felt more like her colleague than her mentor.

Bachtrog joined the faculty at the University of California, Berkeley, in 2008. Her colleague Michael Eisen soon convinced her to sequence the D. miranda genome. “I had no lab or anything,” she says. “Instead of looking for an apartment, I spent two weeks in the lab preparing a genomic library. . .that was my way of jumping into genomics.”

After obtaining the genome sequence, says Eisen, “she began to think about ways of studying sex chromosome evolution in a much more macroscopic way.” In 2013, Bachtrog and her postdoc Christopher Ellison used the genome sequences of D. miranda and related species to demonstrate that transposable elements called helitrons play an important role in the evolution of dosage compensation on the X chromosome.3

Bachtrog has also taken full advantage of next-generation sequencing to explore the origins and diversity of sex chromosomes in other species, including snakes and birds.

“She’s gone on to make quite a big splash in the field of evolutionary genomics,” says Charlesworth. “It’s been one of her characteristics that she’s not been afraid to get into things which are challenging.”

Bachtrog also brings a spirit of adventure to her Drosophila field-collecting trips—in the past year, she’s visited several nations in Southeast Asia, zipping through the countryside on a motorbike in pursuit of fruit flies.