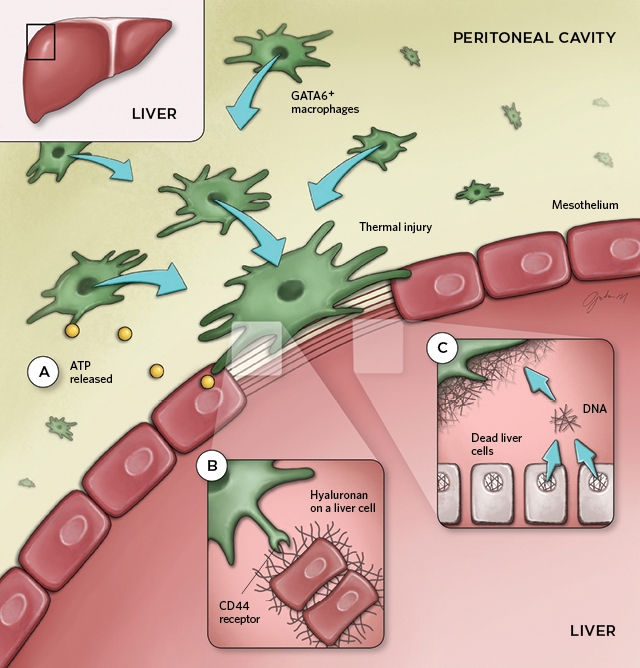 TO THE RESCUE: Upon liver injury, GATA6+ peritoneal macrophages sense ATP released from the wound and migrate toward it (A). At the injury site, macrophage-liver interaction is mediated by binding of macrophages’ CD44 to the carbohydrate hyaluronan exposed on the injured tissue (B). The macrophages degrade the nuclei of the dead hepatocytes and a layer of released DNA forms a cover across the wound (C). © JULIA MOORE/MOOREILLUSTRATIONS.COM

The immune system is best known for fighting infections and targeting anything it senses as foreign. But it also serves a less-appreciated, but crucial, duty: swooping in when the body’s own cells are injured or dying.

University of Calgary immunologist Paul Kubes has been working toward understanding this lesser-known role of immune...

The cells, which arrived within the hour, expressed general markers of macrophages, immune cells known for engulfing foreign cells and debris, but their source was unclear. They couldn’t be the liver’s resident macrophages, as those are stationary, and the injury had obliterated local cells. Nor could they be derived from macrophage precursors called monocytes, because that process of recruitment and differentiation takes days.

Rather, the cells expressed GATA6, a marker specific to large macrophages from the peritoneum, the body cavity that surrounds visceral organs such as the liver. The result revealed a job no one had known these cells were performing. “It shows that the peritoneal cavity . . . actually contains macrophages which themselves translocate into damaged tissues and therein actually help drive the repair process,” says Steve Jenkins, who studies the cells at the University of Edinburgh.

To better model human liver damage such as cirrhosis, the researchers treated the mice with the liver toxin carbon tetrachloride, which, unlike the thermal injuries, wreaked internal organ damage. They found that the peritoneal macrophages migrated across the mesothelium, the membrane separating the liver and other internal organs from the body cavity, and into the liver to a depth of several cell layers.

“One of the more important . . . areas this research would go in, then, is actually to find out what the role of peritoneal macrophages would be in chronic, repetitive liver damage,” such as that caused by alcohol abuse, says Jenkins, adding that repeated carbon tetrachloride administration in rodents could serve as a model for such hepatic harm.