After a 15-year marathon, researchers have created the first cell controlled by a synthetic genome, reported online today at Science. The advance, a landmark in synthetic biology, could someday be used to engineer microbes for environmental or medical applications. "This is a very impressive piece," said Jim Collins, a bioengineer at Boston University, who was not involved in the study. The research is a "methodological tour de force," said Collins.

Combining a series of techniques developed since 1995, J. Craig Venter and colleagues at the J. Craig Venter Institute in Rockville, Maryland began with a digitized genome sequence of Mycoplasma mycoides, a fast-growing bacterium with a 1-million-base genome. They ordered the pieces of that genome from a DNA sequence manufacturer, then used yeast to stitch the pieces together into a...

"They are living cells," Venter told The Scientist. "The only difference is they have no natural history. Their parents were the computer." The effort cost an estimated $40 million, with 20 people working for more than a decade, according to Science. "It was one hurdle after another," said Venter (who is a member of The Scientist's editorial board).

In 2007, when the team first tried to transplant a natural chromosome from one bacterial species to another, it didn't work. They soon realized the problem was methylation: The transplanted DNA didn't have the same methylation patterns as the excised DNA, so the recipient cell's restriction system chewed up the foreign DNA. "It took two years to solve that problem," said Venter.

Later, when the team had completed the synthetic genome of M. mycoides and tried to transplant it, again, nothing happened. Thanks to a novel de-bugging system they developed to test individual pieces of the synthetic DNA in a natural genome, the team found the problem -- a single base mistake. "We remade the [faulty] piece, reassembled the entire genome, then did the transplant," said Venter. A month ago at six in the morning, Venter received a text message from co-author Daniel Gibson. It had worked.

"This work represents an important piece of the puzzle," said Ron Weiss, a synthetic biologist at Princeton University, who also was not involved in the study. "These are certainly exciting times in synthetic biology right now."

Within the synthesized genome, Venter and colleagues left a watermark to clearly identify their work -- four added DNA sequences whose string of bases spell out messages. The first watermark includes a code with which to decipher the others, including the names of the contributing scientists, three famous quotes, and an email address. "If people can decipher the code, they can send an email to us," said Venter, challenging The Scientist readers to see how fast they can decrypt the message.

To scale up the process for other types of cells, researchers will have to solve two things in parallel, said Venter: designing and synthesizing the DNA of choice, and developing a system to boot up the genome. "Those two problems will have to be solved in parallel for every new species," he said. JCVI is currently working on two projects using the technology: Partnering with ExxonMobil to make synthetic algae to capture carbon dioxide and produce fuel, and a project with the National Institutes of Health and Novartis on vaccine production. "The first application the world may see could be as soon as next year," said Venter.

Yesterday (May 19), Venter was on Capital Hill briefing members of Congress about the advance.

Editor's note: Nature published a series of eight opinions on the article from synthetic biology experts. Click here to access their take on the findings. 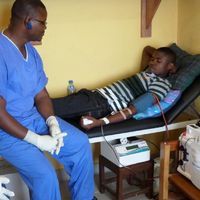