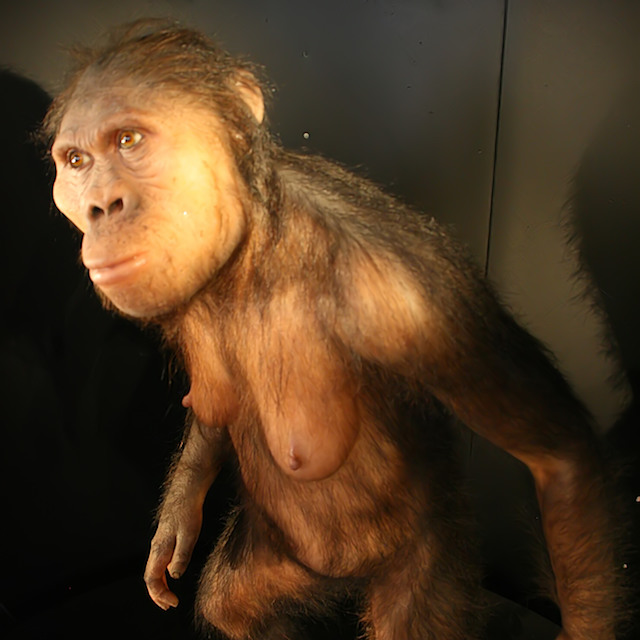 WIKIMEDIA, NACHOSANAround 3.18 million years ago, a young adult hominid died. But the cause of her death has remained a mystery. Now, an international team led by researchers at the University of Texas (UT) at Austin has proposed that this famous member of the bipedal Australopithecus afarensis—best known as “Lucy”—died of traumatic injuries after falling from a tree. The team published its hypothesis Monday (August 29) in Nature.

The team first scanned Lucy’s bones, which represent about 40 percent of her complete skeleton, using X-ray computed tomography. The technique allowed them to peer deep into the fossils, and trace the webs of fractures within.

A key piece of evidence to unravelling the mystery of Lucy’s death lay in a fracture between her shoulder and elbow—an unusual injury in fossils, but one seen after accidents in humans.

From this and other fractures across her body, the team surmised...

“When the extent of Lucy’s multiple injuries first came into focus, her image popped into my mind’s eye, and I felt a jump of empathy across time and space,” study coauthor John Kappelman, an anthropologist at UT Austin, said in a statement. “Lucy was no longer simply a box of bones but in death became a real individual: a small, broken body lying helpless at the bottom of a tree.”

Damage to Lucy’s bones almost certainly occurred both before and after her death. To distinguish injuries potentially sustained during Lucy’s life from those that could’ve happened hundreds upon thousands of years later, the researchers looked for hinge fractures, The Christian Science Monitor reported. Living bones tend to not break cleanly, leaving pieces tenuously attached. Because Lucy appeared to have these hinge fractures, which lacked signs of having had time to heal, the team concluded these were made just before her death.

Not all experts agree with the team’s interpretation. “There’s a myriad of explanations for bone breakage,” Arizona State University’s Donald Johanson, who with then-graduate student Tom Gray discovered Lucy in Ethiopia, told Scientific American. “Lucy [might] have been run over by a stampede of larger animals, elephants or large bovids or antelopes, prior to her being washed into a water environment where fossilization began.” He continued: “Such alternative explanations are not explored in the Nature article. In this regard the suggestion that she fell out of a tree is largely a ‘Just-So Story’ that is neither verifiable or falsifiable, and therefore unprovable.”

Kappelman told the Christian Science Monitor that his team considered several alternative causes for Lucy’s death—including a stampede, lightning, or flood. And still, he said, “it looks like the fall is the most likely scenario.”