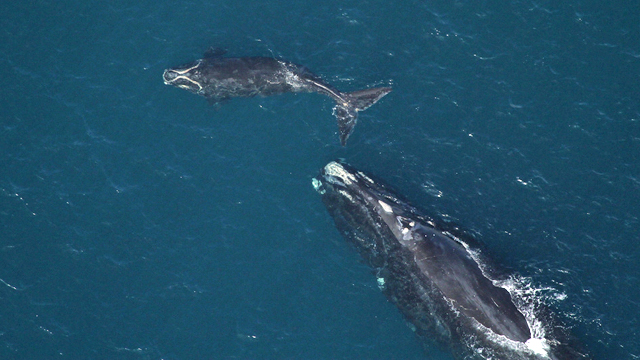 A right whale mother and calf photographed in 2012FLICKR, FWC FISH AND WILDLIFE RESEARCH INSTITUTEScientists tracking the endangered North Atlantic right whale have not spotted any newborns this year. Right whale mothers normally give birth and nurse off the US coast at this time, so no signs of new babies might signal dire consequence for the species.

“It’s a pivotal moment for right whales,” Barb Zoodsma of the National Marine Fisheries Service tells the Associated Press (AP). “If we don’t get serious and figure this out, it very well could be the beginning of the end.”

Trained spotters in airplanes have been searching coastal waters for mother-and-calf pairs since December. They will continue surveying the waters until Saturday (March 31), but so far have found nothing. It’s not likely there will be any last-minute newborn right whale sightings, says Zoodsma, who oversees the right whale recovery...

About 450 North Atlantic right whales are alive today, with only 94 being breeding females. In 2017, 17 dead whales washed ashore in the U.S. and Canada and only five were born. Charles “Stormy” Mayo, director of the Right Whale Ecology Program at the Center for Coastal Studies in Provincetown, Massachusetts, tells The New York Times that if no new right whales are born this season it would be “unprecedented.”

“I think we’re in a helluva pickle,” Mayo, whose team tracks right whales in Cape Cod Bay off the coast of Massachusetts, tells the Times. He notes, though, that the whales may have moved to other locations this season to give birth. “I will not be surprised, though I will be excited, if we see a calf or two in Cape Cod Bay,” he says.

One reason fewer whales may be born each breeding season is that the females can’t gain enough weight to become pregnant. That could be due to stress, especially from entanglement with fishing gear. “What we see a lot of in the body count [is] they will carry gear with them for weeks, months, or years,” Regina Asmutis-Silvia, the executive director for the Whale and Dolphin Conservation Society's North America office, tells National Geographic. “That [stress] factor lasts a long time. . . . There's also stress associated with ship noise and ocean noise.” Being hit by a ship can also deal a fatal blow to a right whale.

Mark Baumgartner, a marine ecologist at Woods Hole Oceanographic Institution in Massachusetts, tells National Geographic that one solution is to show the public what it’s like for whale to become tangled in fishing gear. “Entanglement injuries are gruesome,” he says. “They would never be tolerated in view of the public.”

“Right whales will be gone in 20 years if we do nothing,” he says.