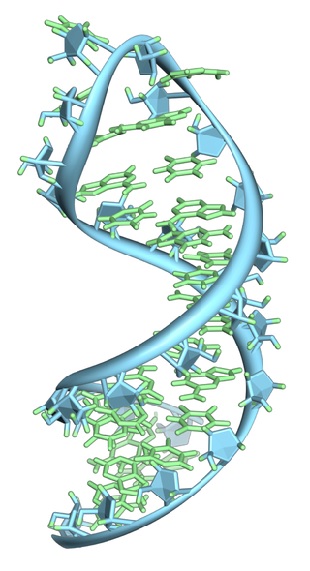 A single RNA strand folded on itself with nucleobases (green) and a ribose-phosphate backbone (blue)WIKIMEDIA, VOSSMANRNA consists of a phosphate backbone, sugar, and four bases (A, U, C, G), and has long seemed a promising candidate for early life’s precursor, because of its information-storing capacity and potential to act as a catalyst for certain chemical reactions. But it has been unclear how RNA’s two larger, purine bases (A and G) might have assembled in the conditions present on early Earth. Now, researchers in Germany provide the first demonstration of these bases’ formation from simple media. The team’s findings were published on Wednesday (May 12) in Science.

“We now have a pathway that would allow us to use simple molecules that were likely present on the early Earth,” study coauthor Thomas Carell of Ludwig-Maximilians-Universität München told New Scientist, adding that the next step will be to...

Researchers at the University of Manchester in the U.K. demonstrated in 2009 that RNA’s two smaller pyrimidine bases (C and U) could emerge from relatively simple chemicals. In the current study, the Munich-based team revealed a series of chemical reactions leading from similarly simple compounds that readily react in water, such as amines and acids, to large quantities of purine bases. “It’s like a domino cascade,” Carell told Science.

Origins-of-life researcher Gerald Joyce of the Scripps Research Institute in La Jolla, California, told Nature that the study was a “very nice piece of work,” adding that it is “certainly comparable in significance to the 2009 paper.”

And the hypothesis this study supports is part of just one theory for the origin of life; in an alternative view, where life arose in alkaline conditions around deep-sea vents, concentration gradients could have generated the chemical energy needed to create simple organic molecules—no spontaneous RNA self-assembly needed. In this case, microbiologist Bill Martin of Heinrich Heine University in Düsseldorf, Germany, told Nature, the results of the current study are less relevant to life’s beginning.

“It’s very fine chemistry,” Martin said of the study. “[But] I remain sceptical that it is reflecting any process that were involved in how we—our ancestors—arose.”