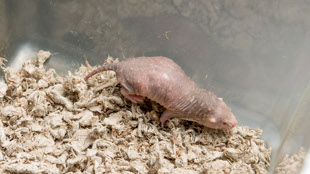 UNIVERSITY OF ROCHESTER, BRANDON VICKCancer often kills rodents, but naked mole-rats, which can live longer than 30 years, are not susceptible to the disease. A study published yesterday (June 19) in Nature suggests a mechanism for the phenomenon: a sugar in the spaces between naked mole-rat cells appears to lower the density of cell growth and prevent tumors from forming.

The protective substance, called hyaluronan (HA), is part of the extracellular matrix in many animals, but naked mole-rats produce large amounts of an HA variant that has a high molecular weight. Researchers discovered naked mole-rat HA’s unusual properties when they noticed that naked mole-rat cells in culture tended not to grow close together and were surrounded by a gooey substance that clogged the lab’s drains, Nature’s news site reported.

“Our lab technician was unhappy because she needed to disassemble the system and clean all this gooey stuff,”...

Seluanov and colleagues found that naked mole-rats had high HA levels because of production-boosting mutations to the enzyme that synthesizes HA and low activity of the enzyme that degrades the molecule. The researchers then grafted naked mole-rat cells that had been modified to express cancer-causing genes into mice. The cells that maintained HA at high levels did not form tumors in the mice, while the cells engineered to lack the protective HA molecule over-proliferated.

The researchers also showed that the HA was binding to the naked mole-rat cells and tapping into a pathway that leads to early contact inhibition, in which cells cease to divide when they reach a certain density—a phenomenon previously observed in naked mole-rats. A similar event inhibits cell growth at high density in other animals, but naked mole-rats arrest cell growth at especially low densities.

The researchers told Nature that their next step is to genetically engineer mice to produce HA like that of naked mole-rats, in an attempt to produce cancer-resistant mice.