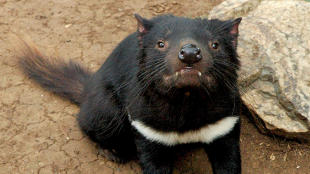 WIKIMEDIA, KERESHScientists working to slow the spread of a deadly facial cancer through populations of the Tasmania’s iconic marsupial Sarcophilus harrisii, or the Tasmanian devil, have announced progress by injecting live cancer cells into individuals with the disease. The study, which reports that some golf-ball-size tumors disappeared entirely after the injections, was published Thursday (March 9) in Scientific Reports.

“When we saw those tumors get smaller it was so exciting,” University of Tasmania immunologist Greg Woods told BBC News. “This is almost a eureka moment for us because it's the first time we can say for sure that it was the immunotherapy that was making the tumor shrink.”

The team of researchers, which included scientists from the United Kingdom and Denmark, administered devil facial tumor disease (DFTD) cells to six animals with the cancer. The cells,...

The findings may point the way toward a more effective vaccine that could protect remaining devil populations from DFTD. “The current immunization process uses dead (tumor) cells, whereas this one used live cells, so if we somehow get a combination of the two then we might have a better vaccine,” Woods said.

But protecting wild populations with vaccines is not so easy. “It's not feasible to track down and immunize every animal in the wild,” Bruce Lyons, a University of Tasmania researcher and coauthor told BBC News.