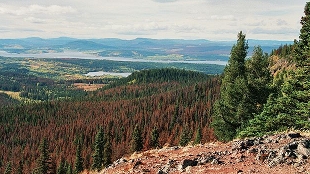 Mountain pine beetle damage near Mount Fraser, Canada.Wikipedia, Themightyquill.Pine beetle infestation increases the summertime temperatures of some Canadian forests by 1 degree Celsius—about the same impact as a forest fire—according to new findings published Sunday (November 25) in Nature Geoscience. The beetle populations, spurred into profusion by global warming, appear to be contributing to a temperature feedback loop, though it remains unclear how much the insects may affect weather patterns.

The results reinforce the conclusion that ecological disturbances like beetle infestations can have significant ecological impacts, said Allan Carroll, an insect ecologist at the University of British Columbia who did not participate in the research. ”We have until very recently considered biotic disturbances a bit player [in climate change],” noted Carroll, who collaborated on a recent study showing that pine beetle outbreaks transform forests from carbon sinks into large carbon emitters. The current study confirms...

“It’s an opportunity to see the effects of pine beetle infestation at larger scales,” said Edward Johnson, a biogeoscientist at the University of Calgary who was not involved in the study. Satellite imaging combined with climate models will allow researchers to get a better handle on how the enormous swaths of infested pine trees in North America’s boreal forests affect local weather, climate, and hydrology.

Pine beetles lay their eggs under pine tree bark, introducing a fungus that inhibits nutrient flow in the trees. Usually pine beetles are killed off by freezing winter temperatures, limiting their spread. But a recent spate of warm winters, combined with forests dominated by mature pine trees, enabled a beetle population boom in North America, including parts of Alberta, Wyoming, and Colorado.  About 170,000 square kilometers of British Columbia’s forest—almost 20 percent of the province’s area—have been affected by pine beetle infestations, costing thousands of timber industry jobs.

Many studies have focused on the role of global warming on pine beetle outbreaks, but fewer have looked at how the beetles themselves may be contributing to climate change. In order to examine the impact of beetle infestations, earth scientist Holly Maness and her colleagues at the University of California, Berkeley, used satellite data and climate models to determine how beetle infestations changed surface temperatures in the forests they infected.

“Trees ‘sweat’ to cool themselves,” explained Maness. The process of releasing water into the atmosphere is called evapotranspiration, and when trees die “this source of cooling is removed,” said Maness. “Solar energy once spent evaporating water goes into heating the surface instead, and this elevates the local surface temperatures.” A forest’s reflectivity, or albedo, also changes as trees die, altering how much energy is absorbed instead of reflected back into the atmosphere. In order to determine how mountain pine beetles affected forests, Maness and her collaborators used remote sensing data to measure surface temperature and gauge the amount of evapotranspiration occurring in damaged forests compared to what they’d expect to see in healthy forests during the summer.

They found that, on average, pine beetle infestation drops the amount of evaporation by almost 20 percent. Coupled with changes in how much heat the damaged forests absorb, Maness calculated that the pine beetle outbreaks increase the forest temperatures by about 1 degree Celsius.

Maness’s findings are in agreement with more direct measurements made at several local sites, said Dave Spittlehouse, a forest climatologist in British Columbia’s Ministry of Forests, Lands, and Natural Resource Operations, who did not participate in the research. As important as direct measurements can be, “It’s very useful to see how [these changes] add up over a whole area,” said Spittlehouse.

These changes in the water cycle—how much is transported back to the atmosphere versus reaching the soil—could have far-reaching effects on cloud formation and weather in the area, though it remains to be seen how extensive these effects may be, said Maness.

Higher temperatures could increase cloud formation as they push more air toward higher elevations—but this could be offset by the reduction in water evaporating from trees. More water, either as run-off or ground water, could increase flood risks, Maness speculated. Future studies are needed to get a better sense how much mountain pine beetles will affect local weather and hydrology.

“If water doesn’t go up through evaporation, it’s got to go down,” explained Spittlehouse. “This has the potential to increase the volume of peak flows [and increase flood risk]. There’s some concern about that,” Spittlehouse said, though he noted that most of the water in the area comes from snow melt—not at issue during the summer season of Maness’s study. The lack of transpiration may have more local effects, as certain areas no longer dry out in the summer, making recovery of wood difficult for loggers dealing with soggy terrain, Spittlehouse said.

It will be important for forestry managers in as yet unaffected areas to look closely at their forests, said Carroll. Pine beetles prefer mature trees, so forests with trees of varied ages—the kind encouraged by the natural wildfire process—can help prevent beetles from overrunning evergreen forests. Other bark beetles, like the spruce beetle, may be waiting in the wings for the right combination of conditions, so proactive forestry management will be important to prevent outbreaks on a similar scale, Carroll said.

It will be important to continue doing similar studies year-round, said Johnson, given the importance of winter temperatures to promoting pine beetle infestation.

“The current mountain pine beetle outbreaks are serving as an important parable in illustrating how the delicate balance of a stable climate can be easily disrupted by what seem like relatively modest changes,” said Maness. She hopes that her research can inform planning to counter future, as yet unforeseen, impacts of climate change. “No one predicted that there would be this army of rice grain-sized beetles that would destroy the BC forest industry and change regional climate in the process.”