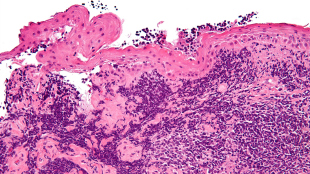 WIKIMEDIA, NEPHRONIn the march toward personalized medicine, genotyping cancers has become more and more complex. Panels that pick up variations in hundreds of potentially important genes can help physicians determine how a particular tumor operates and the best course of treatment. Whole-exome sequencing—the analysis of all the coding regions of the genome—has been somewhat of a pipe dream for clinical oncology, but a study published today (May 19) in Nature Medicine introduces a platform for analyzing the entire exome of cancer patients’ tumors.

“It’s fantastic,” said Sameek Roychowdhury, an oncology genomics researcher at Ohio State University who did not participate in the study. “It’s what everybody needs to see happening for this field.”

The new whole-exome platform extracts DNA from a preserved tumor sample, sequences all of the coding regions in the genome, and runs the data through an algorithm that can make sense of the variations uncovered...

Eliezer Van Allen, the lead author of the study and an instructor in medicine at Harvard Medical School and the Dana-Farber Cancer Institute, said that as more and more genetic information comes in, it makes sense to capture the whole exome, rather than redesign panels that target a limited number of genes. “It’s becoming more logical to say, ‘Let’s get all of the information up front and use what we can,’ especially as the amount of information begins to expand,” he told The Scientist.

The algorithm Van Allen and his colleagues designed, called precision heuristics for interpreting the alteration landscape (PHIAL), sorts the genetic variations in a patient’s tumor sequence based on what’s already known about the biological activity and clinical relevance of such alterations. For instance, in a sample of 511 patients, PHIAL picked out 1,842 alterations—out of 250,000 variants in total—for which there exist drugs that can act upon the genes possessing those alterations.

To demonstrate how PHIAL might be used in making clinical decisions, the research team selected one patient with metastatic lung cancer. “It turned out this patient had a very rare mutation in [the oncogene] KRAS, which we don’t normally test for” in the clinic, but that PHIAL had selected as being important to the tumor, Van Allen said. Fortuitously, there was a clinical trial ongoing for a cyclin-dependent kinase 4 (CDK4) inhibitor that is thought to stop the growth of lung cells expressing KRAS. The patient enrolled in the trial and responded to the treatment; it was the only therapy he’d had any success with. “It was a compelling instance of why we’d like to do this more broadly,” Van Allen said.

The team has made a database of clinically actionable genes (including 130 so far) available online, and Van Allen said his group intends to make the PHIAL program freely accessible as well. Roychowdhury said the platform is a good model for other groups to follow in expanding the utility of cancer genomics. “I think next step will be to establish that this is a clinical-grade assay,” he told The Scientist.

Schweiger agreed that the methodological and bioinformatics headway made in the study are “powerful” and could advance efforts toward personalized medicine. One way to improve upon the process, she noted, would be to automate the selection of a clinical trial or experimental therapy once PHIAL has chosen the alterations that might benefit from intervention. “They had to add a lot of manual work in there,” she told The Scientist. Schweiger said there are already databases in development that could complement whole-exome analyses.

Stacey Gabriel, the director of the Genomics Platform at the Broad Institute and one of the senior authors of the study, said her facility charges $2,500 for whole-exome sequencing, but doesn’t offer the clinical consultation. Roychowdhury estimated that the total cost could go up to $10,000, including the expertise required for making treatment decisions based on the results. “In the context of therapies we’re developing, which cost $8,000 to $30,000 a month, we need to have tools to make sure we use these therapies in the right way,” he said. “I think it’s worth it.”