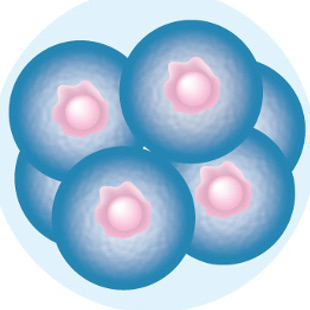 WIKIMEDIA, DATABASE CENTER FOR LIFE SCIENCES Most novel mutations in an individual are thought to originate in the germline. Other mutations, somatic mosaic mutations—which are only present in a subset of a person’s cells—can either be passed down from a parent or originate during early development. Such mosaic mutations were thought to be fairly rare, but according to a study published today (June 5) in The American Journal of Human Genetics, they may contribute to as much as 6.5 percent of an individual’s genomic variation. If confirmed, the results could affect how researchers estimate a person’s risk of passing disease-linked alleles on to their children.

The findings “highlight that mosaicism may be more common than we had appreciated so far,” geneticist Anne Goriely of the University of Oxford wrote in an e-mail to The Scientist. “The main value of the present study is an attempt to quantify...

Mosaicism can result when a de novo mutation arises after an embryo is formed. Using newer, more sensitive sequencing technologies, researchers have recently begun to identify mosaic mutations. For the present study, Alexander Hoischen of Radboud University Medical Center in Nijmegen, the Netherlands, and his colleagues used four different sequencing methods to estimate the frequency rate of this phenomenon in children.

Expanding on a previous sequencing effort to identify disease-causing de novo mutations in 50 children with intellectual disabilities by comparing their genomes to those of their two unaffected parents, the team produced three additional deep-sequencing data sets to assess the allelic ratios of 107 representative mutations. While a de novo mutation present in the child’s germline is typically present at a 50 percent allelic ratio, a lower ratio might suggest that that the mutation arose during embryogenesis.

Of these 107 mutations analyzed, seven (6.5 percent) were not detected in the parents’ germlines. Four de novo mutations—from a total of 4,081 suspected de novo mutations  identified—occurred with a 50 percent frequency in the child but at a much lower frequency (about 3.5 frequency) in the blood samples of one of the parents. Despite the difference in frequency, the parent likely transmitted this mutation to the child through the germline, the researchers noted.

“Given the limitations of current sequencing technologies, this [frequency of mosaic mutations] may be just touching the tip of the iceberg,” said Philip Awadalla of the Ontario Institute for Cancer Research and the University of Toronto, who works on human population and medical genomics but was not involved in the current study.

Hoischen agreed. “This is probably a conservative estimate of these mutational events,” he said. While an allelic ratio between 20 percent and 40 percent hints at a mosaic mutation, currently genome-wide approaches cannot distinguish between noise and a low prevalence mutation for those mutations detected at a 10 percent ratio or less, he added.

The team also used modeling to determine the minimal allelic ratio for each of the sequencing techniques that likely reflects a true mosaic mutation rather than sequencing-related noise. While the current genomic sequencing standard is the need for at least 30-fold coverage, the authors suggested that at least 100-fold coverage is needed to identify true mosaic mutations present at an allelic frequency below 40 percent.

These results raise questions about the level of mosaicism in other tissues, the frequency with which these mutations are passed on to the next generation, and whether they might contribute to disease, said Awadalla.

“The textbook knowledge that our genome is identical in all the cells of our body is probably not true,” Hoischen told The Scientist.

“We consider ourselves as ‘individual’ partially because our genomic makeup is unique,” said Goriely. “But we are multicellular organisms, containing many populations of cells precisely organized into different tissues and organs. This study suggests that some of our cells carry different versions of our genomes. . . . The implication of this finding is profound, both from a clinical and a philosophical standpoint.”