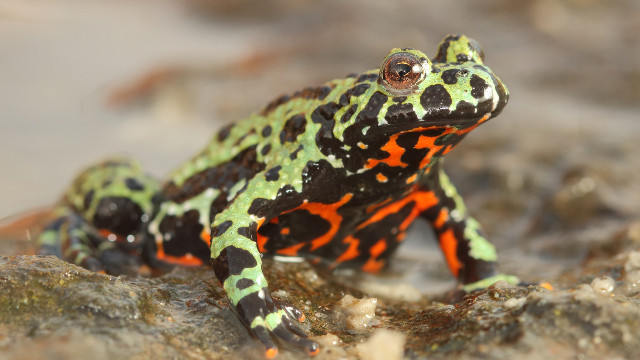 Oriental fire-bellied toad from South KoreaFRANK PASMANSIn recent decades, large populations of frogs, toads, and salamanders in disparate regions of the world have been succumbing to the deadly chytridiomycosis disease caused by the fungus Batrachochytrium dendrobatidis. The sudden and dramatic die-offs have prompted a large-scale research effort to pinpoint the source of the deadly fungus, and now the results of that research are in.

After analyzing the genomes of hundreds of B. dendrobatidis samples collected from wild and captive amphibians in Australia, North and South America, Africa, Asia, and Europe, an international team of scientists reports in Science today (May 10) that the pathogen likely emerged from East Asia at the beginning of the 20th century.

“It’s the sort of study that we’ve needed for quite some time in the amphibian-chytrid world,” says ecologist Jason Rohr of the University of South Florida who was not involved...

“They have done years of work to gather and culture chytrid [specimens] from around the world, and to sequence all of them,” adds biologist Karen Lips of the University of Maryland who also did not participate in the research. “This is a very impressive paper.”

That’s one of the most ironic things. In the wild, [the fungus] takes off like wildfire, but in the lab it’s very delicate.—Karen Lips,
University of Maryland

Since 1998, chytridiomycosis—an infection of the skin that can lead to osmotic imbalance, organ failure, and death—has been pinned as the cause of mass die-offs and even extinctions of amphibian species. But there has been a debate, says Rohr, regarding whether the chytrid fungus has become problematic because of changes to the environment (such as climate change or pollution), because novel strains of the fungus have been introduced to populations lacking evolutionary experience with the pathogen, or because of a combination of these two factors.

While this paper doesn’t fully resolve that particular issue, says Rohr, “it does suggest that, at least in certain parts of the world, some [B. dendrobatidis] isolates are completely novel—they have been introduced somewhat recently.”

Tracking down the origin of the fungus should have been a simple case of collecting samples from around the globe and comparing their genomes—in much the same way that genetic studies of HIV-1 revealed the virus’s likely origin as central Africa. But epidemiologists Simon O’Hanlon and Matthew Fisher of Imperial College London who led the B. dendrobatidis research say it wasn’t as straightforward a task as it might seem.

The fungus is “fantastically difficult to culture,” says Fisher. “For instance, we’d go to the French Guiana rainforest and spend a couple of weeks crawling through the undergrowth catching poison dart frogs and taking biopsies [of toe-web skin], and in that particular trip I think we sampled 450 animals and we got three isolates of the fungus.”

“That’s one of the most ironic things,” concurs Lips, “in the wild, [the fungus] takes off like wildfire, but in the lab it’s very delicate.”

Because of the assorted technical challenges of culturing B. dendrobatidis, it’s taken more than a decade to generate the panel of 234 isolates used in this research, 177 of which were newly collected for this paper, says Fisher.

The team sequenced the genomes of the 177 new isolates and, with the 57 previously decoded ones, performed DNA comparisons. These analyses identified known lineages of B. dendrobatidis—including BdGPL the predominant strain found around the globe and responsible for the panzootic disease—as well as two lineages present in new Asian isolates—BdASIA-1 and BdASIA-2. Importantly, the results strongly indicated that BdASIA-1, identified in samples from Korea, is the ancestral population that gave rise to BdGPL.

From assessments of the mutation rates of the pathogen’s nuclear and mitochondrial DNA, the team went on to estimate that it emerged from Asia between 120 and 50 years ago. This time frame, say the authors, coincides with an expansion of the global amphibian trade.

Knowing the origin of B. dendrobatidis is important, says Lips. “If we know it’s probably coming out of Asia in shipments of live animals . . . then that’s where we need to focus our conservation efforts and our policy efforts,” she explains. “If it was flying around by itself in the air, then that would need a whole different set of approaches to try and mitigate the impact.”

The results suggest “we should probably take action to slow or halt the movement of the pathogen around the planet,” says chytridiomycosis researcher Jamie Voyles of the University of Nevada who was not involved in the study. Such action could include “limiting the movement of the animals, or at least having a screening process,” she suggests.

But if the disease is already across the globe, wouldn’t such policies be equivalent to closing the stable door once the horse has bolted? Not entirely, says Lips. Aside from the known lineages, the researchers identified three hybrid strains of the fungus, indicating that different varieties could readily swap genes. They also found representatives of all lineages in samples taken from amphibian species that are known to be traded. “What this paper shows is that [B. dendrobatidis] is not one thing. It’s a whole portfolio of pathogens,” says Lips. “So yeah, maybe one horse got out, but there are other horses in the barn that we want keep there.”