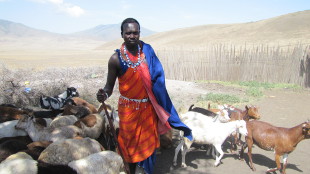 Maasai man, who took part in the study, with goats in TanzaniaUNIVERSITY OF PENNSYLVANIAA study of lactase persistence in African populations led by researchers at the University of Pennsylvania bolsters geneticists’ knowledge of variants influencing the human ability to break down lactose, a disaccharide and the primary carbohydrate found in milk, into the monosaccharides glucose and galactose. The team’s work, published today (March 13) in The American Journal of Human Genetics, includes analyses of the genetic backgrounds of the variants as well as their geographical distribution to suggest potential pathways by which lactase persistence-associated single-nucleotide polymorphisms (SNPs) might have arisen in Africa.

“This is the largest study to date of the genetic basis of lactose tolerance across Africa,” said Penn’s Sarah Tishkoff, who led the study.

“The work is interesting as many ethnic groups from Africa were studied and haplotypes were constructed that gave data about...

The continued expression of lactase beyond childhood enables humans to drink milk and reap its nutrients into adulthood. The enzyme is encoded by the gene LCT, found on human chromosome 2. LCT expression, scientists had previously found, is regulated by several genetic variants found within introns 9 and 13 of another gene, MCM6, which lies upstream. In adults of European ancestry, the SNP C/T-13910, within MCM6’s intron 13, is the primary genetic element behind lactase persistence. Other research groups had previously found that this region of intron 13 is a transcription factor binding site and enhancer of LCT expression. In Africa and the Middle East, however, there are pastoral populations who drink milk, yet lack T-13910, leading scientists to investigate whether some other variants conferred lactose tolerance in these groups.

With that question in mind, the researchers sequenced regions of introns 9 and 13 of MCM6 and about two kilobases of the LCT promoter in 819 individuals from 63 African populations as well as 154 people from Europe, Asia, and the Middle East. A subset of these study participants took a lactose tolerance test, which involved drinking a lactose solution and undergoing periodic blood glucose screens.

The researchers also determined the genetic background of each variant by genotyping four microsatellite repeats in the regions of interest and reconstructing the layouts of the individual chromosomes, or haplotypes, on which the variants lie. By comparing the frequencies of each variant in different geographic regions, both in Africa and in other parts of the world, they were able to hypothesize where the African lactase persistence-associated mutations originated.

“We were able to infer an East African origin for the C-14010 variant, a NE [Northeast] African origin for the G-13907 variant, and a Middle Eastern origin of the G-13915 variant,” wrote Penn’s Alessia Ranciaro in an e-mail to The Scientist. “We demonstrate that analysis of the geographic distribution of the LP variants are highly informative for reconstructing historic migration events and to trace the history of pastoralism in Africa.”

For example, the researchers found C-14010 in people from both Eastern and Southern Africa, leading them to speculate the variant may have spread southward throughout history.

While the researchers did identify the European variant T-13910 in North African populations, they did not find a significant link between the variant and lactose tolerance.

Dallas Swallow of University College London, who has also studied lactase persistence within African populations but was not involved in the present study, cautioned that it is still difficult to determine how lactase persistence-associated variants spread.

“If you think about the frequency of a particular allele, it’s very tempting to assume that the place where that allele is found most frequently is the place where it originated. But the problem is that you don’t really know where the ancestors of those people who are living there now were living then,” she said. “One of the issues [that] is particularly relevant to pastoralist people is that they might move around a lot, they migrate.”

Swallow proposed combining sequencing data with computer models of gene spread and relevant historical information as another approach to tracing the spread of lactase persistence throughout history.