It was a simple but insightful experiment. At the turn of the 20th century, American biologist Edmund Wilson squashed starfish eggs under a microscope and watched what happened as cellular material spilled out between two glass coverslips. He noted that the cellular goo contained spherical globules that fused into larger globules—behavior characteristic of liquid droplets suspended in another, chemically distinct liquid. Wilson also observed that only droplets of the same type (which he judged by their color or apparent density) fused upon contact with each other.

These observations led Wilson to conclude that “the living protoplasm” contains numerous liquid droplets that vary in their “chemical nature.”1 Despite having...

In addition to membrane-encased organelles—the nucleus, mitochondria, and Golgi apparatus, to name a few—eukaryotic cells harbor a variety of compartments that lack a casing. These protein-based liquid globules, called membraneless organelles, selectively permit entry of enzymes and substrates to carry out various cellular functions that would be less efficient or not possible at all in the cytoplasm. The structures are highly dynamic, and range in size from 0.1–3 micrometers in diameter, far bigger than just a few molecules clustered together or than multi-component molecular machines such as ribosomes (which are about 0.03 micrometers in diameter).

As in vinaigrette left on the countertop, segregation of droplets of different com­positions appears to be a natural charac­teristic of a cell’s innards.

Globules can even occur within other organelles. The nucleolus, the largest and most prominent compartment lacking a membrane, is found in the nucleus of almost all cells. First described nearly 200 years ago, this globular structure is now known to play critical roles in ribosome formation. Other membraneless organelles are found only in certain cell types, where they have more-specialized functions.

In the past decade, researchers have learned that a well-known phenomenon known as liquid-liquid phase separation governs the formation and function of several of these large membraneless structures. The emerging picture of the inside of the cell is that the cytoplasm and nucleoplasm are complex fluids that can stably segregate, like a cruet of oil and vinegar. Borrowing knowledge from fields such as physical chemistry and soft matter physics—where theories explaining liquid-liquid phase separation have informed the development of products ranging from stabilizers in processed foods to cosmetics, from therapeutic ointments to paints—biologists are now developing a new understanding of the nearly two dozen types of membraneless structures characterized so far. 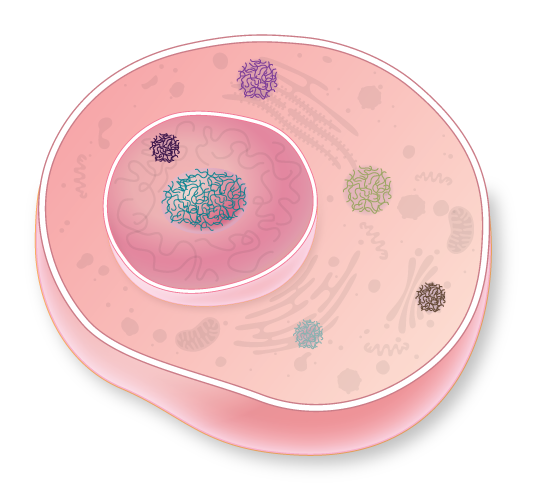 Seeing the internal cellular environment as a fluid that contains multiple liquid droplets functioning as membraneless organelles marks a turning point in our understanding of cell biology. The concept is young, and how and why liquid-liquid phase separation organizes the intercellular space remain open questions. But already, it is clear that the phenomenon underpins the formation and functionality of a growing number of long-observed membraneless organelles. And researchers are now learning that it could play a role in the aggregation of proteins associated with disease. (See sidebar below.) As details of the influence of phase separation on cellular features emerge, the biological community will come to see the cell in a new light.

As in vinaigrette left on the countertop, segregation of droplets of different compositions appears to be a natural characteristic of a cell’s innards. But the varied droplets in a cell’s cytosol or nucleus are functional: they carry out specific biochemical functions. And whereas the liquid-liquid phase separation in a vinaigrette occurs because oil molecules and water molecules repel each other, phase separation inside cells results from the properties of particular biological polymers—large molecules made up of many subunits (monomers) strung together in a chain.

For the droplet to retain liquid-like properties, the polymer chains inside it must be able to rapidly move past each other. To achieve this, the chains must be highly flexible and capable of engaging in multiple, weak interactions with one another. Longer chains undergo phase separation more readily than shorter chains of a similar monomer composition, as a longer chain can engage with more molecules. In sum, polymer phase separation depends on polymer chain length, chain flexibility, the number and strength of interactions the polymer can make, and the overall polymer concentration with respect to the solvent. The physical properties of these polymers also dictate whether other molecules are permitted into or excluded from these structures.

Polymers are common in biology and include carbohydrates, nucleic acids, lipids, and proteins. Of these, proteins have the greatest variety of sidechain chemistries—through amino acid sequence variation as well as posttranslational modification—and therefore provide the greatest range of polymer flexibility and interactions. Protein chain length and monomer sequence are genetically encoded, and the overall concentration of a protein is regulated at three levels: transcription, translation, and degradation. This high level of control makes proteins ideal components to promote regulated liquid-liquid phase separation. Indeed, proteins form the basis of almost all known membraneless organelles.

The notion that highly flexible proteins perform important biological roles goes against the long-held dogma that, in order to be functional, a protein must adopt a defined three-dimensional structure. Until the late 1990s, scientists thought that such highly flexible proteins were extremely rare. Since then, researchers have identified more of these so-called intrinsically disordered proteins (IDPs)—which likely account for approximately 30 percent to 40 percent of proteins in a human cell. IDPs have also proven to be functionally important in contexts such as cell signaling, transcriptional regulation, and, consequently, cancer. Over the past decade, IDPs that undergo liquid-liquid phase separation in living cells have emerged as an important subset of these flexible proteins. Such IDPs appear to form the bulk of phase-separated membraneless organelles, and are likely to have a major influence on the physical and biochemical properties of these structures.

Like their membrane-bound counterparts, membraneless organelles allow cells to compartmentalize their interior, bringing compounds together to control reaction rates and cordoning off toxic agents. Cajal bodies of the nucleus, for example, play important roles in processing messenger RNAs, and germ granules in germline cells protect the genome from transposon activity.

To better understand how the chemical environment inside the membraneless organelle droplet can support these functions, researchers have developed model membraneless organelles composed of one or two highly flexible protein types. For example, using regions of a protein called Ddx4—a primary protein component of germ granules—I (T.N.) and my University of Oxford colleague Andrew Baldwin found that the organelle interior is in some ways more like an organic solvent than water.2 Reactions that would not occur in the rest of the cell could therefore proceed inside a phase-separated liquid droplet, where chemical conditions may be far more favorable. 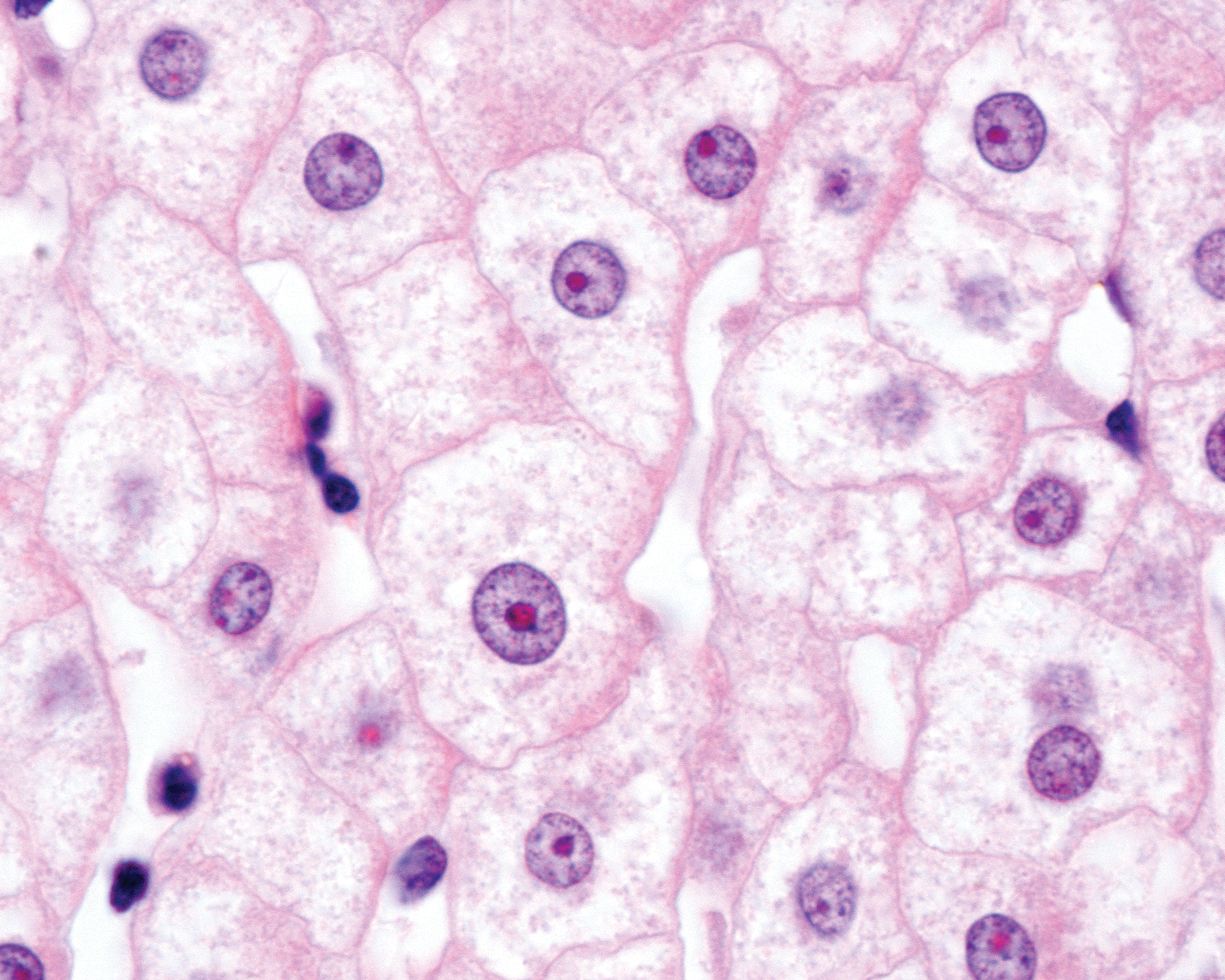 Princeton University chemical and biological engineer Clifford Brangwynne has advanced this concept even further by conducting experiments demonstrating that the nucleolus consists of at least three distinct phase-separated layers—droplets within droplets within droplets. The nucleolus is responsible for ribosome biogenesis, a complex process that involves folding, modifying, and assembling RNA and hundreds of different proteins. Brangwynne and his colleagues suggest that these tasks may be carried out sequentially through the specialized zones, likening the nucleolar layout to an assembly line.3

To date, the nucleolus is the only characterized example of this type of multiphase organization, but in 2016, researchers imaged membraneless organelles called stress granules with super-resolution microscopy and found evidence that they may have similarly concentric internal structures,4 suggesting that droplets within droplets could be a common theme of cellular organization.

In order to perform specific biological functions, membraneless organelles must be able to control the passage of molecules. To enter or leave a membrane-encapsulated organelle, a molecule must traverse its lipid bilayer. Typically, this occurs via pores that serve as selective barriers, only permitting the passage of certain molecular species. Without either a surrounding physical barrier or pores, membraneless organelles control the transit of molecules using fundamentally different processes.

Whether a molecule will be absorbed depends on how soluble it is inside the membraneless organelle. In other words, is it more attracted to the environment created by the polymers that constitute the droplet interior or to the surrounding solvent? Anyone can easily observe these principles in action using just three ingredients. In a glass of oil and water, an added drop of food coloring will fall through the oil and diffuse into the water due to its different comparative density and solubility in each of the two layers. Given that membraneless organelles in cells consist of many more than three ingredients, predicting the solubility of a given molecule is a formidable task.

To gain insight in this area, many researchers are now reconstituting simplified membraneless organelles in the lab from their components, and testing the extent to which other biomolecules are absorbed or excluded. Even these simplified systems exhibit complex patterns of partitioning for individual proteins and nucleic acids.

For example, recent work by myself (T.N.) and Baldwin investigated which oligonucleotide conformations are absorbed or excluded by our model Ddx4-protein droplets. This work revealed that the extent to which a synthetic nucleic acid is absorbed or excluded depends on a combination of its length and whether it is a flexible, single-stranded chain with exposed bases or a rigid double helix.5 Additionally, these droplets preferentially absorb compact RNAs bearing stem-loop structures.

Due to proteins’ variety of sizes, shapes, and surface chemistries, the rules governing their partitioning are far more complex. The partitioning properties of proteins and nucleic acids can even affect each other. For example, a protein that is highly absorbed by a model membraneless organelle droplet can import with it a nucleic acid that, on its own, would be excluded.

In the last few years, the concept that cells use liquid-liquid phase separation as a basic means of internal compartmentalization has generated a lot of excitement in the research community. Part of the reason why this idea has taken hold may be because we are all familiar with the phase separation of liquids in our everyday lives.

Given that the cytoplasm and nucleoplasm of cells are themselves complex liquids, it may not be surprising that phase separation can occur in this environment. In fact, due to the nature of biological polymers, such dynamics may be inevitable.

As details of the influ­ence of phase separation on cellular features emerge, the biological community will come to see the cell in a new light.

The ideas are simple, but the concept of intracellular liquid-liquid phase separation as a fundamental organizing principle is powerful. It offers a new perspective on the nature of biological matter and provides a unifying conceptual framework in which to consider many different membraneless organelles that researchers had previously seen as distinct. Viewing the cell through this new lens enables researchers to ask fresh questions and gain novel insight into the mechanisms of several cellular activities. While there are far more questions than answers regarding intracellular phase separation, now that scientists know these dynamics exist within the cell, it’s hard to imagine life without them.

Michael Crabtree is the Todd-Bird Junior Research Fellow in Biochemistry at New College, Oxford, and a postdoctoral research associate in cell biologist Tim Nott’s lab at the University of Oxford.