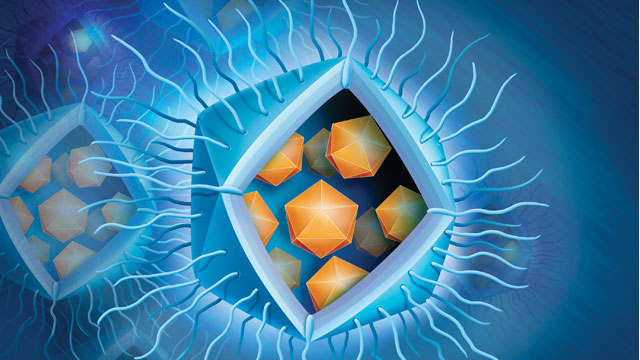 The theory of evolution was first proposed based on visual observations of animals and plants. Then, in the latter half of the 19th century, the invention of the modern optical microscope helped scientists begin to systematically explore the vast world of previously invisible organisms, dubbed “microbes” by the late, great Louis Pasteur, and led to a rethinking of the classification of living things.

In the mid-1970s, based on the analysis of the ribosomal genes of these organisms, Carl Woese and others proposed a classification that divided living organisms into three domains: eukaryotes, bacteria, and archaea. (See “Discovering Archaea, 1977,” The Scientist, March 2014) Even though viruses were by that time visible using electron microscopes, they were left off the tree of life because they did not possess the ribosomal genes typically used...

Recently, however, the discovery of numerous giant virus species—with dimensions and genome sizes that rival those of many microbes—has challenged these views. (See illustration.) In 2003, my colleagues and I announced the discovery of Mimivirus, a parasite of amoebae that researchers had for years considered a bacterium.1 With a diameter of 0.4 micrometers (μm) and a 1.2-megabase-pair DNA genome, the virus defied the predominant notion that viruses could never exceed 0.2 μm. Since then, a number of other startlingly large viruses have been discovered, most recently two Pandoraviruses in July 2013, also inside amoebas. Those viruses harbor genomes of 1.9 million and 2.5 million bases, and for more than 15 years had been considered parasitic eukaryotes that infected amoebas.2

With the advent of whole-genome sequencing, researchers are beginning to realize that most organisms are in fact chimeras containing genes from many different sources—eukaryotic, prokary­otic, and viral alike.

Now, with the advent of whole-genome sequencing, researchers are beginning to realize that most organisms are in fact chimeras containing genes from many different sources—eukaryotic, prokaryotic, and viral alike—leading us to rethink evolution, especially the extent of gene flow between the visible and microscopic worlds. Genomic analysis has, for example, suggested that eukaryotes are the result of ancient interactions between bacteria and archaea. In this context, viruses are becoming more widely recognized as shuttles of genetic material, with metagenomic studies suggesting that the billions of viruses on Earth harbor more genetic information than the rest of the living world combined. (See “Going Viral,” The Scientist, September 2013.) These studies point to viruses being at least as critical in the evolution of life as all the other organisms on Earth.

Despite the fact that viruses use the same genetic code as verifiably living things, science long classified them as mere collections of biomolecules. And because scientists assumed that viruses had both an upper size limit of just 0.2 μm and a parasitic nature, they classified them in a not-quite-biological world of their own.

That thinking started to change in the early 2000s, when my colleagues and I identified an unknown virus living inside an amoeba. It was as big as some bacteria and archaea and was visible under an optical microscope—qualifying it as a microbe under Pasteur’s original definition. I named it Mimivirus as a personal joke about the stories that my father, a biomedical scientist, told me when I was a child to explain evolution; the stories were based on the life of “Mimi the amoeba.” I initially disguised the true source of this name, however, pretending that Mimivirus came from “MiMicking microbe.”
Resarchers had first noticed Mimivirus in 1992, but based on its appearance under light microscopy it had been considered an intracellular bacterium for several years. Transmission electron microscopy images depicting its ultrastructure, along with the determination of its genome sequence in 2004,3 however, confirmed that it was, in fact, part of the viral world. Mimivirus has no ribosomal genes, but its genome contains more than 1,200 genes—three times more than any virus known at the time. Its genome is larger than that of many bacteria and archaea and comparable to some eukaryotic genomes. Mimivirus was no ordinary virus.

Unlike most other viruses, Mimivirus carries genes that encode translational machinery for replication. Its genes encode what is known as the “viral factory,” a ribosome-less transcription-and-translation system that copies the Mimivirus genome and assembles viral offspring. The system gathers nucleotides from the virus’s host, draining the amoeba’s nucleus of its own DNA and digesting it into individual nucleotides that are reassembled into Mimivirus sequences. Within about 16 hours, the amoeba is dead, and a single virus has replicated into 10,000 particles in an incredibly rapid and dynamic process.4

Since this initial discovery, scientists have isolated a number of other giant viruses from hosts such as algae, flagellates, and other amoebae. Genes identified in metagenomic studies hint at the presence of such giant viruses all over the world. Researchers are now searching in earnest for new giant viruses, and numerous groups are scouring myriad environments for more clues about this new viral form. In our laboratory alone, we have found more than 50 different types of giant virus belonging to two new viral families: Mimiviridae and Marseilleviridae.

Analyzing the genomes of these viruses, we realized that they are chimeras—in other words, these giant viruses exchange genetic material with their hosts and with other parasites that share the same hosts. The viruses also share several genes with large DNA viruses, a class of viruses too small to be viewed under an optical microscope. Large DNA virus genomes range from 50 to 200 kilobases and have similar architecture: a variable region comprises genes from other organisms, and a more stable region is unique to the viruses. This genome architecture is largely shared by the giant viruses known to science, prompting the field to classify them as a new order, Megavirales, and place them as a sister group to large DNA viruses in the viral tree.5 Extreme diversity in the genomic variable regions favors the hypothesis that these virus lineages are as old as those of other microbes on Earth.

A fourth branch of life?

Living particles that could be seen under the optic microscope were first lumped into one category, the microbes; then split into two categories, when Édouard Chatton distinguished between eukaryotes and prokaryotes in the first half of the 20th century; and next grouped into three categories, when Carl Woese added archaea to the tree of life in 1977. Now, I propose that there are four.6 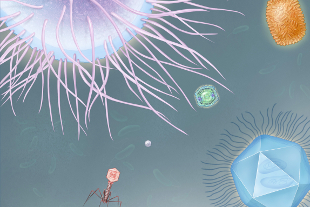 SIZING UP VIRUSES: Newly discovered giant viruses, with dimensions and genome sizes that dwarf most other viruses, are challenging scientists’ understanding of these ubiquitous pathogens.
See full infographic: PDF © LAURIE O'KEEFEThe available data show that some well-conserved genes of giant viruses could help reconstruct the evolutionary history of viruses. Of course, phylogenetic trees are typically constructed using ribosomal genes, which are totally absent in viruses. Viruses do, however, carry genes for transfer RNA and RNA polymerase. Trees constructed using these genes show that viruses are at least as old as the three traditional domains proposed by Woese. By clustering genes with a known function we found that four groups with different genetic repertoires emerged, corresponding to giant viruses, archaea, bacteria, and eukaryotes. In this way, giant viruses should take their place among microbes—and, more importantly, among the living—as a fourth branch of life. Whether viruses should be classified as a new domain, a superkingdom, or, as I suggested recently, TRUC (Things Resisting Uncomplete Classification), which means “stuff” in French slang, is still a matter of debate.7

By incorporating giant viruses into phylogenetic trees, we are now able to begin understanding their role in the evolution of life. Some giant virus genes are highly similar to each other, and to those of other microbe groups, suggesting these genes—and giant viruses—have an ancient origin. Some researchers, such as Patrick Forterre of Paris?Sud University and the Institut Pasteur in France, believe that giant viruses are the origin of the eukaryotic nucleus;8 the previously established theory of viral eukaryogenesis posits that large DNA viruses played this role.

Forterre and others even speculate that DNA was “invented” by viruses, helping to convert a world of RNA-based organisms to one where DNA became the pervasive unit of heredity. In part due to its catalytic potential, RNA is hypothesized to have been the molecular basis of first life on Earth. (See “RNA World 2.0,” The Scientist, March 2014.) Forterre argues that early RNA cells and ancient RNA viruses, perhaps derived from these early cells, coexisted at that time and that early RNA cells were likely to have been parasitized by these viruses. Evolving a genome of DNA could have guarded these viruses against attacks from their hosts, which may have begun to evolve RNA-specific defenses to protect themselves against viral infection. Then, as viruses borrowed and returned the genetic material of their hosts, they would have shared DNA genes, which are more stable and would have therefore been favored by natural selection.

While all of these theories are just that, and much work is needed to understand the origin and evolution of life on Earth, it is clear that the long-neglected viruses are central to answering these questions. 

Didier Raoult is director of the Research Unit on Infectious and Emerging Tropical Diseases at Aix-Marseille University, France. He has also served as the counsellor of the French Ministry of Health for Infectious Diseases and Bioterrorism, and he led French National Reference Center for Rickettsial diseases and a WHO reference center for arthropod-borne bacterial diseases.