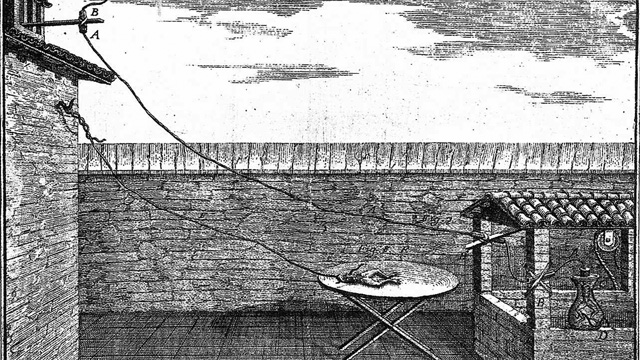 This illustration, from Galvani’s De Viribus Electricitatis in Motu Musculari, published in 1791, shows the experimental setup Galvani used to study the effect of atmospheric electricity on dead frogs.


In the mid-1780s, Italian physician Luigi Galvani connected the nerves of a recently dead frog to a long metal wire and pointed it toward the sky during a thunderstorm. With each flash of lightning, the frog’s legs twitched and jumped as if they were alive. It was this macabre scene that would inspire the British novelist Mary Shelley to write her gothic masterpiece, Frankenstein, 20 years after the physician’s 1798 death. But more importantly, through such experiments Galvani proved not only that recently-dead muscle tissue can respond to external electrical stimuli, but that muscle and nerve cells possess an intrinsic electrical force responsible for muscle contractions and nerve conduction in living organisms. Galvani named this newly discovered force “animal...

Galvani’s contemporaries—including Benjamin Franklin, whose work helped prove the existence of atmospheric electricity—had made great strides in understanding the nature of electricity and how to produce it. Inspired by Galvani’s discoveries, fellow Italian scientist Alessandro Volta would go on to invent, in 1800, the first electrical battery—the voltaic pile—which consisted of brine-soaked pieces of cardboard or cloth sandwiched between disks of different metals. But Volta voiced serious reservations about Galvani’s “animal electricity,” sparking an intense debate that would rage for the last six years of Galvani’s life. Volta believed the source of animal electricity was not intrinsic to the muscle tissue or nerve fibers themselves, as Galvani asserted, but that the animals reacted to electricity produced by two different metals used to connect their nerves and muscles.

In response to Volta’s skepticism, Galvani conducted a set of experiments that proved conclusively the existence of internal animal electricity. By touching exposed nerves to muscles or nerves to nerves, he recreated the same muscle contractions observed in earlier experiments, proving that no metals or external sources of electricity were needed. But Galvani’s “‘crucial experiment’ did not succeed in convincing Volta and his followers, and it passed by, practically unnoticed by the scientific community” until his experiments were picked up again decades later, writes Marco Piccolino, physiologist and coauthor of The Shocking History of Electric Fishes: From Ancient Epochs to the Birth of Modern Neurophysiology.

Earlier “balloonist” theories of muscle contraction, dating to Roman times, centered on the idea that hollow nerve fibers conduct air or fluid to the muscles, causing them to expand. Galvani believed that nerves were insulated by a nonconductive coating—which we now know as myelin—and that electrical impulses traveled through them to muscle cells via small holes, an idea that anticipated the structures that we know today to be ion channels. Two centuries of experimentation have confirmed that muscle contractions are initiated by electrical nerve impulses that can arise because ion pumps in cell membranes create different concentrations of ions, such as sodium and potassium, inside and outside the nerve cell—resulting in an electrical potential energy that is maintained across the membranes of the cells themselves. That potential is released as a nerve impulse when ion channels in the membrane open, briefly reversing the difference in charge. No metal wires or lightning bolts are required.