The blood vessel endothelial cells of the BBB are cemented together by protein structures called tight junctions (1), preventing diffusion of most molecules between cells. BBB endothelial cells display transporters (2), receptors (3), and channels (4) that facilitate selective transport of vital nutrients into the CNS. They also possess efflux pumps, such as P-glycoprotein, that expel most small, amphiphilic molecules that are soluble in the blood and in cell lipid membranes (5). Pericytes and astrocyte pseudopods serve as an additional physical barrier between the blood vessel and brain tissue, and support the expression of endothelial cell genes required to maintain the BBB. 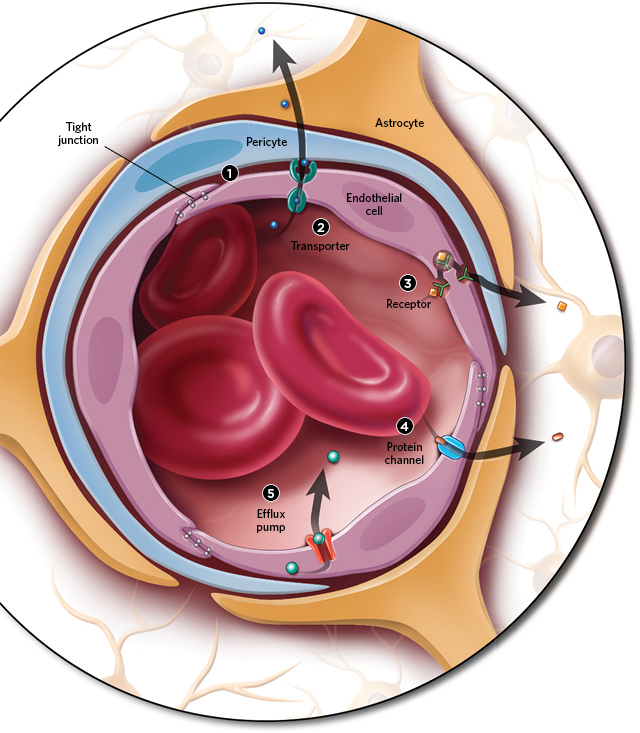 Designing drugs to reach the CNS requires some creativity on the part of researchers. The approaches vary from disrupting the BBB’s tight junctions with ultrasound waves and microbubbles to hijacking the barrier’s own transport systems. Each technique comes with its... 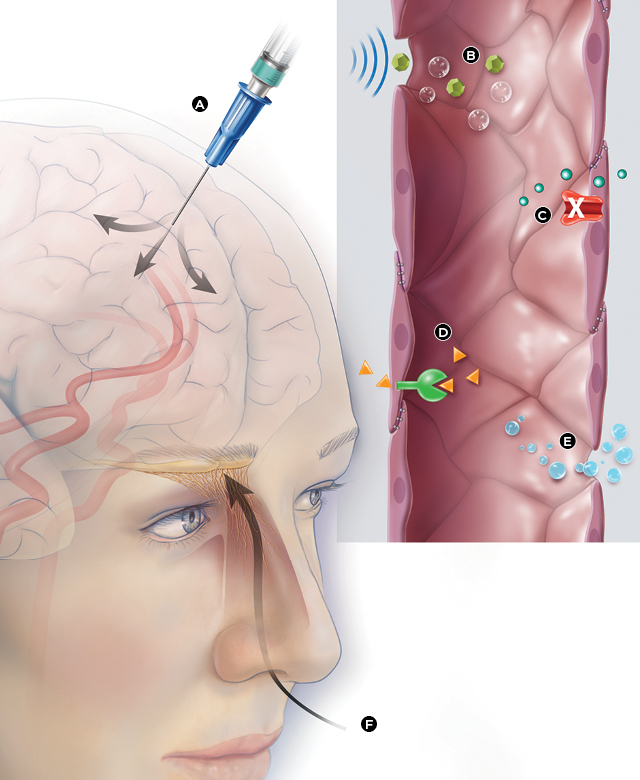 © 2017, LISA CLARK(A) Convection-enhanced delivery: Catheters placed in the brain through a hole in the skull allow the passage of even large drugs. Pressure is used to infuse a drug as evenly as possible into a specified region of the brain.

(B) Opening the BBB: After injecting microbubbles into a patient’s bloodstream, researchers apply low-energy ultrasound waves that cause the bubbles to swell and contract. This oscillation weakens the BBB and reduces the abundance of tight junction proteins, reversibly opening the barrier to allow the delivery of a drug from the blood to a targeted region of the brain.

(C) Passing the pumps: Amphiphilic compounds—those that are soluble in the blood and in cell lipid membranes—can reach the CNS by entering and exiting BBB endothelial cells. Most of these molecules are expelled from the endothelial cells back into the bloodstream through efflux pumps. To get around this barrier, researchers alter drugs to avoid binding to such pumps or use compounds that hinder pump activity.

(E) Osmotic diuretics: When solutions of diuretics are injected into the carotid artery, they draw fluid out of BBB endothelial cells, causing the cells to shrink. This leaves gaps between the endothelial cells, granting small and large molecules indiscriminate access to the entire brain for minutes to hours.

(F) Intranasal delivery: Drugs can also reach the CNS through the nose. Researchers are still studying the exact mechanism behind this transport, but compounds seem to be able to travel though the extracellular space surrounding the olfactory nerves, ending up in the cerebral spinal fluid.