ABOVE: Artist’s concept of the process of manufacturing blastocyst-like structures from cultured cells. The process starts with one cell type, progresses into a two-compartment structure, and finishes with the generation of a blastocyst-like structure displaying the first three lineages that appear during mammalian embryogenesis: epiblast in yellow, primitive endoderm in pink, and trophectoderm in blue. The shower depicts the growth factors and chemicals applied to the cells during the manufacturing process.
YANG YU

Asingle type of mouse stem cell can generate a structure in culture capable of self-organizing to generate both embryonic cells and those that are the precursor to the placenta, according to a study published today (October 17) in Cell. The work paves the way for a greater understanding of mammalian development and of things that can go wrong in very early pregnancy.

The authors have generated structures that have some of the properties of a...

Despite years of research, the information scientists have about development during preimplantation—the time after an egg is fertilized but before the embryo settles in to the uterus—is limited, says Jun Wu, a biologist at UT Southwestern Medical Center. To address this lack of information, he and his colleagues set out to build an early embryo or something like it. Previously, scientists had come so far as building a blastocyst-like structure called a blastoid, which combined two types of stem cells. One of the limitations of these blastoids is that they were assembled to mimic a blastocyst, meaning the researchers couldn’t examine earlier development. They also stopped developing pretty early because they were missing a tissue called a primitive endoderm, the precursor to the yolk sac. 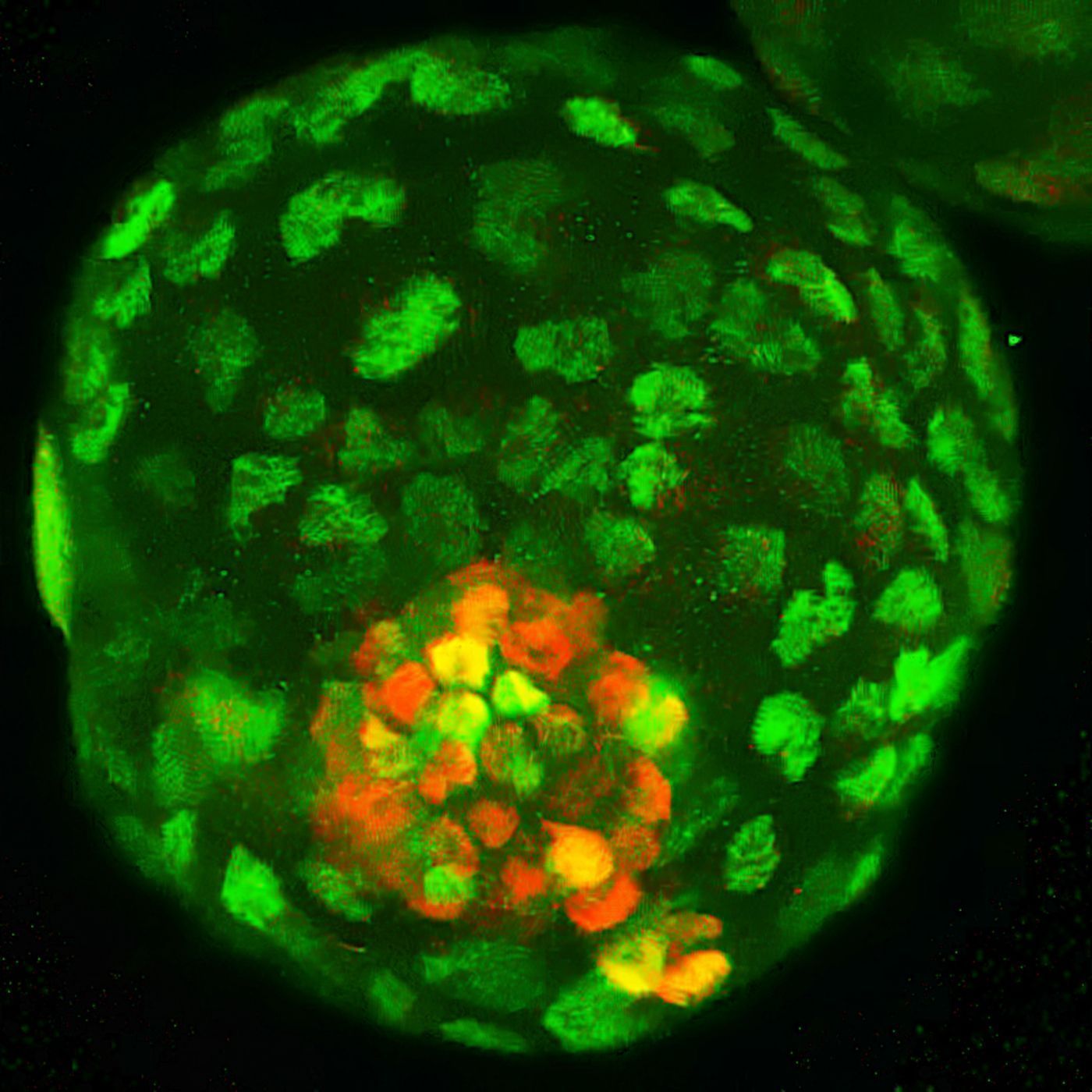 Wu’s team turned to extended pluripotent stem (EPS) cell lines established by treating mouse embryonic cells or adult skin cells with a special cocktail that helps them maintain pluripotency. The team combined a three-dimensional culture system, a suite of growth factors and signaling molecules, and both media used for growing embryos and that used for stem cells derived from the trophoblast, the tissue that gives rise to the placenta.

One EPS cell—originally derived from a mouse embryonic cell—growing alone didn’t last in the culture system. But when the researchers cultured a single antibiotic-resistant EPS cell with a group of non-resistant EPS cells and then treated the cells with an antibiotic to gradually kill the non-resistant cells, they got clonal blastoids from the single resistant cell about 3 percent of the time. They were also able to grow blastoids from EPS cells originally derived from adult mouse fibroblasts.

By the fifth day of growth, the blastoids looked similar to blastocysts at four and a half days of development: a hollow ball of cells with a group of cells clustered together inside. By day five or six, the EPS blastoids contained cells with similarities to all three cell lineages found in blastocysts: trophectoderm, primitive endoderm, and epiblast, which gives rise to the embryo. When the team allowed the blastoids to further develop in culture, they saw some structural and gene expression similarities to post-implantation mouse embryos.

They also did bulk and single-cell RNA sequencing analyses of both blastoids and blastocysts. “We looked at all the genes that are expressed in each different cell type in our structure compared to a normal embryo and . . . there are indeed a lot of differences” between blastocysts and blastoids, says Wu. “In the future, I think this will lay the foundation to continue to understand what the function is of some of the genes that are differentially regulated between our structure and in vivo embryos.”

Finally, Wu and colleagues implanted blastoids or blastocysts into the uteruses of surrogate mice. The blastoids readily induced placenta precursor structures, though these were malformed and delayed and varied in size much more than the blastocyst-induced structures. Tissues formed by implanted blastoids themselves displayed some embryonic markers, but the tissue was disorganized, in sharp contrast to the well-formed control embryos.

“The most important question is: why do those stem cells not fully develop into an embryo?” says Nicolas Rivron, a biologist at the Institute of Molecular Biotechnology at the Austrian Academy of Sciences. Rivron was not involved in the current study, but he led the team that used two stem cell lines to generate blastoids—work that was published in 2018. “By creating those structures from the bottom up, we come across all kinds of problems that the stem cells encounter in order to develop,” which could give insight into developmental processes and pregnancy, he says, adding that it’s important to think about the blastoids as models. “These are entities that are extremely different from embryos and that in no way should be thought [of] as tools or structures to direct reproduction.”

“The real holy grail is: can you do this with human stem cells,” says Rossant. “These stem cell–derived embryo models may not completely mimic normal development, but it might be enough to get you a little bit further in understanding the ways that the extraembryonic and the embryonic lineages can talk to each other in human development.”