Update (November 17): A tentative contract agreement has been reached between the Harvard Graduate Student Union and the university administration, with a full union ratification vote set for this week, reports Inside Higher Ed.

Led by the Harvard Graduate Students Union-United Auto Workers (HGSU-UAW), the strikers demand compensation rates that keep pace with inflation and rising living costs in Boston, according to Times Higher Education. Furthermore, the union is asking for a more objective complaint process for sex discrimination cases with the inclusion of third-party experts in university panel hearings. Finally, the union demands a “union shop”—a clause in the union contract which automatically affords membership to graduate student workers and enforces mandatory dues for union protections.

Harvard’s Office of the Provost issued a statement preparing for a possible strike back in August 2021, cautioning schools and departments to plan for strike impacts on normal university functions. Harvard also issued an update to the HGSU-UAW Contract Renewal Negotiations on October 26, the day before the strike was scheduled to begin, proposing a “$21-million increase to student worker compensation and benefits.” In this statement, Harvard University Provost Alan Garber includes a 13 percent increase in student worker compensation over four years and a minimum hourly wage of $20, more than the Massachusetts minimum hourly wage of $13.50. The proposal also commits to arbitration and mediation of discrimination cases and the establishment of a legal fund for student workers in need of attorney advice on work related issues.

No statement has been made regarding the union shop, though Times Higher Education reports that the university is against it. Irene Wong, a PhD candidate in Harvard’s a Biological and Biomedical Sciences Department who has been actively participating at the picket lines of the strike, tells The Scientist in a Twitter DM that the shop clause is among the “main striking points.” 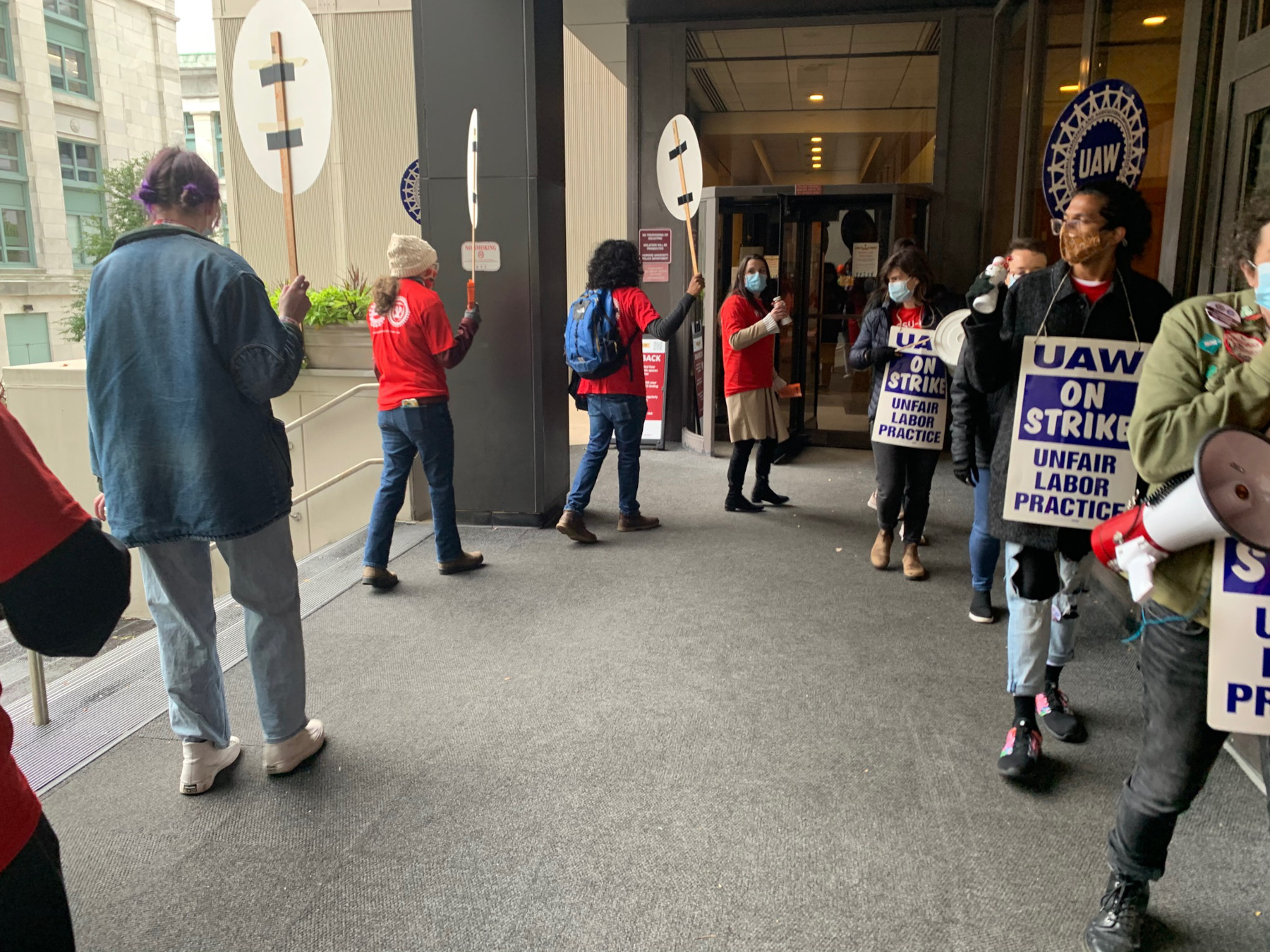 “Because the HGSU-UAW is an open shop union, not all science grad students are union members. We have to elect to become union members to get union fees deducted. Because of this, student membership remains spotty across campus, especially [in] the life sciences,” Wong explains, adding that a union shop with automatic membership “is a much more common and robust model of labor unions across the country. Union security is highly important to have power when dealing with Harvard administration.”

She writes that it would be ideal if “Harvard can meet the union’s demands for fair pay, union security, and real recourse for victims of sexual harassment or discrimination on campus,” but that she’s unsure that will happen. “The bargaining committee has gone to the negotiation table with compromises, but Harvard administration has not been bargaining in good faith.”

Maya Anjur-Dietrich, an applied physics PhD candidate and member of the Harvard Graduate Students Union bargaining committee, tells Times Higher Education that the committee has been proposing “creative solutions” toward a fair agreement. “We are at the table, ready to make meaningful improvements to the lives of student workers, and we’re waiting for the administration to do the same,” she shares.

The HGSU-UAW was voted into existence in 2016; this strike is its second demonstration for change. The first, a strike in December 2019, lasted almost a month according to The Harvard Crimson student newspaper. A one-year deal followed, outlining preliminary health, safety, and employment policies. Almost two years later, HGSU-UAW conducted a vote to authorize its second strike, after this initial yearlong deal expired in August 2021, and left the union without a contract. An overwhelming 1,860 out of 2,029 members—almost 92 percent of union members—voted in favor of striking for a new deal.

Wong, whose lung regeneration studies involve mice, still goes to her lab every day to make sure her academic progress is not negatively impacted. “I had to work the entirety of day 1 of the strike but have removed myself from lab activities that are not necessary,” she notes. She further details that some grad students in research labs are unable to strike from their laboratory responsibilities because of the “delicate nature of planned experiments,” though others are striking in limited capacity like her or refraining from teaching obligations.

HGSU-UAW President Brandon J. Mancilla said in an interview with The Harvard Crimson that this second strike’s Friday deadline is “not a sign of us wanting to stop,” but “because we think we can make progress by talking.” Mancilla also stated that the union is committed to reaching a deal before the end of the strike. “And if we don’t, they will see the full extent of withdrawing our labor power.”

Wong hopes the strike will lead to a negotiated contract as soon as possible, as “striking really is not something we all LOVE to do,” adding that “it can be very disruptive when our research is directly correlated to our academic progress.” While she writes that three days is manageable to strike in a limited capacity with in vivo and in vitro experiments, if another, lengthier strike were to be enacted, it “would be more worrying for a biologist that depends on living organisms."