Cortical organoids—three-dimensional bundles of neurons and glia grown in a dish from induced pluripotent stem cells—look a lot like tiny brains. And while the gene expression, cell types, and organization found in these spherical structures have similarities to the developing cortex, it’s not clear whether they’re also an appropriate model in which to explore how neural networks form.

In a study published today (August 29) in Cell Stem Cell, researchers have shown that organoids derived from human stem cells produce brain waves that become more complex as development progresses. The synchronized neural activity can be blocked by drugs, a sign that cells were communicating with each other and forming functional neural circuits within the miniature brains.

The authors draw parallels between organoids’ neural patterns and those of the brains of preterm infants and point to them as evidence that cortical...

“The idea of organoids developed from fibroblasts that will give us patient-specific information is really exciting,” says John Huguenard, an electrophysiologist at Stanford University who was not involved in the study. “I’m a little less excited about the nature of the activity that they’re seeing. It’s a sign that they’re going in the right direction, [but] we’re just not quite there yet.”

Previous work has shown that neurons in cortical organoids are capable of firing here and there. Alysson Muotri, a biologist at the University of California, San Diego, tells The Scientist that he was initially skeptical that these organoids could create more sophisticated neural networks, at least in part because they’re missing some cell types found in the developing brain.

To explore this question, he and his team grew organoids from induced pluripotent stem cells derived from fibroblasts of healthy adult men and verified that cell types typically found in the cortex were organized into layers resembling those present in the developing brain. Then they plated the mini-brains on special culture dishes containing multi-electrode arrays used to record neural activity. 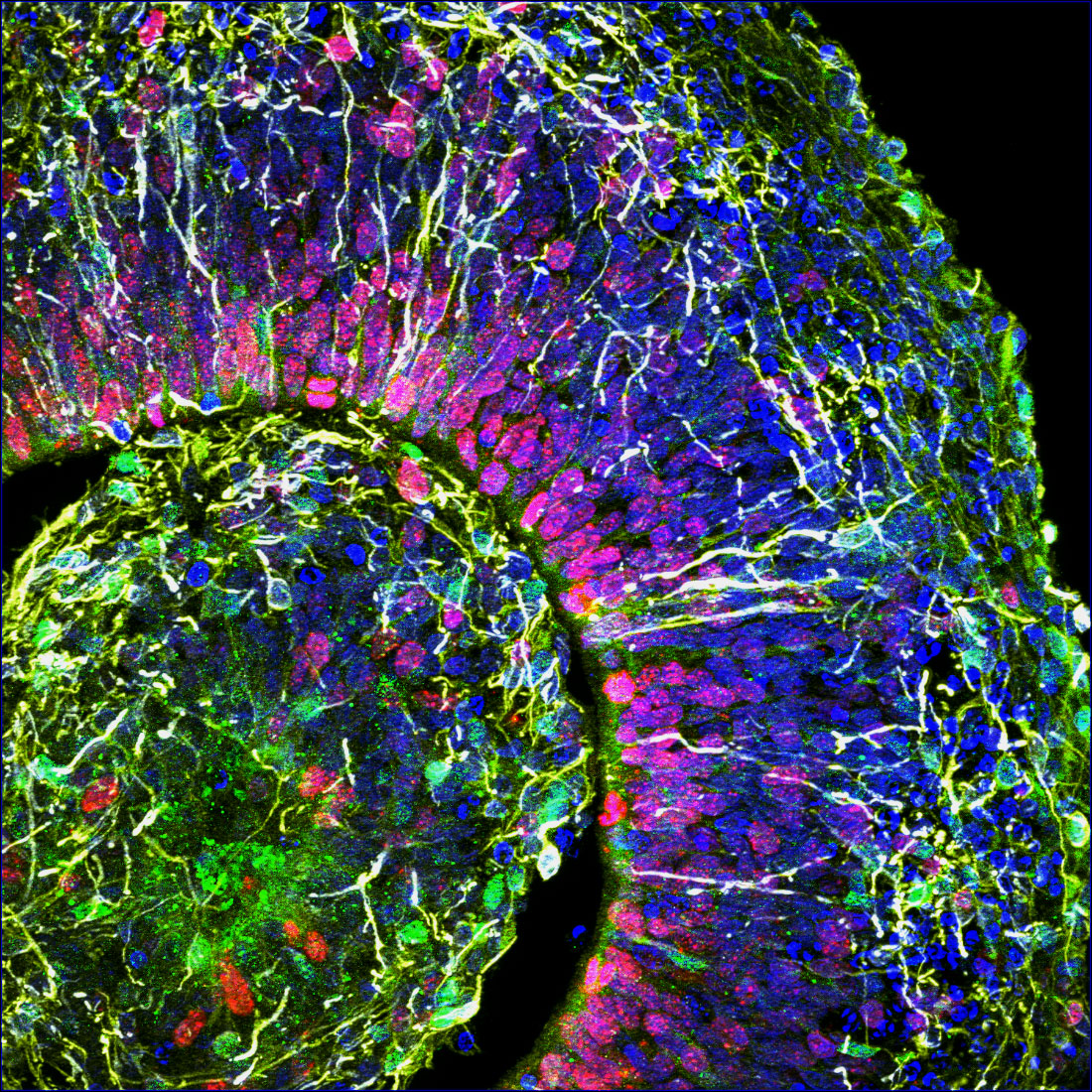 A cross-section of a human brain organoid
MUOTRI LAB, UCSD

When their cultures were about two months old, the researchers started to see some small oscillations—rhythmic spikes in action potentials across multiple neurons in the vicinity of the electrode arrays—that came and went. As the organoids matured, the neural activity continued to increase in frequency and complexity and could be disrupted with drugs that block synaptic activity, indicating that neural networks were present.

The authors next examined possible parallels between the organoids’ brain waves and the human brain. Using a collection of electroencephalogram (EEG) data from premature babies aged 24 to 38 weeks, they trained a machine learning program to determine the age of the subject based on the neural activity detected by the EEGs. When the research team fed the computer information from the brain organoids, it was unable to distinguish the data coming from an EEG from that collected by the multielectrode arrays from the organoids starting at about 25 weeks.

Muotri says that the result could mean that the electrical activity of the organoids follows a similar developmental trajectory as the human brain and that, in the future, this model system could be used to study conditions where neural networks function differently, such as epilepsy.

“I am happy to see that they also see similar network bursts to what we have shown previously, but they show that this activity does become more mature in this paper,” Madeline Lancaster, a developmental biologist the MRC Laboratory of Molecular Biology in the UK who did not participate in the study, writes in an email to The Scientist. “While the coordinated neural activity is interesting, it’s important to keep in mind what exactly is being measured,” she adds, explaining that brain waves are long-range coordinated firing of neurons with particular frequency that can immediately be detected without extensive data analysis using a simple EEG. Here, the authors are measuring very short-range network bursts using a multi-electrode array. Then, by extensively filtering the data, they are able to show particular frequencies, she says. “It should be stressed though that this is not the same as a brain wave.”

“It’s an intriguing and interesting report, but I think we have to be cautious about the comparisons that are made between the activity in the organoids and normal brain activity captured by EEG in premature human infants,” says Arnold Kriegstein, a stem cell biologist at the University of California, San Francisco, who was not involved in the work. He explains that, unlike developing brains in vivo, the organoids lack connections to other brain areas and are also missing inhibitory neurons, which underlie much of the EEG activity in the human brain. These and other issues raise questions about the mechanisms behind these oscillations and whether the circuits forming are anything like those of a real cortex.

“It’s still premature to use this kind of activity as a measure of normal versus abnormal activity in disease states,” Kriegstein says. “In the absence of more information about the evolution of normal activity, as well as more information about where this activity in the organoids comes from, how it’s generated, and what it depends upon, it’s going to be very difficult to decide how this could be altered in a disease.”