Update (October 11): The British Journal of Sports Medicine (BJSM) has retracted nine articles and placed expressions of concern on an additional 38 in which McCrory, who was previously the journal’s editor-in-chief, was the sole author, according to a press release by the journal. In an editorial published by the journal on October 10, high-level staffers of the BJSM and the British Medical Journal (BMJ) say that five retractions were due to plagiarism and three were due to redundant publication. The last article was retracted after McCrory “inaccurately quoted and misrepresented the position” of another researcher as a key support for his argument.

Update (September 26): Concussion expert Paul McCrory has since been accused of 10 additional cases of plagiarism, The Guardian reports. The new incidents, first shared by Nick Brown, a data analyst at Linnaeus University in Sweden, cover papers published between 2001 and 2018 in which McCrory is alleged to have recycled his own previous writings while also plagiarizing the works of others, including a Washington Post journalist and the author of a book on traumatic brain injury in children and adolescents.

Paul McCrory, a prominent researcher whose work on concussions has shaped much of the sporting world’s current policies on diagnosing and treating head injuries, resigned March 5 from his role as chair of the Concussion in Sport Group following allegations of plagiarism. His resignation comes after independent investigations found at least three suspected examples of plagiarism stretching back to McCrory’s time as the editor-in-chief of the British Journal of Sports Medicine 17 years ago.

As reported by The Daily Mail, a Concussion in Sport Group (CISG) representative confirmed that “the board accepted the voluntary resignation of Prof Paul McCrory,” adding that “with immediate effect, Prof McCrory has also resigned from the scientific committee of the 6th International Conference on Concussion in Sport to be held in Amsterdam.”

The CISG’s members meet every four years to produce a document called the Consensus Statements on Concussion in Sport. McCrory has been the lead author on four of the last five statements, including the most recent iteration, published in 2017. Among its recommendations, CISG developed the Sport Concussion Assessment Tool used by groups such the National Football League (NFL), Australian Football League (AFL), and the Football Association to evaluate head injuries in athletes.

CISG has long struggled to justify its impartiality given that it receives funding from groups such as the International Olympic Committee, FIFA, and World Rugby, according to The Guardian. As chair, McCrory made controversial remarks downplaying the dangers of a condition called chronic traumatic encephalopathy (CTE) that results from repetitive head trauma. In a 2016 address at the University of Melbourne, McCrory called the NFL’s concussion crisis “all the carry-on and hoo-ha you get from the United States,” adding that the media frequently misrepresented the dangers of head injuries. Last year, the UK Department for Digital, Culture, Media and Sport expressed concern that UK Sport, which oversees Britain’s Olympic and Paralympic teams, used the work of CISG as “a satisfactory basis for concussion protocols.”

The plagiarism allegations began with an article first published in Physics World in 2000 by Sheffield Hallam University sports engineer Steve Haake. In the piece, Haake discussed the role of technology in the Olympics, focusing on what he called a conflict “between the laws of physics and the laws of sport.”

Several years later, in 2005, McCrory published an editorial in the British Journal of Sports Medicine (BJSM) that directly copied roughly half of Haake’s piece without attribution in a monthly column called Warm Up, according to a guest post Haake wrote for Retraction Watch. At the time, McCrory was the editor-in-chief of the journal. Among the lines copied word-for-word was Haake’s concluding sentence: “A century on from Baron de Coubertin’s original vision of the Olympics, the motto swifter, higher, stronger ultimately still depends on the skill of the athlete.”

Haake writes in Retraction Watch that he alerted the journal soon after discovering the suspected plagiarism but adds that it was only in 2021, when he contacted the journal yet again, that its editors took his complaint seriously. In the retraction notice for McCrory’s 2005 editorial, published late last month, the journal noted “significant overlap” between the two pieces and called the incident an “unlawful and indefensible breach of copyright.”

In an email sent to Haake and shared with Retraction Watch, McCrory called the mistake “an isolated and unfortunate incident,” but a subsequent search by Nick Brown—a “self-appointed data police cadet”—revealed at least two more pieces suspected of being plagiarized between 2005 and 2006. Brown reached out to the editor-in-chief of BJSM, Jonathan Drezner, who referred the complaint to the publisher’s ethics division for review, Retraction Watch reported on March 2. 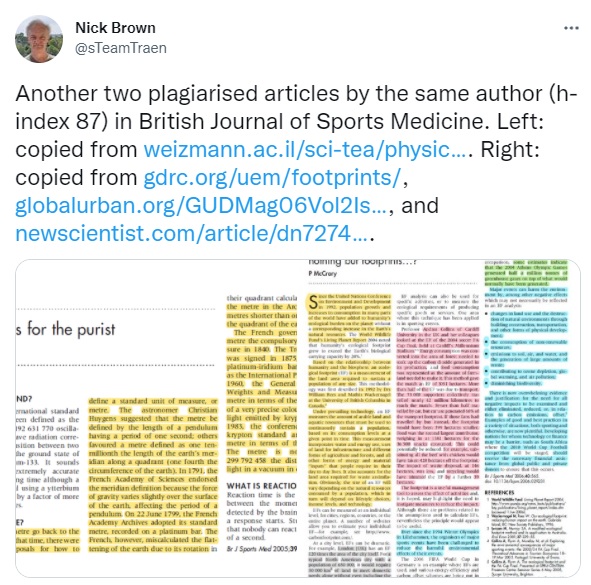 In further comments to Retraction Watch, McCrory attributed two of the three incidents to mistakes in the final draft submitted to the journal for publication, and said the third was the result of a typesetting error.

Despite the scandal, AFL chief executive Gillon McLachlan tells The Guardian that the league has yet to sever ties with McCrory. But aside from his role with the CISG, McCrory also holds a number of additional titles, including an honorary professorship at the Florey Institute of Neuroscience and Mental Health at the University of Melbourne, positions on editorial boards, and membership in several professional organizations.

“Plagiarism is the number one sin in academia,” Alan Pearce, a neuroscientist and concussion researcher, tells The Guardian. “And the BJSM is the leading publication for sport and exercise science, so if McCrory has lifted 50% of someone else’s article as alleged, without attribution or credit, the reputational damage of a retraction, both for he and the journal, could be massive.”