For years, scientists have predicted that 3-D printing—which has been used it to make toys, homes, scientific tools and even a plastic bunny that contained a DNA code for its own replication—could one day be harnessed to print live, human body parts to mitigate a shortage of donor organs. So far, researchers also used 3-D printing in medicine and dentistry to create dental implants, prosthetics, and models for surgeons to practice on before they make cuts on a patient. But many researchers have moved beyond printing with plastics and metals—printing with cells that then form living human tissues.

No one has printed fully functional, transplantable human organs just yet, but scientists are getting closer, making pieces of tissue that can be used to test drugs and designing methods to overcome the challenges of recreating the body’s complex biology.

The first 3-D printer was developed in the late 1980s. It could print small objects designed using computer-aided design (CAD) software. A design would be virtually sliced into layers only three-thousandths of a millimeter thick. Then, the printer would piece that design into the complete product.

There were two main strategies a printer might use to lay down the pattern: it could extrude a paste through a very fine tip, printing the design starting with the bottom layer and working upward with each layer being supported by the previous layers. Alternatively, it could start with a container filled with resin and use a pointed laser to solidify portions of that resin to create a solid object from the top down, which would be lifted and removed from the surrounding resin.

When it comes to printing cells and biomaterials to make replicas of body parts and organs, these same two strategies apply, but the ability to work with biological materials in this way has required input from cell biologists, engineers, developmental biologists, materials scientists, and others.

So far, scientists have printed mini organoids and microfluidics models of tissues, also known as organs on chips. Both have yielded practical and theoretical insights into the function of the human body. Some of these models are used by pharmaceutical companies to test drugs before moving on to animal studies and eventually clinical trials. One group, for example, printed cardiac cells on a chip and connected it to a bioreactor before using it to test the cardiac toxicity of a well-known cancer drug, doxorubicin. The team showed that the cells beating rate decreased dramatically after exposure to the drug.

However, scientists have yet to construct organs that truly replicate the myriad structural characteristics and functions of human tissues. “There are a number of companies who are attempting to do things like 3-D print ears,” and researchers have already reported transplanting 3-D printed ears onto children who had birth defects that left their ears underdeveloped, notes Robby Bowles, a bioengineer at the University of Utah. The ear transplants are, he says, “kind of the first proof of concept of 3-D printing for medicine.” 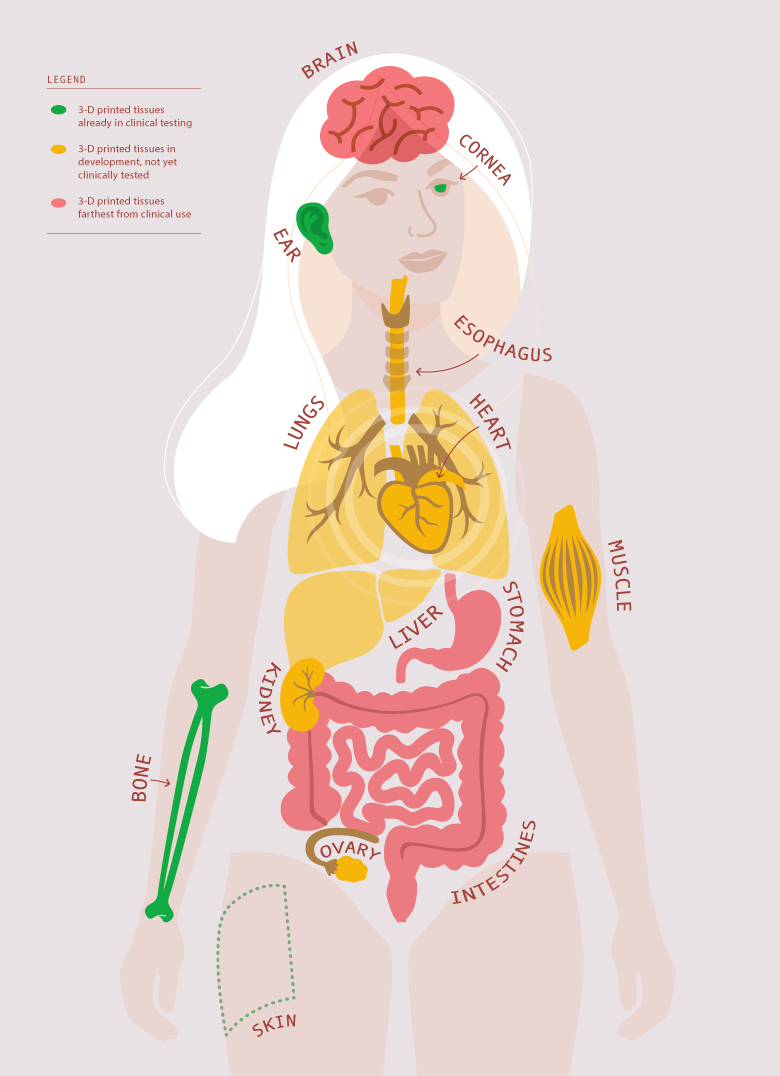 Researchers have been using 3D-printing techniques in hopes of developing tissues that can be transplanted into humans. Some printed tissues, such as skin and bone, are already being tested in humans, while many others are early in development.
See full caption
THE SCIENTIST STAFF

Bowles adds that researchers are still “a ways away” from printing more-complex tissues and organs that can be transplanted into living organisms. But, for many scientists, that’s precisely the goal. As of February 2020, more than 112,000 people in the US are waiting for an organ transplant, according to the United Network for Organ Sharing. About 20 of them die each day.

For many years, biological engineers have tried to build 3-D scaffolds that they could seed with stem cells that would eventually differentiate and grow into the shapes of organs, but “to a large extent those techniques don’t allow you to introduce kind of the organization of gradients and the patterning that is in the tissue,” says Bowles. “There is no control over where the cells go in that tissue.” By contrast, 3-D printing enables researchers with to very precisely direct the placement of cells—a feat that could lead to better control over organ development.

Ideally, 3-D printed organs would be built from cells that a patient’s immune system could recognize as its own, to avoid immune rejection and the need for patients to take immunosuppressive drugs. Such organs could potentially be built from patient-specific induced pluripotent stem cells, but one challenge is getting the cells to differentiate into the subtype of mature cell that’s needed to build a particular organ. “The difficulty is kind of coming together and producing complex patternings of cells and biomaterials together to produce different functions of the different tissues and organs,” says Bowles.

To imitate the patterns seen in vivo, scientists print cells into hydrogels or other environments with molecular signals and gradients designed to coax the cells into organizing themselves into lifelike organs. Scientists can use 3-D printing to build these hydrogels as well. With other techniques, “the patterns achieved have typically been two-dimensional,” Eben Alsberg, a bioengineer at the University of Illinois, tells The Scientist in an email. “Three-dimensional bioprinting permits much more control over signal presentation in 3D.”

So far, researchers have created patches of tissue that mimic portions of certain organs but haven’t managed to replicate the complexity or cell density of a full organ. But it’s possible that in some patients, even a patch would be an effective treatment. At the end of 2016, a company called Organovo announced the start of a program to develop 3-D printed liver tissue for human transplants after a study showed that transplanted patches of 3-D printed liver cells successfully engrafted in a mouse model of a genetic liver disease and boosted several biomarkers that suggested an improvement in liver function.

Only in the past few years have researchers started to make headway with one of the biggest challenges in printing 3-D organs: creating vasculature. After the patches were engrafted into the mouse’s liver in the Organovo study, blood was delivered to it by the surrounding liver tissue, but an entire organ would need to come prepared for blood flow.

“For any cells to stay alive, [the organ] needs that blood supply, so it can’t just be this huge chunk of tissue,” says Courtney Gegg, a senior director of tissue engineering at Prellis Biologics, which makes and sells scaffolds to support 3-D printed tissue. “That’s been recognized as one of the key issues.”

Mark Skylar-Scott, a bioengineer at the Wyss Institute, says that the problem has “held back tissue engineering for decades.” But in 2018, Sébastian Uzel, Skylar-Scott, and a team at the Wyss Institute managed to 3-D print a tiny, beating heart ventricle complete with blood vessels. A few days after printing the tissue, Uzel says he came into the lab to find a piece of twitching tissue, which was both “very terrifying and exciting.”

For any cells to stay alive, [the organ] needs that blood supply, so it can’t just be this huge chunk of tissue.

Instead of printing the veins in layers, the team used embedded printing—a technique in which, instead of building from the bottom of a slide upwards, material is extruded directly into a bath, or matrix. This strategy, which allows the researchers to print “free form in 3-D,” says Skylar-Scott, rather having to print each layer one on top of the other to support the structure, is a more efficient way to print a vascular tree. The matrix in this case was the cellular material that made up the heart ventricle. A gelatin-like ink pushed these cells gently out of the way to create a network of channels. Once printing was finished, the combination was warmed up. This heat caused the cellular matrix to solidify, but the gelatin to liquify so it could then be rinsed out, leaving space for blood to flow through.

But that doesn’t mean the problem is completely solved. The Wyss Institute team’s ventricle had blood vessels, but not nearly as many as a full-sized heart. Gegg points out that to truly imitate human biology, “an individual cell will have to be within 200 microns of your nearest blood supply. . . . Everything has to be very, very close.” That’s far more intricate than what researchers have printed so far.

Due to hurdles with adding vasculature and many other challenges that still face 3-D–printed tissues, laboratory-built organs won’t be available for transplant anytime soon. In the meantime, 3-D printing portions of tissue is helping accelerate both basic and clinical research about the human body.