After SARS-CoV-2 was found to be spreading in the US early in 2020, local governments issued shelter-in-place orders to try to combat the virus. Around Santa Cruz, California, this resulted in a 50 percent reduction in local travel, according to a paper published June 23 in Current Biology. Local mountain lions, which typically steer clear of human-populated areas, took notice, expanding their ranges closer to urban areas, the study found.

The Scientist spoke with study author Chris Wilmers, a wildlife ecologist at the University of California, Santa Cruz, about this work, and what the findings suggest about how ecosystem dynamics can shift in the face of widespread changes in human behavior.

The Scientist: It looks like you were already tracking several mountain lions with GPS collars when the pandemic hit. When the Santa Cruz area went into lockdown in mid-March 2020, did you immediately think that these animals might change their behavior?

Chris Wilmers: Immediately? Probably not. But a few days after the lockdown, I started venturing out into town occasionally to buy groceries or whatever, and noticed that there was a real dramatic decline in traffic on the roads—you drive around the city or walk around the city, it’s sort of become a ghost town. So, based on what we knew about mountain lions and how strongly they react to the presence of people on the landscape, we thought it might have an influence.

TS: How did you go about assessing changes in human mobility and in the mountain lions ranges’ during and following the lockdown?

CW: For the mobility part of it, we used data provided by Apple on vehicle and pedestrian trips. Most people have their phones with them when they go out, [and] Apple tends to know whether you’re in a car or whether you’re not, and so they can measure the number of vehicle trips and the number of pedestrian trips. Apple provides us data on a county-by-county basis. And so looking at that data, we can tell that there’s this pretty dramatic decline in mobility, by over 50 percent at the height of the lockdown. Then, for this time period, we also had these six . . . mountain lions that had GPS collars on them, and so we could see where they’re going, and we could [analyze] how these animals select habitat, and how that’s influenced by human mobility on the landscape.

TS: Just briefly, what did you find?

CW: Mountain lions are fearful of people, and we’ve known that for a while, because we’ve done experiments where we’ve played the sound of human voices in the forest and [at] their kill sites and compared them to controls, and we’ve always seen that mountain lions, when they hear human voices, they run away or they make themselves scarce in one way or another. And that translates to them generally avoiding developed environments on the landscape.

We often, in our statistical models, represent the human environment with the location of roads and houses, and when we do that, we see that mountain lions tend to avoid places with houses. But then there’s an extra fear they have of urban areas. Because if you think of urban areas, they’re different from . . . areas where people might live in the mountains. Urban areas also have stores and buses, way more vehicle traffic, and sidewalks with pedestrians. Urban areas have this extra level of noise and human activity that adjoining areas outside urban areas don’t. So mountain lions have this fear of people’s houses and then this additional fear of the urban area under normal circumstances. And what we found was that, during the lockdown, mountain lions’ fear of the urban area relaxed, or basically disappeared. It’s not like all of a sudden they love urban areas, because urban areas still have a lot of houses, but they were more willing to go into urban areas or hang out near urban areas than they had been previously.

TS: Was there anything about the findings that surprised you?

CW: I’m always a bit surprised that we find something, but based on my understanding of how mountain lions behave around humans, it all makes sense. I guess another surprising aspect is the speed at which we saw an effect. These changes happened within days to weeks. And so that’s really interesting, that you can influence these animals’ behavior on such a rapid timescale.

TS: When the lockdown lifted, did you immediately see that behavior revert?

CW: It’s hard to say immediately, but yeah, after the lockdown, they went back to behaving the way they did before the lockdown, within days to weeks. 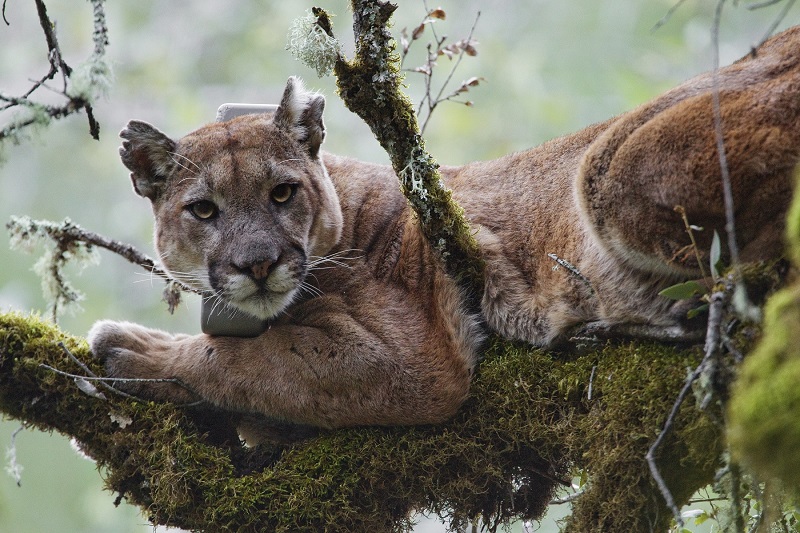 TS: What lessons can we take from this study going forward in a post-pandemic world?

CW: I think the first lesson is that it really shows us how important human mobility is in driving wildlife behavior and presence on the landscape. I think this is something that hasn’t been appreciated before. For a long time, it was known that humans can have big impacts on ecosystems, through land use changes or direct killing of animals or introducing poisons into the environment. But this study suggests that human mobility, independent of all these other ways that humans impact the ecosystems, can be important. And human mobility is something that over the last few centuries has just continued to increase. First, we got the steam engine, and then we got the automobile, and now we have ride sharing apps and electric bikes. And these things all increase the mobility of humans across the landscape.

Not only do these pandemics influence human health, but they could have fairly dramatic impacts on ecosystems.

The second insight is that we’re generally used to thinking of humans as the top dog in ecosystems, and the kinds of impacts humans have influence other species and then might ripple beyond to influence the species those species influence—these are the cascading effects that have been called trophic cascades by ecologists, generally. And humans have always been assumed to be at the top of these cascades. But what this study shows is that a pandemic can relegate humans to subordinate status in these cascades. So now instead of humans being on top, we’ve got the virus that’s on top, changing human behavior, which then influences mountain lions and has the potential to continue to cascade through the food web. . . . Not only do these pandemics influence human health, but they could have fairly dramatic impacts on ecosystems.