Recombination—the exchange of genetic material between genomes—is common in coronaviruses because of the way they copy their RNA genomes. During replication, the RNA-synthesizing enzyme these viruses use duplicates shorter sections close to the end of the genome in addition to making the long template it needs for generating whole-genome copies. Furthermore, the enzyme is prone to switching from one template to another, so if a cell has multiple viral genomes in it, the enzyme may stitch together bits from different viruses to create a kind of Frankenstein genome.

RNA viruses can leverage recombination to fix deleterious mutations or acquire new characteristics, which is why virologists say it’s important to keep tabs on any recombination events that may be occurring in SARS-CoV-2. While it’s not yet clear exactly what role recombination is playing in the virus’s evolution, researchers are continuing to monitor and investigate it in an effort to better understand its biology—and, perhaps, develop novel strategies for fighting it.

Recombination from the beginning

Early on in the pandemic, research suggested recombination likely played a pivotal role in SARS-CoV-2’s emergence as a human pathogen. In a study published in July 2020, for instance, Bette Korber, a researcher at Los Alamos National Laboratory, and colleagues reported that a portion of the receptor binding domain of SARS-CoV-2’s spike protein—the part of the spike that directly interacts with the ACE2 receptor that the virus uses to gain entry into cells—came from recombination with pangolin coronaviruses.

It’s no surprise, then, that the virus continued to recombine after it began infecting people. “It should be happening because it’s a very important evolutionary mechanism for these viruses,” explains Korber. At the same time, she adds, “quantifying how much it’s there can be tricky because . . . it’s computationally not easy to look at vast data sets,” and the search can be confounded by genetic changes that can come about in the lab.

Recombination happens in many viruses, including influenza, HIV, and other coronaviruses. It “could, in principle, be a meaningless event where two viruses swap some pieces of RNA, but they don’t really change themselves,” says Penn State biologist Maciej Boni. But researchers want to keep an eye on recombination in SARS-CoV-2 because it’s one way the virus could evolve to be more virulent or to infect more people—potentially faster than mutating one nucleotide at a time. 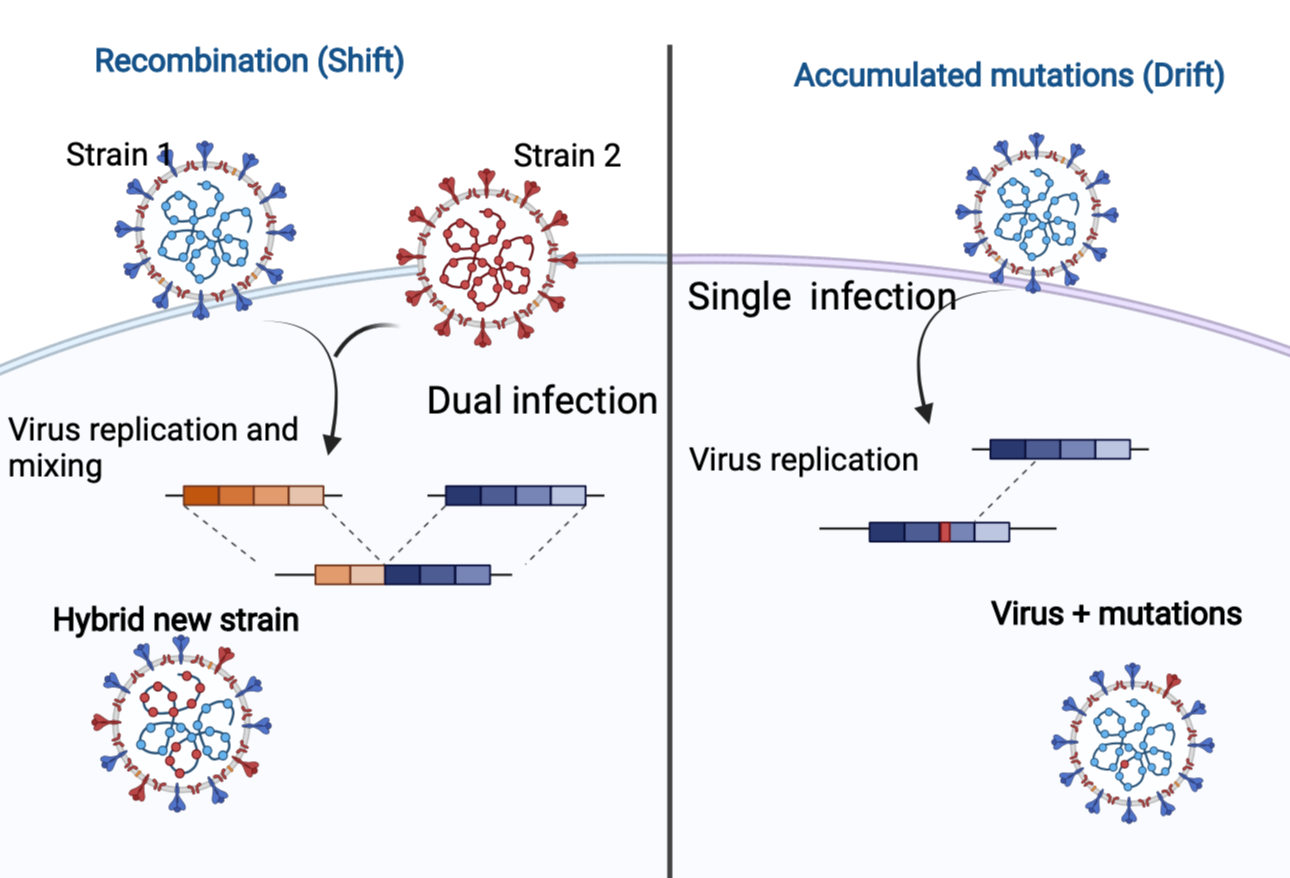 Recombination can bring together mutations that occurred in different lineages of a virus, potentially creating a more pathogenic strain.
Created by Lara Herrero Using BioRender, Reprinted with Permission from The Conversation

Most efforts thus far have focused on surveillance: figuring out whether or not recombination is happening in as close to real time as possible, and exploring what recombination may mean for viral evolution. It’s still early days for this work, because identifying recombination events can also be challenging if circulating genomes don’t look very different from one another. The computational methods used to identify recombinant events rely on comparisons of different sections of genetic material. The bigger the differences between one strain and another, the easier recombination is for algorithms to pick out. But “in the first months of the SARS-CoV-2 outbreak, most of the viruses were quite similar to each other,” Boni tells The Scientist. “Even by summer 2020, there wasn’t enough diversity to say anything meaningful about whether the viruses were swapping genes.”

Most researchers assumed that SARS-CoV-2 viruses were mixing and matching bits of their genomes because recombination is common in coronaviruses. It wasn’t until about a year into the pandemic that there was enough variation to confirm that hypothesis, says Ben Jackson, a postdoc in Andrew Rambaut’s group at the University of Edinburgh.

Jackson, Rambaut, Boni, and others collaborated on a paper that came out as a Cell pre-proof on August 17, which tracked recombination events in the UK throughout winter of late 2020 and early 2021. This time period in the UK had conditions that made recombination both likely and detectable: high SARS-CoV-2 prevalence overall and several genetically distinct variants infecting people in the same areas.

The authors analyzed viral sequencing data and, out of about 279,000 SARS-CoV-2 genomes collected, 16 showed evidence of recombination—mostly between the B.1.1.7 (Alpha) and B.1.177 variants—based on the mosaicism of their genomes.

Work is also underway to detect recombination on a larger scale and in real time. In a preprint released on bioRxiv on August 5, Russell Corbett-Detig, who focuses on genomic epidemiology at the University of California, Santa Cruz, and colleagues describe a new phylogenetic tool, Recombination Inference using Phylogenetic PLacEmentS (RIPPLES).

Using RIPPLES, the researchers identified 606 recombination events among a continuously updated phylogenetic tree with 1.6 million SARS-CoV-2 genome entries. “Approximately 2.7% of sequenced SARS-CoV-2 genomes have recombinant ancestry,” Corbett-Detig and colleagues write in the preprint. They also determined that recombination appears to be concentrated in the region of the Spike protein.

“If we can use all of the viral genetic diversity that we have in a given area, you have quite a lot more information to work with than if you have to subsample very few sequences to look for recombination,” says Corbett-Detig. “The idea is that, in any rapidly evolving pathogen situation, even if it’s not a pandemic, the ability to use all the information you’ve already gathered and then add on top of that to extend your analysis is going to be a really important design feature of how we study and track these things in the future,” he tells The Scientist.

What’s a bigger risk: another Delta appearing [through mutation], or a recombinant virus appearing that’s got two brand new phenotypes that make it more transmissible and more dangerous? I don’t think we know that.

From these scientists’ work, as well as that of other groups, it’s now clear that recombination has played a role in both the emergence and ongoing evolution of SARS-CoV-2. What the effects are of this recombination on viral spread and immune evasion, and thus public health, remains an open question. One big concern is that recombination might generate a “super variant” that’s markedly more infectious or more deadly than previous versions—or both. “When you have multiple lineages circulating, the danger is that the viruses could combine one dangerous phenotype with another dangerous phenotype into a single virus that has two dangerous phenotypes,” says Boni.

But while Korber says recombination is “definitely happening,” she says it likely hasn’t produced a unique threat to public health. In the UK study, for instance, of the 16 putative recombinants, only one group of three closely related sequences appeared to have circulated within the community, and their reach was limited. Korber’s group has similarly seen only low levels of community transmission after a recombination event. In Texas, for instance, she and her team were able to find recombination events between the Kappa and Delta variants that were both circulating in the state, “but they didn’t go very far. They were in a small cluster of people.”

Korber is quick to point out that these data don’t mean recombination can’t or won’t generate a bigger, badder virus. The real question, says Boni, is how likely that actually is.  “What’s a bigger risk: another Delta appearing [through mutation], or a recombinant virus appearing that’s got two brand new phenotypes that make it more transmissible and more dangerous? I don’t think we know that,” he says. “We don’t know ahead of time what mutations and what phenotypes will appear.”

“Right now, the effect of recombination within human populations has probably been relatively small relative to the emergence of new mutations,” says Corbett-Betig. But “it’s reasonable to suppose that as there are more and more genetically divergent strains, recombination will make new combinations that might be important.”

Daniel Jacobson, a systems biologist at Oak Ridge National Laboratory, disagrees that the effect of recombination has thus far been minor. In a preprint posted on bioRxiv on August 8, he and colleagues propose that recombination has already driven the emergence of new SARS-CoV-2 variants.

The researchers analyzed more than 900,000 viral genomes with a computational method that assesses evidence for recombination and integrates that information with predictions of protein structure. They found that the combined impact of multiple mutations from different parts of the genome on a phenotype appeared to be synergistic, meaning that de novo mutations that have been associated with new variants of SARS-CoV-2 are likely not the whole story.

“We often see mutations in the Spike protein of SARS-CoV-2 that people are using to define the variants of concern actually occur months or even a year before [the variants] expand rapidly in the human population,” Jacobson writes in an email to The Scientist. These spike protein changes alone do not appear to be sufficient for the variant to spread rapidly; rather, that only seems to happen when mutations elsewhere in the genome also occur, which, combined with the spike mutations, give that variant a selective advantage, he says.

In the preprint, Jacobson and the other authors attribute the accrual of variant-defining mutations to recombination, claiming it’s the simplest explanation for the emergence of some variants. They calculate, for instance, that the chances of the 13 seemingly important mutations present in the Alpha variant accumulating serially given the observed mutation rate is 1 in a quadrillion, and they didn’t find evidence for a precipitous increase in mutation rate before it arose. Instead, they note that many of these consequential mutations were circulating in other sequences months before B.1.1.7 took off, which they interpret as evidence that recombination events more likely played a role in the variant’s emergence.

In an email to The Scientist, Corbett-Detig acknowledges that he hasn’t looked at the preprint in depth, but that other scenarios may explain the emergence of the variants of concern. The mutation profiles seen in SARS-CoV-2, he adds, “are likely to result from recurrent mutation and strong natural selection that produces more transmissible viruses.”

From monitoring to therapeutics

Regardless of the effects that recombination has had on viral evolution thus far, experts agree that it’s important to monitor SARS-CoV-2 genomes for evidence of recombination—both to understand the virus better, and to get early warning if a recombinant “super variant” were to emerge.

Another reason to monitor recombination and study it further is that researchers could potentially target the molecules involved in the process to incapacitate the virus. Like other coronaviruses, SARS-CoV-2 appears to leverage frequent recombination events to evolve, and potentially to fix deleterious mutations that can arise as it replicates in a host.

Some researchers have pointed out that, if the virus were prevented from recombining, mutations might accumulate to the point that it becomes hampered or even unable to replicate and spread.

Some researchers have pointed out that, if the virus were prevented from recombining, mutations might accumulate to the point that it becomes hampered or even unable to replicate and spread. That could mean that drugs that interfere with recombination specifically could help end the pandemic.

A January study in PLOS Pathogens suggests one possible target for such drugs: an enzyme called ExoN that helps proofread viral RNA. Previous studies had implicated it in the virulence of coronaviruses, likely because it checks genome copies for mutations that might be deleterious, but the January paper indicated it’s also important for recombination. When the team removed it from a cultured murine coronavirus, significantly less recombination was observed.

Further study of recombination in coronaviruses and SARS-CoV-2 in particular could reveal additional drug targets. If nothing else, monitoring for recombination by sequencing viruses from positive cases will ensure researchers keep an eye on how this deadly virus is changing and how quickly. Most researchers aren’t saying, “‘Ah, recombination is happening. This is the worst thing in the world,’” says Jackson. “I think that everyone knew that it was going to, and it’s not clear to me that it’s going to make [the pandemic] any worse than what’s happening anyway.”