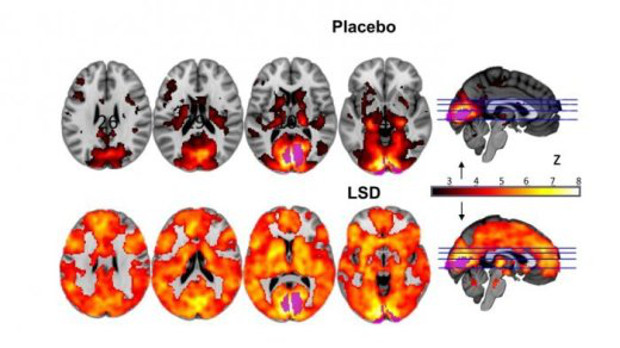 IMPERIAL COLLEGE LONDONTwo papers—one published in PNAS on Monday (April 11) and another in Current Biology today (April 13)—report how brain activity is altered in people given doses of lysergic acid diethylamide (LSD). Using two different brain imaging approaches, the authors of both studies detailed the particular changes in activity that associate with arguably the best-known effects of LSD: visual hallucinations and an increased sense of unity with one’s surroundings—referred to in the Current Biology paper as “ego dissolution.”

“This work is very important with regards to the insights it gives us on how hallucinogens, specifically LSD, affect the brain,” said psychiatrist and behavioral scientist Charles Grob of the University of California, Los Angeles, who was not involved in either study. “Now we have a better understanding of the neurobiological substrate for the psychedelic experience.”

Research into psychedelic drugs, such as LSD and psilocybin—the hallucinogenic component in magic mushrooms—took...

Previous studies have suggested that compounds like LSD, in combination with psychotherapy, could be effective treatments for alcoholism, anxiety, and tobacco addiction, among other things.

Aside from their potential clinical use, the drugs also offer insight into the nature of consciousness itself, said cognitive and computational neuroscientist Anil Seth of the University of Sussex, U.K., who also did not participate in the work. “One of the main ways to try to understand the neural basis of consciousness is to try to induce different kinds of experience and see what happens in the brain,” he said, and “LSD is a very potent way of manipulating somebody’s experience of the world and of themselves.”

To examine LSD’s effects, Imperial College London’s David Nutt and Robin Carhart-Harris together with their colleagues recruited 20 healthy volunteers, all of whom had reported taking a psychedelic drug at least once before. The subjects were given injections of 75 micrograms of LSD—“equivalent to about one blotter of LSD taken orally and recreationally,” said Carhart-Harris—and then their brains were analyzed by functional magnetic resonance imaging (fMRI) and magnetoencephalographies (MEG). In addition, the volunteers were asked to rate various aspects of their experiences and to answer an Altered States of Consciousness questionnaire. As a control, the subjects’ brains were analyzed a couple of weeks before or after the LSD analyses, at which point they were given a saline placebo injection.

Connecting the participants’ ratings and questionnaire answers to the imaging data, the team found that LSD-induced visual hallucinations correlated with an increase in cerebral blood flow to the visual cortex, a pronounced increase in connectivity between the visual cortex and other brain regions, and a decrease in the power of visual cortex alpha waves, which are thought to generally inhibit neural activity. The authors suggested that this reduced alpha power may allow uninhibited visual cortex activity, which—together with the increased connectivity between normally unrelated brain regions—could help explain the subjects’ ability to visualize unusual images even with their eyes closed.

Aside from the increased connections with the visual cortex, LSD induced a global increase in connectivity across the brain, which was correlated with the participants’ sense of ego dissolution. In contrast, connections within specific systems, such as the default mode network, appeared to reduce.

“If you look at connectivity within [known] systems, what you see with both psilocybin and LSD is a weakening of connections,” said Carhart-Harris. “But when you look at the relationships between the different systems . . . they relate to each other much more.” Overall, the result appears to be a “unified, more integrated brain,” he said.

Understanding the neurobiological basis of ego dissolution is particularly interesting, because “this break down of self-referential processing may be the driver of clinical change,” said cognitive neuroscientist Fred Barrett of the Johns Hopkins School of Medicine in Baltimore who was not involved in the work. Put another way, it is this ego-dissolving, mind-expanding aspect of the psychedelic experience that seems to be associated with the drugs’ treatment successes.

It’s possible that psychedelic drugs offer a “re-equilibration of connectivity,” said Grob. “Patterns of a [psychiatric] disorder are often entrenched,” he added, “and there maybe some value in loosening things up.”