Scientists seek to combine genome editing with a technique used in chicken breeding to try to bring back lost birds.

W. has returned to freelance journalism after a long hiatus as an IT consultant and process engineer. Way back when, his master’s research in International Studies from the University of...

Questions about the lives of extinct birds now perched in natural history museums have persisted long after their passing: What did they sound like? What did they look like in flight? What ecological niche did they inhabit?

While efforts are underway to bring back extinct mammals, such as the woolly mammoth and quagga, through cloning, artificial insemination, and a breeding process that aims to revert domesticated species to phenotypes that closely resemble their wild ancestors, birds’ reproductive systems are not as amenable to these techniques.

So scientists are turning to cultured germ cell transmission, a promising technique that has been used to propagate gene-edited domesticated chickens for more than a decade. The idea is that genes from extinct birds could be replicated and introduced into host embryos’ germlines.

We’re starting from a place where there is at least a viable technology, and then we’re stepping out biologically.

While the technique works well in chickens, current cell culture media do not support wild bird primordial germ cells (PGCs), the precursors to sperm and egg. PGCs ferry genetic sequences into a host so they can be passed down through generations. Revive & Restore, an organization weaving biotechnologies into wildlife conservation and backing much of the research into de-extinction, has made it a priority to develop such media. It would enable the large-scale amplification of wild bird PGCs, perhaps including those of endangered birds, and offer a platform for gene modification that could help return extinct species to life.

“Culturing is tough,” says Marie-Cecile Van de Lavoir, the vice president of operations at Ligand Pharmaceuticals, who, in a 2006 study, advanced the technique in chickens by developing the first cultures of modified PGCs that did not differentiate away from their phenotype and stayed dedicated to germline transmission. She has several related patents in the field, and provided initial feasibility studies to Revive & Restore for its avian de-extinction effort. “So far I have not seen a culture system in any other species” besides chickens that shows the desired efficacy, she says. “Every bird species has a different kind of culture requirement. And we don’t quite yet know what those requirements are.”

Rosemary Walzem, a nutritional biochemist at Texas A&M University, along with a small team of students and postdoctoral researchers, is trying to fix that.

“We’re starting from a place where there is at least a viable technology, and then we’re stepping out biologically” to a relative of the chicken, the pinnated grouse (Tympanuchus cupido pinnatus), says Walzem. And once the cultured germ cell technique is stabilized in the pinnated grouse, the strategy would then be extended to a closely related, extinct subspecies of the grouse.

Inhabiting the East Coast scrublands and sandplains of North America, the heath hen (T. cupido cupido) was a large grouse and a food staple until the mid-nineteenth century. So common was the bird that naturalist Thomas Nuttall reported in 1832 that “servants stipulated with their employers not to have heath hen brought to the table oftener than a few times a week.”

Overhunting, disease, and other pressures led to a precipitous decline in heath hen numbers. By 1870, only remnant populations remained on coastal islands, including at the heath hen’s last stand on Martha’s Vineyard, where the bird became somewhat of a cause célèbre. Marking an early attempt at conservation, the Heath Hen Reserve was established in 1908; here bird enthusiasts gathered near mating habitats called leks, or booming grounds, to witness the extravagant courtship dances of males. The birds would stamp their feet, extend two hornlike feathers just above large, colorful air sacs on their necks, and send forth a cascade of booming sounds. The last heath hen, known to locals as Booming Ben, was seen in 1932.

A mutual interest in modifying bird genomes landed Walzem a grant from Revive & Restore to work toward de-extinction for the species. The first step in Walzem’s attempt to bring back the heath hen was establishing a breeding population of pinnated grouse at Texas A&M. The pinnated grouse has much the same morphology as its smaller, extinct cousin, and though it’s disappeared from much of its pre-Columbian range, it can still be found in 10 states. After a successful transfer from a breeder to their new enclosure at Texas A&M, a flock of eight birds produced 66 eggs during the last mating season in 2020.

The next step to “propel the project forward, is to get conditions where we can grow primordial germ cells in culture, reliably,” says Walzem. Toward that end, PGCs are extracted from pinnated grouse donor embryos and cultured in vitro where they can be replicated. In this state, the PGCs are readily accessible for manipulation, including genome editing that might in the future introduce genetic sequences copied from extinct species. Next, the cells are injected into a developing surrogate chicken embryo, where they migrate to the sex organs. When the surrogate hatches and eventually reproduces, the sperm and egg of its offspring harbor the genome of the donor grouse embryo, along with any genetic edits introduced by scientists. 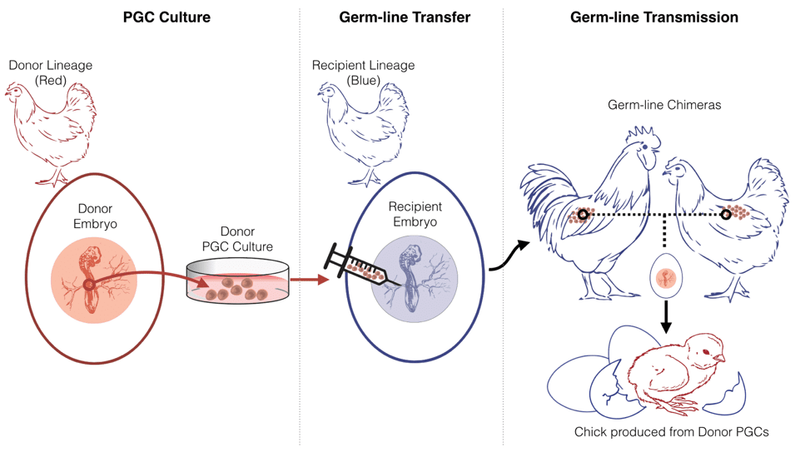 In the cultured germ cell transmission technique, PGCs are extracted from a donor and cultured in a medium where they may also be gene edited. The PGCs are then injected into recipient embryos that grow into germline chimeras. When the chimeras reproduce, the donor genomes are passed down to the offspring.
Revive & Restore

Walzem’s initial attempts at propagating and expanding pinnated grouse PGCs harvested from embryos were not successful in two different types of media.

“There could be hundreds of molecules that need to be involved in programming a cell,” Walzem explains. To understand the nutritional requirements of PGCs and to develop the best recipe for supporting them in vitro, Walzem is casting a wide net to experiment with available media conditions. She is planning on employing analytical platforms such as metabolomics and cytokine arrays to understand why germ cells thrive and amplify in some media batches and not others.

By tracking signaling molecules called cytokines, Walzem will look for indications of the developmental stages of the cells in media to nail down at what point they continue to develop or stall out. Together with the metabolite profile, cytokines could further pinpoint the required ingredients for the optimal PGC medium. Or, conversely, what her team might discover is what stops germ cells from thriving in the media in the first place. “And that may be the biggest step forward,” to identify and remove any impediments, says Walzem.

Should the Texas A&M team succeed in culturing pinnated grouse germ cells, the next step in germline transmission is to inject these cells into the bloodstream of a host chicken embryo during a precise time window that would enable the cells to home in on and occupy the embryo’s gonads, then develop normally as sperm or eggs.

But the host chicken embryo also has its own germ cells, “and basically there’s a dog fight between who owns” reproduction, says Walzem. “And you have to imagine that the recipient’s own PGCs have a home court advantage.”

For that reason, the success rate of germline transmission in chickens is only 5–8 percent, says Eszter Patakiné Várkonyi in an email to The Scientist. As a senior fellow at the National Centre for Biodiversity and Gene Conservation, Institute for Farm Animal Gene Conservation, in Hungary, she has focused her work on preserving rare chicken breeds, which are popular on small farms in Hungary and are more resistant to disease and parasites than birds in industrial poultry farming. To boost the primordial germ cell transmission rate, Várkonyi suggests using chemically sterilized chicken embryos: Without competing native germ cells, germline transmission success rockets to as high as 99.5 percent. Using sterilized chicken embryos to host pinnated grouse germ cells is a tactic Walzem is considering.

Should this cultured germ cell transmission maneuver prove successful, and the surrogate chicken reproduces with another chicken also bearing the grouse germline, its offspring will be pinnated grouse.

Walzem plans to continue collaborating with her colleagues in the field to further identify the differences between the heath hen and pinnated grouse genomes, a process already advanced by Revive & Restore through its funding of the genome sequencing of the Tympanuchus grouse genus. When the genes specific to the heath hen are identified in sum, she is looking to the Texas A&M Institute for Genomic Medicine to join the effort and edit the corresponding genes in the pinnated grouse germ cells to confer heath hen attributes.

If what ultimately hatches in Walzem’s lab truly replicates the heath hen remains to be seen. Epigenetics and the environment will also play critical roles in its conditioning and survival. And to make any conservation effort stick, humans must be better stewards of the bird’s habitat. To this end, Revive & Restore intends to maintain flocks of chimeras and surrogate heath hens while reintroducing the species to the protected sandplains of Massachusetts islands for continued study. If the endeavor to de-extinct the heath hen makes it to that point, such a milestone could be 10 or more years away.