Thousands of animals have had their shot already. How many more really need it?

Chris Baraniuk is a freelance science journalist based in Northern Ireland who contributes to The Scientist.

For the cheetah, getting her vaccine was no big deal. When the wildlife care specialist at San Diego Zoo Safari Park called to her, she paced over and then sat, quiet and calm, to receive her injection.

“The animal participates in this process and can walk away at any time,” explains Nadine Lamberski, head of wildlife health at the San Diego Zoo Wildlife Alliance. It’s the close relationship between wildlife specialists at San Diego and the animals they look after, she adds, that makes this gentle approach to vaccination possible.

Roughly 260 animals, of many different species, have now received an experimental COVID-19 vaccine at San Diego Zoo and Safari Park. Most animals “volunteered” like the cheetahs, says Lamberski, though some were vaccinated from afar via darts.

While SARS-CoV-2 has caused illness and millions of deaths among humans, multiple nonhuman animal species have turned out to be susceptible to it, too. This has led to the development and use of veterinary vaccines, mainly in zoos—but the question of which species need to be immunized, now or in the future, remains an open one.

Zoos, which look after a relatively small number of often rare and high-value animals, clearly want to protect the species in their care. COVID-19 has caused a handful of animal deaths in zoos to date—including three snow leopards at a children’s zoo in Nebraska and two lions at a zoo in India.

Another concern, fueled by findings that the virus has entered some populations of wild animals, is that SARS-CoV-2 could mutate in other species and spread back to humans, prolonging the pandemic. Vaccination might prevent that and protect the animals themselves.

Vaccines for humans require expensive development programs and large scale trials, and are generally prioritized for vaccinating people. Animal vaccines commonly require a lower level of scrutiny, and often have a different makeup. There is precedent for jabs that can be used on multiple species, so some veterinary pharmaceutical companies have sought to develop a COVID-19 shot that can be used to vaccinate many different types of animal.

Among these firms is Zoetis. The US-based company is in the process of donating around 26,000 doses of its COVID-19 vaccine for animals to zoos and animal sanctuaries in 13 countries, including the US and Canada. Another COVID-19 vaccine intended for use in animals was developed in Russia, and there is a further, forthcoming vaccine made by Applied DNA Sciences and Evvivax. The two companies initially intended the vaccine to be used for cats but are now reported to be focused on inoculating mink instead.

Kevin Tyler, a microbiologist at the University of East Anglia, notes that the veterinary vaccine now in use in Russia is an inactivated virus vaccine, which is a more complex form of vaccine than recombinant or mRNA vaccines. This complexity means the risk of unexpected side effects is considered greater, so such vaccines would require especially rigorous testing before being considered for use in humans. However, he notes that inactivated virus vaccines conserve more proteins and, therefore, epitopes from the original virus and so are likely to give a broader spectrum of protection.

Zoetis started working on its vaccine in February 2020, around the time that reports emerged of a dog testing positive for COVID-19 in Hong Kong, and has since carried out an in-house study involving 15 cats and 15 dogs. The results, obtained before the first doses of the shot were distributed, reveal that the 20 animals that received the experimental vaccine developed a robust antibody response against SARS-CoV-2, while the 10 that received a placebo did not. There were no safety concerns reported by the company. It is the only study on the vaccine that has been made public so far.

Less than 12 months after development began, the company made its first donation of experimental vaccine doses to the San Diego Zoo, shortly after a troop of eight gorillas at the zoo’s safari park became infected.

The shot, a subunit recombinant vaccine, uses a synthetic version of the SARS-CoV-2 spike protein and a proprietary adjuvant that Zoetis has used in previous veterinary vaccines. It’s administered in two doses, three weeks apart, and, unlike with some drugs, the magnitude of dose does not need to be adjusted depending on the size or weight of the animal receiving a jab.

“It is the exact same quantity that we use for a 500-lb gorilla and a 5-lb mink,” says Mahesh Kumar, a microbiologist and senior vice president of Global Biologics Research at Zoetis who leads vaccine research and development at the firm.

The vaccine is stored at regular fridge temperatures and, once opened, must be used within 24 hours.

Since the first donated doses arrived at the San Diego Zoo, the vaccine has been used to inoculate more than 100 different species in a handful of zoos around the country, including the Oakland Zoo and the Philadelphia Zoo.

“It’s unprecedented that we have one vaccine with one adjuvant that has been used in over 100 species without significant issues,” says Kumar.

Lamberski says she and her team rolled out the vaccine slowly to make sure that their animals did not develop serious side effects. In light of the gorilla outbreak, the first to get the shot were the zoo’s bonobos, gorillas, and orangutans. The response from these animals was encouraging, so the team continued their vaccine drive, administering it to a wide variety of species, from mountain lions to otters.

“We did have a few animals that went off food for a day, maybe they seemed a little less active,” she recalls. A few others appeared to experience mild soreness.

In October, three vaccinated tigers at San Diego Zoo experienced breakthrough infections but soon recovered. “We’d like to credit the vaccine but we really don’t know for sure,” says Lamberski.

The Zoetis vaccine is still considered experimental, though the company is hoping to get it USDA-licensed for use in mink. These small mammals are farmed for their fur and fat (the latter is used to make oil for a variety of products), and are particularly susceptible to COVID-19—many thousands of farmed mink have died from the disease worldwide. There is also evidence of mink-to-human SARS-CoV-2 transmission. The vast majority of mink farms in the US have committed to vaccinating their animals, according to reports.

Which species to vaccinate?

With the availability of veterinary vaccines, the question of how many animals to vaccinate, and why, arises.

Zoos will make their own judgements. Émilie Couture, a veterinarian at Granby Zoo in Canada, hopes to receive her first batch of Zoetis vaccine doses after the Christmas holidays. Big cats and gorillas will be first in line for a shot. However, while the zoo will likely also vaccinate some of its Jamaican fruit bats that are part of an educational program, and therefore have greater human contact, most of the zoo’s bats will go un-jabbed. 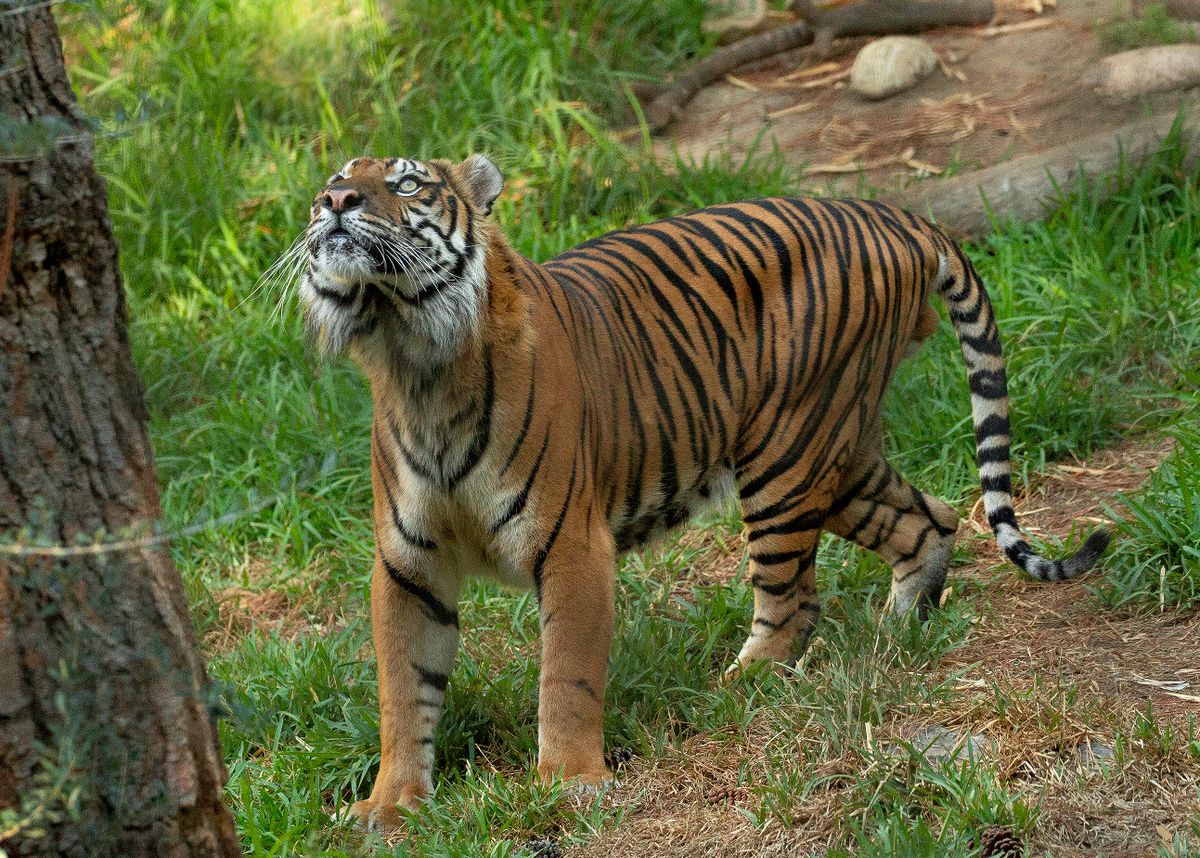 Tigers were one of the many species at the San Diego Zoo that received COVID-19 vaccines.
SAN DIEGO ZOO

The World Organisation for Animal Health (OIE) says there might be justification for vaccinating endangered species against COVID-19, but Keith Hamilton, head of the OIE’s preparedness and resilience department, says in a statement that pets don’t need a jab at this stage because there is little evidence of pet-to-human transmission, and therefore vaccinating the animals “would not contribute to controlling the pandemic.”

Nikolaus Osterreider, a veterinarian virologist at City University of Hong Kong, agrees. “Yes, there were mink-to-human transmissions, but the transmission in humans is not caused by animals right now.”

The problem is that this could change in the future.

“I worry about things like urban monkeys in populations where it could be spreading quite happily,” says Tyler. “It may be mutating quite a lot, and at some stage it could come back into the human population.” Urban monkeys sometimes interact with people at very close quarters, including in many large cities in Asia and South America.

The prospect of an animal species serving as a reservoir of SARS-CoV-2, enabling the virus to then cross back into the human population and prolong the pandemic, also worries Suresh Kuchipudi, a virologist at Pennsylvania State University. He and his team recently posted data on the prevalence of SARS-CoV-2 RNA among white-tailed deer in Iowa. The findings, yet to be peer-reviewed, show that more than 30 percent of samples obtained from 300 roadkill or hunted deer during the pandemic tested positive for SARS-CoV-2 RNA.

There is currently no evidence of SARS-CoV-2 transmission from white-tailed deer to humans, he adds, but he stresses that further research is needed to better understand the spread of the disease among deer and the potential risks to people. Vaccinating wild deer would be “very challenging,” says Kuchipudi, but it could be one option in the future.

If a program did take shape to vaccinate wild or semi-wild animals, such as urban monkeys, against COVID-19, it might rely on a yet-to-be-developed oral vaccine, suggests Tyler. Such a vaccine could be applied to a foodstuff favored by the target species and distributed in places where the animals were likely to consume it.

For Kuchipudi, the real risk is in missing potential populations of animals where SARS-CoV-2 is spreading, and potentially mutating. A testing program to monitor the prevalence of the virus in deer and other species could also be of benefit, he adds. Without, at the very least, confirming which animals are most at risk of catching the virus and potentially spreading it back to humans, we could be “blindsided” by future outbreaks.

“Unless we address that aspect also, it may not be feasible to bring this pandemic to an end,” he says.

Clarification (December 10): This story originally attributed remarks about whether pets should be vaccinated to a spokesperson for the OIE. At OIE’s request, the attribution has been changed to Keith Hamilton, head of the organization’s preparedness and resilience department.