Luke Jones spent the early evening of July 12 last year crouched in several inches of dusty ash in a secluded region of Montserrat’s tropical dry forest. After gently unzipping three nylon tents and laying their flaps flat to the ground, the program coordinator for Mountain Chicken Reintroduction and his team waited silently in a moonlit clearing for hordes of giant frogs to leap to freedom.

After 30 minutes of waiting, it became clear that the frogs, commonly known as mountain chickens (Leptodactylus fallax), were not going to emerge in the triumphant cavalry the researchers had anticipated. It had been 10 years since the amphibians’ ancestors had lived on the Caribbean island; the frogs in the tents were more accustomed to small biosecure homes in Jersey and London Zoos in the UK than to the 25-square-meter, semi-wild enclosure waiting for them outside....

After 30 minutes of waiting, it became clear that the frogs, commonly known as mountain chickens (Leptodactylus fallax), were not going to emerge in the triumphant cavalry the researchers had anticipated. It had been 10 years since the amphibians’ ancestors had lived on the Caribbean island; the frogs in the tents were more accustomed to small biosecure homes in Jersey and London Zoos in the UK than to the 25-square-meter, semi-wild enclosure waiting for them outside. When rustling the tents failed to encourage the frogs to hop into their new world, the researchers gently tipped the 14 animals onto the forest floor.

Any effort which takes that scary step into the wild . . .
is a huge step forward.

Although it wasn’t the striking entrance that the team had anticipated, what followed was spectacular, Jones says. As the frogs sat blending into their surroundings, a sudden deluge of warm rain welcomed the mountain chickens home. One frog started calling, and then the next. For the first time in years, the atmosphere rippled with the enchanting sounds of these amphibians, which, weighing up to a kilogram each, were once apex predators on the island.

This frog release—one of two such efforts Jones oversaw that summer—marked the beginning of an innovative reintroduction program that not only has implications for Montserrat’s mountain chickens but could inform the conservation of amphibians around the planet. By manipulating the frogs’ habitat within the semi-wild enclosure, Jones and his colleagues hope to support the population they’ve released and protect it from disease—and to learn more about amphibian biology and conservation methods along the way.

Montserrat hit the headlines in 1995, when the Soufrière Hills volcano began to erupt, wiping out two-thirds of the mountain chicken’s range on the island. Despite the severity of the disaster, the frogs survived and continued to thrive in the island’s northern regions—that is, until the deadly fungal disease chytridiomycosis arrived on Montserrat in 2009, probably via the accidental importation of infected tree frogs. The disease spread rapidly, decimating the island’s mountain chicken population within just one year—the fastest decline of any vertebrate ever recorded.

Ben Scheele, a population ecologist at the Australian National University who recently reported the latest figures on the disease, says that chytridiomycosis has contributed to the decline of at least 501 species worldwide. “This estimate is likely conservative as the disease has likely also affected undescribed or poorly known species,” he says. What’s more, chytridiomycosis is widely recognized as “the most important cause of species extinctions” in amphibians, says Andrew Cunningham, a veterinary pathologist at Zoological Society London (ZSL) who led the team that first identified the chytrid fungus, Batrachochytrium dendrobatidis.

See “A Race Against Extinction”

To date, researchers have been unable to stop the disease. The fungus kills amphibians by degrading the keratin in their skin, making it harder for them to absorb the oxygen and trace minerals they need for good health and, in turn, causing heart failure.

Back when the fungus first arrived on Montserrat, 50 disease-free mountain chickens were swiftly gathered up and bred in biosecure facilities at zoos in Europe. In the years that followed, Durrell Wildlife Conservation Trust—in collaboration with Montserrat’s Department of Environment,  ZSL, and various European partners—composed the reintroduction program that Jones, along with his supervisor Mike Hudson and the Department of Environment team, has been putting into action over the past year. 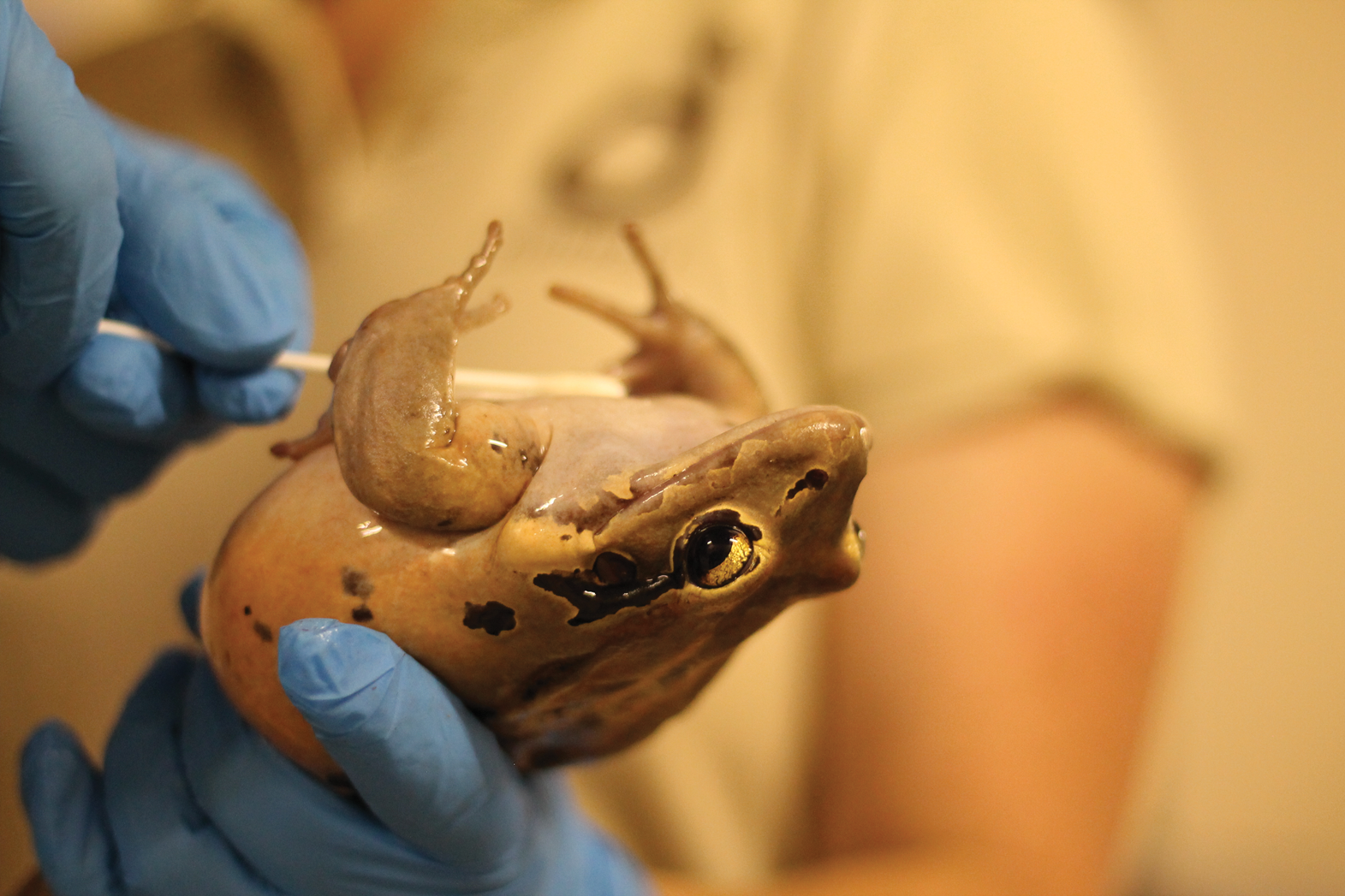 SKIN TEST:  Mountain chicken frogs are being monitored for signs of fungal disease on the Caribbean island of Montserrat.
JENNIFER PARKER

The frogs’ enclosure contains solar-heated ponds, areas in which tree canopy has been removed to allow the sun to heat the ground, and large rocks that the frogs can use as basking sites. Jones explains that the chytrid fungus struggles to survive at high temperatures; he and his colleagues hope that the abundance of warm areas will give the frogs an advantage over the fungus, and perhaps time to develop resilience to the disease.

One possible route to resilience could be behavioral adaptation: frogs that learn to make greater use of hot spaces might be able to keep their chytrid load low enough to avoid harm. But Jones and colleagues suspect that there might be other mechanisms—for example, changes to the epigenome or to the skin microbiome—that make the frog’s surface a less favorable environment for the fungus. On a longer time-scale, there’s the additional potential for genetic mutations that promote survival to spread throughout the frog population.

To monitor the project’s success, the frogs are subjected to a monthly health check: their sizes and weights are recorded, and the animals are examined for any signs of disease. The frogs are also swabbed, and samples are sent to ZSL’s laboratory in London to determine how the chytrid load of each individual changes over time. The team has yet to publish its results, but Jones says that the return of this charismatic species will offer a “beacon of hope” for the people of Montserrat, who have been struggling to recover from the volcanic eruptions that left the capital city buried in ash some 25 years ago.

Cunningham adds that simultaneous work being carried out by other researchers with genetic material from a handful of mountain chickens that survived for years with the fungus in Dominica—the only other island where the frog species is found—could aid conservation plans by identifying DNA sequences that confer resistance to the disease. “That could inform selective breeding or selective releasing on Montserrat,” he says.

The work could also help researchers protect amphibians more broadly. “The experimental management implemented in Montserrat is very innovative and exciting,” Scheele says. “Hopefully it is successful and the approach can be used to help the conservation of other species.” But he cautions that “there are no silver bullet approaches. . . . We need to try a range of different things and it’s likely that different actions will work for some species, but not be so effective for others.”

Jonathan Kolby, director of the Honduras Amphibian Research and Conservation Center, says that the Montserrat project represents an important step in researchers’ fight against chytridiomycosis. “Any effort which takes that scary step into the wild . . . and does any kind of experimental effort to see how we can have these animals coexist with chytrid is a huge step forward.”