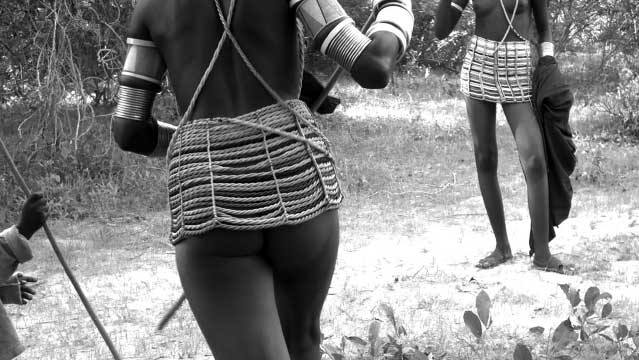 I SEE LONDON, I SEE FRANCE: Barabaig women dance for a wildlife camera in their beaded undergarments.COURTESY OF RUAHA CARNIVORE PROJECT

For more than a year starting in 2009, Amy Dickman had been trying to forge a relationship with members of a tribe in central Tanzania called the Barabaig. The University of Oxford zoologist was studying the killing of lions in the region, and wanted to learn more about clashes between carnivores and humans. “They said they weren’t killing them,” Dickman says. But the data suggested otherwise. “We found over 40 lion carcasses in 18 months. There were huge amounts of killing.”

To learn more, she set up cameras in parks and wildlife management areas to monitor carnivores, and got much more than she bargained for.

Although face-to-face relations with the Barabaig remained standoffish, the cameras became a sort of liaison. A little while after the dancers’ performance, a group of men from the tribe paid a visit to the camera. They were drunk and goofing off, mooning the camera, when one gentleman fell over and face-planted right in front of the equipment. Later, when Dickman’s group had a friendly encounter with some of the locals (they wanted to charge their cell phones using her equipment), she recognized the same guy and showed him the footage. Eventually, tensions eased, and she was able to get tribe members to discuss and implement strategies to end their lion hunting.

From Tanzania to Tennessee, wildlife cams have captured human behavior at its human-est. Just about any researcher who has a camera trap where people pass by has stories to tell about people getting back to nature.

Last year, an undergraduate student at Virginia Tech was reviewing tape from biologist Marcella Kelly’s camera traps near Mountain Lake Biological Station in Virginia when she came across images of a man, completely naked and scampering around on all fours. “He came up and pretended to bite the camera, which is weird because a lot of our animals do that,” Kelly says. Perhaps even weirder was that this same fellow did his routine not once, but twice—and at cameras spaced one kilometer apart in the woods. “It was pretty hilarious,” she says.

Other encounters between camera and human are less friendly. One time in Tanzania, a boy stole a camera, and Dickman retrieved footage of him running off while it kept filming. Another time, a couple destroyed a camera after it flashed while they were having sex. “They weren’t really a couple, they were married to other people,” Dickman says. It was “an illicit affair in the bush.”

Last fall, Jesse Hacker, a graduate student at DePaul University in Chicago, visited a camera trap he had placed in the city’s popular Lincoln Park. The equipment was trained on a large “puzzle box,” about the size of a microwave, meant to attract birds and other animals and test their ability to solve the challenge of opening the box to get a food treat. When Hacker showed up, he found the box in pieces but the camera was unharmed. Dejected, he returned to the lab and set aside the video. “The next day I watched the footage, and it almost made up for the destruction of the box,” he says with a laugh. 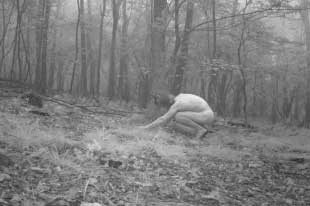 MANIMAL: An unidentified man scurried around naked at camera trap sites in the mountains of Virginia.COURTESY OF MARCELA KELLYAt about 3:30 a.m., a man walked up, crouched down to investigate the box, decided he wanted whatever was inside, and then went bonkers trying to break it open. He punched the Plexiglass, smashed the box, ripped off the solar panel and battery, and then wandered off into the night. But the best part of the scene, which, by the way, took place in late October: the vandal was wearing nothing but a white thong and black running shoes. “I couldn’t begin to tell you what he was doing,” says Hacker.

In another creepy encounter, Roland Kays, the head of the biodiversity research lab at the North Carolina Museum of Natural Sciences, recorded a man defecating in front of—or rather, for—the camera. “He took a crap while staring at the camera. It creeped the student out” who was logging the footage, Kays recalls.

Kays, who published a book on camera trap discoveries in 2016, says human encounters are part of the deal, and people’s privacy should be respected, despite their odd behavior. He says researchers generally don’t share footage of people. Some visitors—like the camera biter Kelly taped—are asking for their performance to be appreciated, he adds. (Kelly posted a selectively blurred photo of the man on Twitter, to the delight of many sympathetic camera trappers.)

But others, such as two people enjoying an au naturel hike in Virginia—Kays dubbed them Adam and Eve—were just peacefully doing their thing. Other than Eve’s shoes, Kays says, the two were nude, “just strolling by, taking a walk in the buff.” People ought to be respectful of the equipment, Kays adds, but otherwise, “they should be able to do what they want to do. . . . I think there’s a lot more people naked in the woods than we’ve gotten pictures of.”