The way Fernando Nottebohm sees it, the collection of groundbreaking discoveries he has made regarding the neural basis of vocal learning in songbirds was mostly a matter of good fortune. "A lot of it was just luck - and making hypotheses that were not tight by any means or persuasive, but that were just kind of groping in the dark and saying, 'If this is so, that might be so,'" he shrugs. "It was not a logically compelling process."

Although logic might not have been compelling, the results certainly have been. In his 40 years at Rockefeller University, Nottebohm was (among other things) the first researcher to map the neural circuits used to learn and produce birdsong, the first to uncover large anatomic sex differences in a vertebrate brain, and the first to present comprehensive evidence for neurogenesis and neuronal replacement in the...

Nottebohm's scientific interests grew from a natural curiosity. "I spent a lot of time just watching birds as a form of entertainment," he says. "But I was also very interested in how the brain does its business." Then, as an undergraduate at the University of California, Berkeley, in the early 1960s, Nottebohm came across Peter Marler, who was studying vocal learning in birds. "That brought the two areas of my interest together," he says. It was as Marler's graduate student in 1963 that Nottebohm made his first accidental discovery.

Marler was studying how birds learn their song, and Nottebohm says he wanted to "get to the neuro side of things." He began by severing all the nerves leading to the syrinx, the bird's vocal organ. "That wasn't a very good approach," says Nottebohm. Although the procedure prevented the birds from executing the song they'd learned, it also killed them. "Turns out the syrinx is necessary not just for sound production but also for breathing," he says. To get around that problem, Nottebohm cut the nerves unilaterally and noticed, "quite by accident," that when he severed those on the right, the birds sang quite happily. But when he cut the left, the birds were silenced. That unplanned observation led Nottebohm to wonder whether the same sort of laterality might exist within the brain itself.

"To pursue that one I had to map out the brain pathways that were used in the production of song," says Notte-bohm. "Only after we had that done could we start tracing the consequences of lesions in different parts to see which parts contributed to learned song." That intense anatomical effort culminated, in 1976, with Nottebohm's description of the song system in birds. It was the first time anyone had identified a brain region responsible for vocal learning in an animal since Pierre Paul Broca's discovery of the area involved in human speech in 1861.

"The discovery of the song system was a very, very big finding, because up to that time such discrete systems involved in controlling behavior were only known in invertebrate animals, worms, and snails," says CalTech's Masakazu Konishi, who was also a graduate student in Marler's lab. "Without that discovery we would still be recording and analyzing bird song and not understanding much about the underlying brain mechanisms today." Art Arnold of the University of California in Los Angeles agrees. "By identifying a neural substrate for singing, Fernando moved the study of song learning to the cellular and ultimately the molecular level."

At the same time, Nottebohm confirmed his suspicions that song learning showed a definite sidedness. Lesions in the circuit on the left side of the canary brain affected song much more than lesions in the right, indicating that the left hemisphere plays a dominant role in singing. "It was very clear, very striking," he says. The finding, which Konishi dubs "very exciting," was another first: "the first animal model of laterality," says Arturo Alvarez-Buylla of the UCSF School of Medicine, who did his doctoral work and a brief postdoc with Nottebohm.

The disparity makes sense, from a behavioral point of view, says Nottebohm. "In birds breeding in temperate zones of the world, males do just about all the singing." They establish territories and then attract their mates through song. "Moreover," he adds, "in many species of songbird, the female does all the incubation. So it serves her well to be very discreet and very quiet and not to advertise the position of the nest." Because females do little singing, their song systems are small or virtually absent, a condition that Nottebohm says "makes good sense in terms of brain economics."

"Fernando is courageous. He's not easily intimidated. Even though he received a tremendous amount of flack when he claimed he saw new neurons in the adult brain, he would not be silenced." -Masakazu Konishi

The song system is not static. In 1980, Nottebohm reported that if he gave testosterone to an adult female canary, in three to four weeks the discrete cell clusters (nuclei) that constitute the song system enlarge, and she begins to sing. "The song doesn't become as complex as a male's and the nuclei don't become quite as large, but all the same there is a change in the behavior and a change in the underlying anatomy," says Nottebohm. Moreover, if an adult female brain were capable of such change, he says, "I thought you should also see it in males when you compare birds in breeding and nonbreeding times of year." That is exactly what he found: When canaries are in reproductive condition and singing copiously, their nuclei expand; when breeding season is over, their nuclei shrink.

"Everybody knew that the testes of temperate-zone species grow and shrink dramatically with the seasons," notes Arnold. "But the fact that the brain would also grow and shrink like that was just a major new idea."

That fact led to perhaps his most controversial finding yet: In the adult bird brain, new neurons are born and incorporated into functional neural pathways. The initial experiment was a simple one. Nottebohm and his student Steve Goldman injected birds with radioactive thymidine, which should label any newly dividing cells. After 30 days, "we were very pleased to see that the treated birds had some nice new cells that looked like neurons."

Proving that these cells were actually neurons was a bit more challenging. In what Arnold describes as a "heroic" set of experiments, published in 1984, Nottebohm and his postdoc John Paton again injected canaries with radioactive thymidine so that approximately 10% of the cells in one of the vocal nuclei, called HVC, were labeled. Then, to prove that these cells were neurons, the researchers randomly inserted an electrode filled with dye into individual brain cells. They used the electrode to assess whether a cell was generating action potentials, and they injected the dye so they could later visualize the cell's anatomy. The results: Of the 74 cells that were identified as neurons by their activity and anatomy, seven were also radioactively labeled, indicating that they were indeed newborn nerve cells.

"There had been earlier claims that new nerve cells could be made in the adult brain," says Alvarez-Buylla, "but they had never been substantiated to the extent that Fernando's lab was able to using electrophysiology and ultrastructural morphology and markers, and taking the time and the effort to convince even the most skeptical people. I think that was very, very important in changing the view of the whole field."

Since then, Alvarez-Buylla and others have found that adult bird neurogenesis also occurs in the mammalian brain, where it plays an important role in learning and memory. At the time, however, "the idea that an adult vertebrate could produce new neurons was heresy," says John Wingfield of the University of Washington in Seattle. "Fernando got a lot of criticism, sometimes extremely aggressive criticism. But they didn't know Fernando. He's the sort of guy who doesn't back down."

Konishi agrees. "Fernando is courageous. He's not easily intimidated. Even though he received a tremendous amount of flack when he claimed he saw new neurons in the adult brain, he would not be silenced." He stuck to his guns and collected the data he needed to turn a beautiful concept into a solid discovery. "That's one of the things that characterizes Fernando's work," says Alvarez-Buylla. "He has very naive, intuitive ideas. Then he follows them up with very strict tests of science."

"I think Eric Kandel once described some of Fernando's ideas as poetic rather than scientific, and Fernando kind of liked that," adds Williams. "But Fernando's poetic ideas don't stay just poetry. He gives them the scientific foundations to hold them up."

He also enjoys pursuing unusual findings. "Fernando loves it when data don't make sense according to received wisdom," says Williams. "He knows when something's exciting and new and he has a love of the new thing," adds Arnold.

These days Nottebohm is elbow-deep in exploring how singing controls the birth and death of neurons in the adult brain, and with identifying the genes that make replaceable neurons replaceable. Such findings could lead to advances in repairing brains that have been damaged by aging or disease. Although he's mired in molecules, Nottebohm is still driven by his fascination with behavior. "He's never lost that sense of how wonderful it is to be working with animals - how interesting animals are and what watching them can tell you," says Williams, who notes that Nottebohm once kept bats as pets. "He used to carry them around in his shirt pocket hanging upside down from an index card. He would have this big grin on his face when he had one in. It made him happy all day."

That sense of fun contributes to Nottebohm's success. "I'm a bit of an iconoclast as a scientist," he says, "in part because I always thought of science as a hobby rather than a serious business." But his biggest asset, says Nottebohm, has been his ignorance. "People who know too much seldom discover anything," he says. "To be a discoverer, there has to be a degree of irreverence, of ignorance, that in a way frees you to do experiments that otherwise you wouldn't dare." 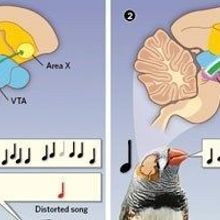