With a passion for microbes and genetics and a PhD from Duke University, Niki Spahich channels her research and science communication experiences into her role as a science editor for the Creative Services Team. 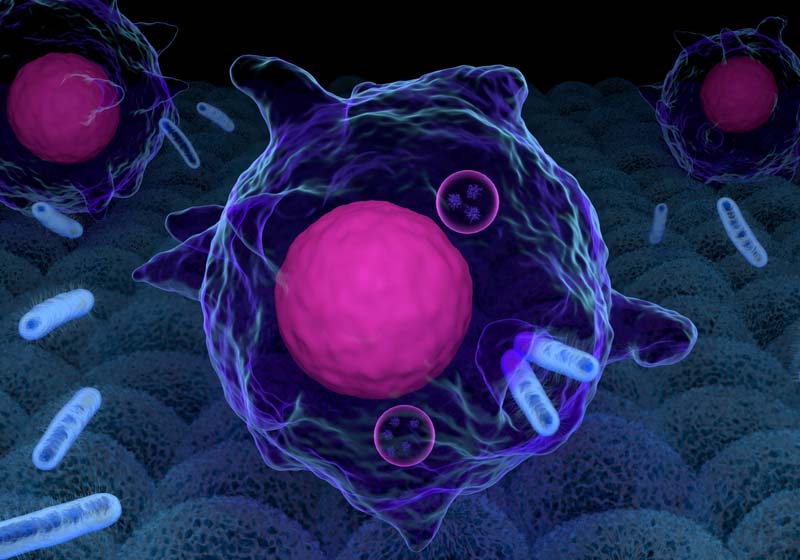 Salmonella living within macrophages can survive antibiotic treatment and potentially give rise to resistance by two different mechanisms that slow or arrest their growth.
iStock

Bacteria that are resistant to antibiotics thrive in the face of drug treatment, which can lead to life-threatening, often incurable infections. Other bacteria can exist in a pre-resistant state. To survive, these bacteria slow their growth in response to antibiotics, allowing for mutations to arise that help the bugs tolerate the drug, or shifting their phenotypes to help them persist in its presence. Once the antibiotic treatment ends, the few remaining bacteria can grow again, restoring the infection.1

Infections that can’t be treated are a significant problem. To search for ways to fight this growing health threat, Peter Hill and his colleagues at Harvard Medical School teased apart how antibiotic tolerance and persistence arise.2  They recently reported in Cell Host & Microbe that tolerance comes from mutations in genes related to nutrient production while persistent bacteria activate a specific DNA repair pathway to survive.

“Antibiotic resistance is, in some ways, the end stage of a problem,” said Peter Hill, now a research fellow at Imperial College London and co-first author of the recent work. “If you can stop those…initial processes from happening, you can stop the end process.”

To find out which mutations were responsible for tolerance, Hill’s team infected macrophages with a strain of Salmonella that causes recurrent diarrheal disease,3 induced tolerance by exposing them to antibiotics, and sequenced the genomes of the surviving bacteria. They found mutations that stopped the bacteria from making certain molecules essential for life. Bacteria that cannot make these compounds grow slowly, which causes them to survive in the face of antibiotics that target dividing cells. Because tolerant bacteria only grow in nutrient-rich environments, Hill saw that the tolerant Salmonella were sensitive to antibiotics once they moved to favorable conditions.

Next, the team studied antibiotic persistence, which results from a phenotypic switch that temporarily slows or stops growth in a small portion of antibiotic-susceptible bacteria. Like the tolerant bugs, the persistent bacteria grew slowly, if at all, within macrophages treated with antibiotics. But the researchers found that persistent Salmonella came alive in the macrophages once they removed the antibiotic stress.

Because persistence arises from a phenotypic shift rather than a mutation, Hill and his colleagues performed RNA-sequencing on the persisters to see how antibiotic treatment affected gene expression in this dormant population. They observed an increase in a stress response pathway that bacteria induce in response to DNA double-strand breaks (DSBs)—a common side effect of genome replication within hostile macrophages.

Additionally, Hill’s team discovered that to survive in the face of drugs and macrophages, Salmonella persisters required a DNA repair mechanism to activate the stress response and repair the DSBs. After damage repair, the persisters reinitiated infection in new host cells, which mimics recurrent clinical infections.

From the Lab to the Clinic

Testing macrophages in a lab offers a lot of information, but Hill and his team wanted to know what happens during infections in the human body. They obtained patient samples of a similar Salmonella strain and sequenced the bacterial genomes. To their surprise, they did not identify any of the tolerance mutations that showed up in their cell culture experiments. Instead, the isolates’ growth in antibiotic-treated macrophages mimicked that of persistent bacteria; there was a subpopulation that was not as susceptible to antibiotics and had robust activation of the DNA repair response.

“The observation that clinical isolates seem to behave closer to the persisters in terms of the [DNA repair] response is very interesting,” Nathalie Balaban, a professor at the Hebrew University of Jerusalem who was not involved in this study, wrote in an email.  “It would be also good to see whether [the clinical isolates] reinfect macrophages better.”

Understanding the role of DNA repair in driving persistence and tolerance will help researchers develop other treatment strategies for bacterial infections. Blocking the DNA repair necessary for Salmonella survival in combination with antibiotic treatment may stop infection relapse and slow the development of antibiotic resistance.