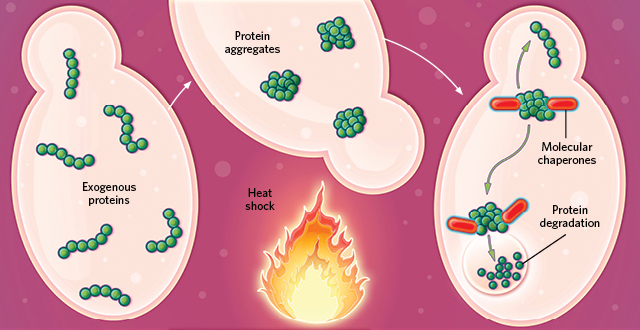 SHOCKED OUT OF SHAPE: Exogenous proteins in a cell denature and aggregate in misfolded clumps when heat-shocked. During cell recovery, specialized molecular chaperone proteins degrade and dispose of the aggregates. A small portion of the exogenous proteins may refold, escaping degradation.© EVAN OTO/SCIENCE SOURCE 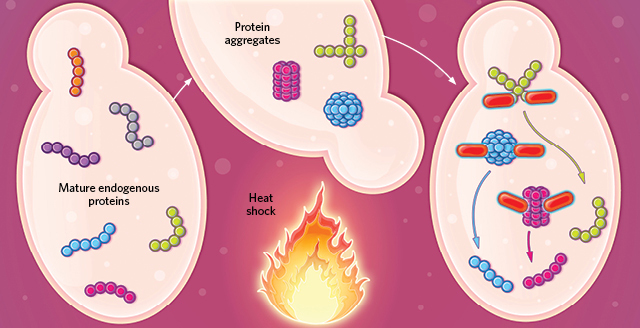 Like cooking an egg, heating up a purified protein enough will denature it, destroying the 3-D structure key to its functionality. The protein unfolds in a one-way trip to a fried state. Previous studies of this phenomenon in cells often...

“That, and other examples, had convinced people that what they were seeing inside cells, the clumps of proteins, represented a disaster—these giant piles of damaged proteins shoved together inside the cell so they can ultimately be cleaned up,” reflects Allan Drummond, a molecular biologist at the University of Chicago. “Nobody had really looked systematically at what happens to the proteins that are native to the cell.”

To do so, Drummond and colleagues tagged proteins in yeast cells with a set of stable isotope labels. They subjected the cells to temperatures that would stress, but not kill, them and then flash-froze them within minutes to capture a snapshot of protein aggregation at different intervals. The researchers then analyzed the clumped proteins using mass spectrometry.

Drummond’s group identified 982 proteins in the yeast cells, 177 of which aggregated in the cytosol and nucleus after heat shock. However, the researchers’ isotope labels revealed something unexpected: aggregated proteins were unclumping and returning to their previous states during the cell’s recovery period. “We had no cases that we were able to detect where proteins go into aggregates and then are degraded,” says Drummond.

“It’s really challenging this long-held assumption that heat stress causes terminal aggregation. They’ve shown that we get these aggregates or assemblies that are reversible and that may actually be pro-survival,” says Kevin Morano, a microbiologist at the University of Texas Health Science Center at Houston who studies cellular responses to stress. “It is paradigm-shifting in a sense. We thought they were destroyed.” But in fact, the researchers found, the yeast cells began growing again without making substantial numbers of new proteins, suggesting that the proteins coming out of the aggregates were still functional.

Drummond’s group figures that heat stress, and the ensuing aggregation, may trigger the cell to produce more of its molecular chaperones to aid in recovery. The team observed a three-protein complex, needed to synthesize chaperones, that was active even while clumped with other proteins. “There are many different things that aggregation seems to be doing,” says Drummond. “It’s stopping the synthesis of most proteins, but promoting synthesis of a small set of proteins that are called in response to heat shock.”

Postdoc Edward Wallace, the lead author on the study, says halting the production of most other proteins may protect newly synthesized ones. Before they have folded into their mature shapes, new proteins are more susceptible to heat shock—and may still be degraded following stress. “We speculate that [the aggregated complexes] are remodeling protein synthesis, stopping the majority of new proteins from being made, and thus preventing the aggregation of these newly synthesized proteins,” says Wallace.

Editor's Note (December 2): The sub-headline for this article was changed to emphasize the finding that most proteins regain functionality.