Staring at her images of neurons in living humans’ eyes, Zhuolin Liu got an inkling that she could also see traces of another cell type on the surface of the retina. The images came from a study completed as part of her postdoctoral research at Indiana University (IU) Bloomington, and though the focus of that work had been neurons in the retina, the glimpse she got of what looked like macrophages led her to wonder if she and her colleagues could get a better view of the immune cells and probe their dynamics.

Macrophages on the surface of the retina look and act like microglia, the sentinels of the central nervous system. They had been studied extensively in rodents but haven’t been visualized in real time in the eyes of living humans. Doing so, says her collaborator Daniel Hammer, a researcher at the US Food and Drug Administration (FDA), would offer a better understanding of how they protect the eye. “People are familiar with the [saying] that the eye is the window to the brain,” he says. “Retinal imaging gives us a unique platform to study how the macrophages and other cells react to diseases” such as glaucoma, multiple sclerosis, and Alzheimer’s. 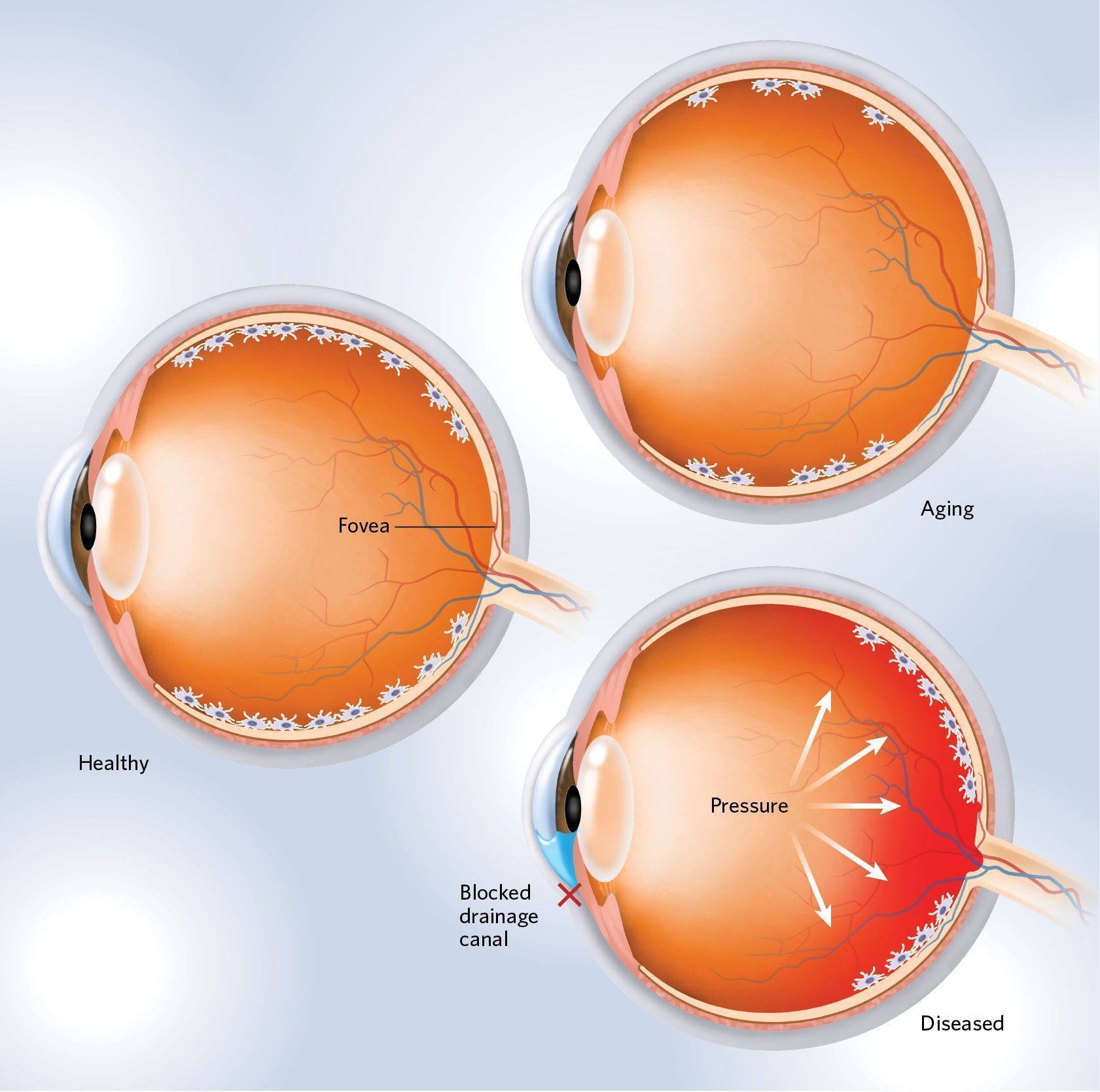 DAMAGE SENSORS: Imaging a healthy eye reveals that macrophages line the inner surface of the retina. They are sparse near the fovea and more densely packed farther from it, similar to nerve fiber bundles (not pictured) in the inner retina. Humans lose roughly two percent of these cells each year. As certain eye diseases progress, macrophages move to damaged areas, including near the fovea, and play a role in disease processes. One disease where this occurs is in glaucoma, where drainage canals get blocked, increasing pressure and damaging the optic nerve. WEB | PDF
© KELLY FINAN

Hammer teamed up with Liu, now also at the FDA, and others and to image the immune cells, using a technique that Liu had developed at IU. It combines an existing clinical imaging method known as optical coherence tomography that noninvasively uses near-infrared light to take cross-sectional pictures of the retina with adaptive optics, which manipulates light to improve image resolution and provides a detailed looked at retinal immune cells. With this technology, the team was able to pinpoint the location of the macrophages on people’s retinas and found that in the eyes of healthy individuals, there were fewer cells near the center of the retina but the cells were more densely packed at the periphery.

That distribution, which is vastly different than in rodents, may appear because primates, including humans, have a pit, or fovea, in the eye, which is essential for clear vision. “During development, your photoreceptors move towards this fovea and the inner [retinal] layers move away from it, and it develops this pit,” Hammers explains. The macrophages consume the extracellular debris from the inner layers, but there are no inner layers near at the fovea, which could explain why there are no macrophages at the fovea of healthy eyes, he says.

Macrophages at the inner surface of the retina probe their local environment in this time-lapse sequence that lasts roughly 25 minutes.
DANIEL HAMMER AND ZHUOLIN LIU

That macrophage distribution remained the same in older, healthy individuals, though the team did find that levels of the immune cells at the retinal surface drop off at a rate of roughly two percent a year after age 20. “Cell density decreases as we age, which means the cells are not replenished as they are used up, so this may play a role in how our eye is able to deal with cellular debris later in our lives,” Liu explains.

The team also observed that people with glaucoma did not have the same distribution of retinal macrophages as healthy individuals, but rather had collections of the cells in areas of active disease. Macrophages, like other innate immune cells, seem to act as “sensors and regulators of disease states in the retina,” notes Alejandra Bosco, a neurobiologist at the University of Utah who was not involved in the study. If changes to the cells can be visualized and monitored over time, she writes in an email to The Scientist, they could serve as “biomarkers or indicators of disease initiation and severity.”