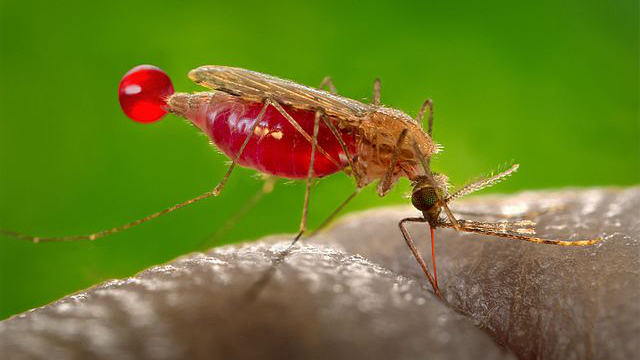 WIKIMEDIA, CDC/JAMES GATHANYInfection with the malaria-causing Plasmodium parasite makes children smell more enticing to Anopheles gambiae mosquitoes, which carry the disease. An increase in emissions of chemicals known as aldehydes accounted for much of the change in attractiveness, researchers reported yesterday (April 16) in PNAS.

While it was already known that people with malaria are more attractive to mosquitoes than their healthy counterparts, the reason why has not been clear. The new study, therefore, “is very cool, and it’s been needed for some time,” parasitologist Audrey Odom John of Washington University School of Medicine in St. Louis who was not involved in the study tells News from Science.

In the study, researchers tested the attractiveness of the odors of children with and without malaria by exposing A. gambiae mosquitoes to the children’s socks. Given a choice between a sock worn by a child when he or she...

“The malaria parasite is sort of manipulating the system both in the mosquito host and the human host,” study coauthor James Logan, a medical entomologist at the London School of Hygiene & Tropical Medicine, tells News from Science. “It’s very clever.”

The finding could be useful in devising chemical lures to trap mosquitoes, the authors of the study write. In addition, Logan tells Newsweek, “There’s a great need for development of new noninvasive diagnostic tools. . . . Using odors to detect the presence of malaria parasites could be such a novel method. It is important to diagnose carriers of malaria parasites even if they don’t feel sick (enough) to visit a clinic.”

Correction (April 18): The photo originally used with this story depicted a genus different from the one used in the study, and has been replaced. The Scientist regrets the error.