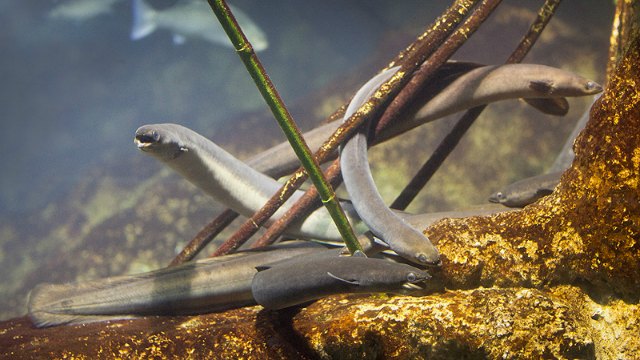 WIKIMEDIA, DMITRIY KONSTANINOVThe long journeys of European eels (Anguilla anguilla) from the Sargasso Sea in the North Atlantic Ocean to European rivers and streams have baffled scientists for more than a century. But the eels may be helped along their winding trajectories by employing an uncommon sense: magnetoreception.

In Current Biology on Thursday (April 13), researchers reported that juvenile eels use magnetic fields to guide the direction they’re heading. “The eels oriented in a manner that would increase their entrainment into the Gulf Stream system,” Lewis Naisbett-Jones, who led the study while he was a student at Aberystwyth University in the U.K., told NPR.

Naisbett-Jones collected young A. anguilla and put them in a tank. He then subjected the fish to various magnetic fields and watched which way they swam. A magnetic field simulating what the animals would experience in the Sargasso Sea led the fish...

“This study adds to the growing body of evidence that the magnetic sense may be an important component of fishes that make long migrations in the ocean,” Michael Miller, an eel biologist at Nihon University in Fujisawa, Japan, told Science.

Last year, a different group of researchers made another insight into eel migration: they tagged the slippery adults with electronic data loggers and found—contrary to the century-old belief that eels make it from European freshwater to spawning grounds in the Sargasso Sea in a single season—some individuals linger out at sea for a year.

“We can say that it’s highly unlikely that a significant number of the eels leaving Europe will actually make it down to the Sargasso Sea ready for the coming spawning,” Kim Aarestrup, a senior researcher at the National Institute of Aquatic Resources in Denmark and one of the authors of the study, told The Scientist several months ago. “Which then leads us to the conclusion that they’re probably part of the next spawning, which happens 12 months later.”

Naisbett-Jones’s study did not meet with universal enthusiasm. As Gizmodo reported, the paper was first turned down by Nature Communications. “I identified the major weaknesses of their study such as the use of the wrong life-stage: using 2 year old eels called juveniles [or “glass eels”] and assuming they would behave as newly hatched larvae,” Caroline Durif, a senior research scientist at the Institute of Marine Research in Norway who reviewed the paper for Nature Communications, told Gizmodo. “Compared to larvae, the glass eels have undergone a metamorphosis and have a totally different sensory system.”