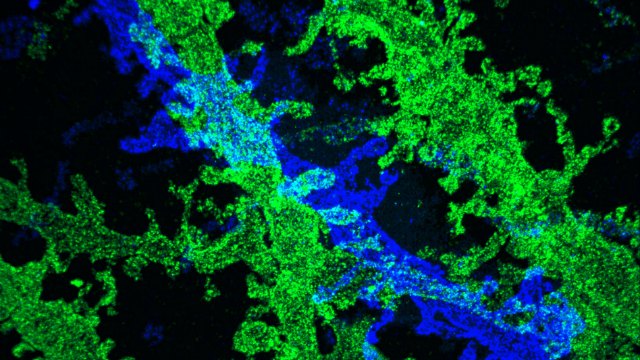 IMAGE COURTESY OF THE AUTHORSWith expansion microscopy—which stretches out cells so researchers can image their nooks and crannies—scientists used to be able to achieve a resolution of 60 nm. In Nature Methods yesterday (April 17), MIT’s Ed Boyden and colleagues reported that, by subjecting neurons to a double dose of the expansion process, they could achieve a resolution of around 25 nm on conventional microscopes.

“The technique has yielded detailed images showing the formation of proteins along synapses in mice, as well as detailed renderings of dendritic spines . . . in the mouse hippocampus—a center or learning and memory in the brain,” according to Science.

It works by embedding a brain sample in a polymer gel—the material found in diapers...

In a press release, Boyden expressed interest in combining his team’s technique with temporal multiplexing, which allows for sequential labeling and imaging of various molecules of interest with differently colored fluorescent tags. By marrying the two methods, “we could in principle have essentially infinite-color, nanoscale-resolution imaging over large 3-D volumes,” he said in the statement. “Things are getting really exciting now that these different technologies may soon connect with each other.”