Last December, scientists at Juno Therapeutics reported at the American Society of Hematology (ASH) meeting that, in an ongoing Phase 1 trial, its chimeric antigen receptor (CAR) T-cell therapy, JCAR015, put 24 of 27 adults with refractive acute lymphoblastic leukemia (ALL) into remission, with six patients remaining disease free for more than a year (ASH 2014, Abstract 382, 2014). This disease is extremely hard to treat and progresses rapidly when it becomes refractory; most patients die within a few months. “This response rate is unprecedented for patients who had stopped responding to all other treatments,” says Michel Sadelain, a founding director of Memorial Sloan Kettering’s Center for Cell Engineering and a cofounder of Juno.

Founded just a year earlier, the Seattle-based company now has four CD19-targeting CAR T-cell therapies in trials. The premise is simple: extract a patient’s T cells from blood and train them to recognize and... 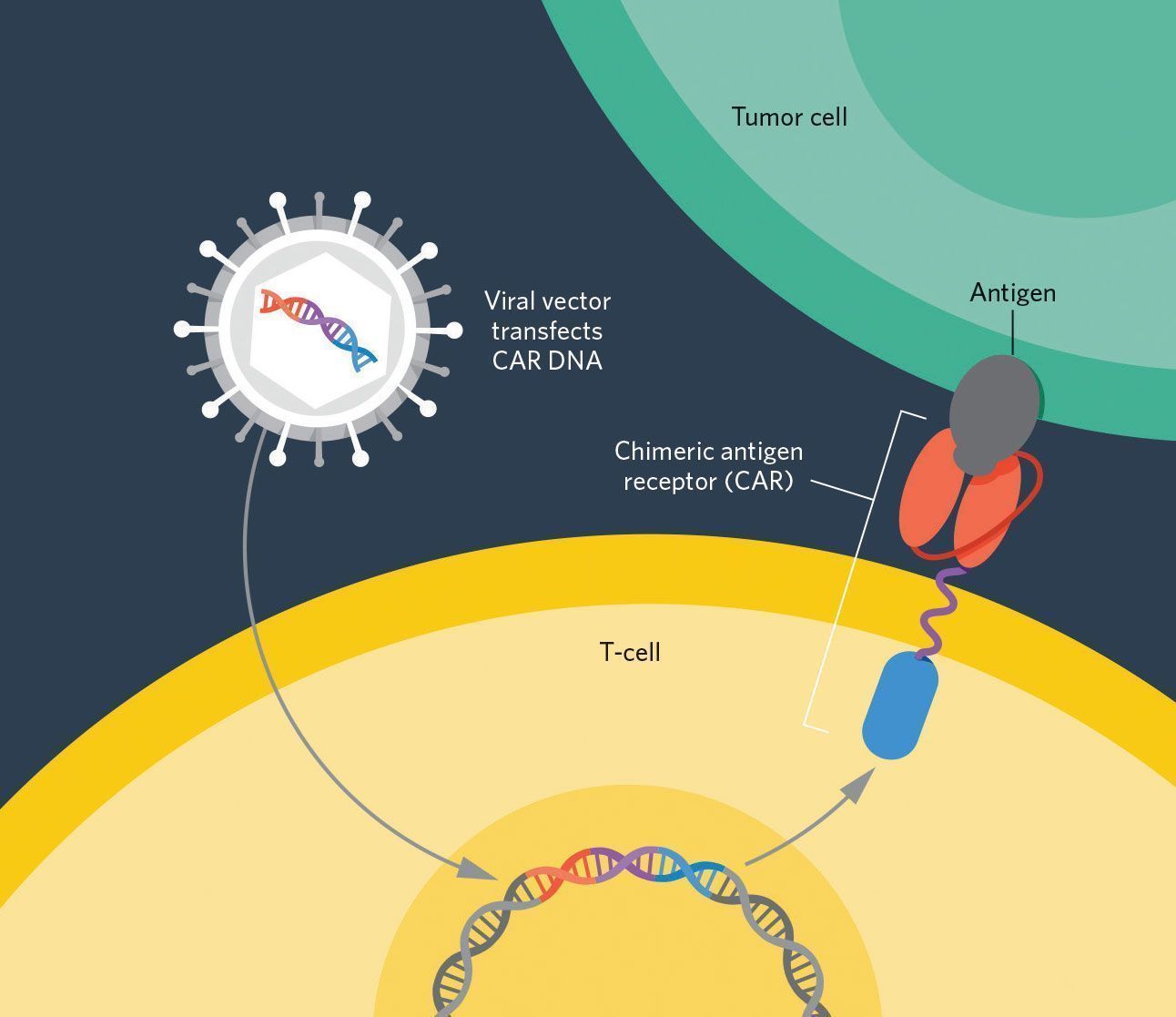 BUILDING A BETTER T-CELL: By modifying T cells to express chimeric antigen receptors (CARs) that recognize cancer-specific antigens, researchers can prime the cells to recognize and kill tumor cells that would otherwise escape immune detection. The process involves extracting a patient’s T cells, transfecting them with a gene for a CAR, then reinfusing the transfected cells into the patient.
© LUCY READING-IKKANDA

A few weeks after the ASH meeting, Juno went public for a whopping $264.6 million, the largest biotech initial public offering (IPO) of 2014. Within a month, the company’s valuation rose from $2 billion to $4.7 billion, the largest among biotechs in a decade. By the end of 2016, the company plans to have 10 drug trials for six diseases up and running using CAR T cells produced in a brand-new manufacturing facility.

And Juno is not alone. This relatively new sector is experiencing a frenzy of scientific activity, corporate partnering, and financing that took off in late 2013, continued throughout 2014, and moved straight into the new year with no sign of letting up. By now, most major pharmaceutical companies have jumped into the CAR T-cell arena. In the past two years alone, at least half a dozen companies have made deals worth hundreds of millions of dollars up front, with much more expected in the future as products move through the pipeline. (See chart below.) This influx of funding is now supporting dozens of clinical trials.

While most of these studies are currently aimed at late-stage disease for which other therapeutic options have failed, researchers in the field anticipate that these immunotherapies could replace standard cancer treatments in the future. “While we are evaluating these therapies in advanced cancer now, we absolutely believe that they have the potential to become frontline therapies,” Sadelain says.

CAR T-cell therapy has had a lengthy run-up to what may appear to be overnight success. The first CAR T cells were developed at the Weizmann Institute of Science in Israel in the late 1980s by chemist and immunologist Zelig Eshhar. In 1990, Eshhar took a year-long sabbatical to join Steven Rosenberg at the National Institutes of Health, where they prepared CARs that targeted human melanoma. “We designed CAR T cells to overcome a number of problems in getting T cells to attack cancer,” says Eshhar. These problems included a tumor’s ability to escape immune recognition by silencing the major histocompatibility complex molecules and the generally immunosuppressive tumor microenvironment.

NEW AND IMPROVED CARs: Zelig Eshhar and Steven Rosenberg constructed the first CAR T cells using a modular design, including a specific cancer-targeting antibody outside the cell, a transmembrane component, and an intracellular costimulatory signaling domain that amplifies the activation of the CAR T cells. Second- and third-generation CAR T-cell technologies have added additional costimulatory domains within the cells, as well as additional receptors to improve targeting of the T-cell attack and minimize side effects.© LUCY READING-IKKANDA

Eshhar and Rosenberg constructed the CAR T cells with a modular design that included a specific cancer-targeting antibody, and later added a costimulatory signaling domain that amplifies the activation of the cells, giving them a stronger signal to multiply and kill cancer cells. Since that early work, researchers in both academia and industry have developed and tweaked each section of the modular design. (See illustration above.) “Ultimately, we needed 20 years to learn how to supercharge these cells to deliver anticancer activity,” says Arie Belldegrun, president and CEO of Kite Pharma in Santa Monica, California, which is assessing CAR T cells in six trials for B cell leukemia and lymphomas, and glioblastoma. Eshhar, a member of Kite Pharma’s scientific advisory board, continues to collaborate with Rosenberg, who serves as a special advisor to the company.

Juno is now working on two second-generation CAR technologies that incorporate mechanisms to further amplify T-cell activation or to dampen it, in the case of adverse reactions. (See “Safety concerns.”) These so-called “armored” chimeric antigen receptors are designed to combat the inhibitory tumor microenvironment by incorporating a signaling protein such as IL-12, which stimulates T-cell activation and recruitment. Juno believes “armored CAR” technology will be especially useful for solid tumors, whose microenvironment and potent immunosuppressive mechanisms can make raising antitumor responses more challenging.

Like Juno, Houston, Texas–based Bellicum Pharmaceuticals is working on refinements for next-generation CAR T-cell treatments. To better control antigen activation by its CAR T cells, for example, Bellicum is separating its dual costimulatory domain from the antigen-recognition domain, moving it onto a separate molecular switch that can be controlled by the small-molecule drug rimiducid. These T cells, known as GoCAR-Ts, can only be fully activated when they are exposed to both cancer cells and the drug.

In addition to altering the components of the CAR T cells themselves, researchers are also experimenting with different methods to introduce the receptors into the patients’ cells. At MD Anderson Cancer Center in Houston, Laurence Cooper and his colleagues are using a nonviral system called “Sleeping Beauty,” licensed from the University of Minnesota’s Perry Hackett, that relies on a transposon derived from fish to paste any desired gene into the genome. “This system employs electroporation [an electric current] to introduce elements of the Sleeping Beauty system into T cells,” says Cooper, who hopes the system will be less complex and cheaper to use than viral vectors.

While CAR T cells are being tested first as monotherapies, researchers are also giving thought to how best to use CAR T cells with other immunotherapies in the future. “We are excited about combining checkpoint inhibitors such as PD-1 [programmed death-1] inhibitors and anti-CTLA4 [anti-cytotoxic T-lymphocyte antigen 4] drugs with CAR T cells,” Eshhar says.

A frenzy of deal making

Over the past few years, the industry has been a hive of activity, with a half dozen companies forging deals valued at more than a half billion dollars in total. In addition to the perceived financial potential of these therapies, the feeding frenzy may in part be attributable to the fact that regulatory authorities are giving CAR T-cell treatments priority review for filling unmet medical needs. Many of these therapies are receiving orphan or breakthrough status from the US Food and Drug Administration (FDA), bringing expedited regulatory review, which translates into earlier realization of financial benefits from more rapid market entry. In November 2014, for example, the FDA granted orphan status to Juno’s JCAR015. Kite’s KTE-C19 for refractory aggressive non-Hodgkin’s lymphoma also recently received the designation from both the FDA and the European Medicines Agency. And the University of Pennsylvania /Novartis’s CTL019 for ALL received breakthrough status last July.

A new report by EP Vantage, the editorial team at life science market intelligence firm Evaluate Ltd, notes that while investor enthusiasm for this sector is unlikely to diminish anytime soon, “there may be hidden dangers” for those in it to make a big return. “CAR T therapy looks like it’s becoming little short of a revolution in the treatment of some cancer types, but numerous risks are being lost in the hype,” writes report author Jacob Plieth, a biochemist by training. “It is important to appreciate the risks as well as the opportunities to have a clear understanding of the market potential of these therapies and their developers.”

In 2011, the Penn group described the results of an early trial of its CTL019 CAR T-cell treatment in three advanced chronic lymphocytic leukemia (CLL) patients (Sci Transl Med, 3:95ra73, 2011). The findings—including two patients who have now remained in remission 4.5 years after their treatment—served as an early demonstration that CAR T cells can successfully treat patients with late-stage disease. The team has now tested CAR T-cell therapies in about 125 people, with six different trials underway for pediatric and adult ALL, CLL, multiple myeloma, and non-Hodgkin’s lymphoma. Other CAR T-cell therapies are in trials for solid tumors, including ovarian, breast, and pancreatic cancers, and mesothelioma and glioblastoma.

“One of the exciting things about these cells is that they expand to high numbers and maintain long-term functional persistence,” says David Porter, a leukemia specialist and director of blood and marrow transplantation at Penn.

In a recent Penn study of 30 children and adults with relapsed or refractory ALL who received CTL019, 90 percent achieved total remission, and 78 percent were still living at the end of the study two years later (NEJM, 371:1507-17, 2014). Moreover, “very few patients—three—got a bone marrow transplant after CTL019, suggesting that this could be a replacement for bone marrow transplant and not just a bridge to transplant,” added senior author Stephan Grupp, director of translational research for the Center for Childhood Cancer Research at the Children’s Hospital of Philadelphia.

At ASH, Grupp discussed a follow-up study, including 39 pediatric patients, which showed a 92 percent complete remission rate following CTL019 treatment. Of those, 76 percent remain in complete remission after six months (ASH 2014, Abstract 380, 2014). “The first ALL patient treated is still in remission nearly three years later,” says Grupp. In September, Novartis pledged $20 million to build a Center for Advanced Cellular Therapeutics to manufacture CAR T cells on the Penn campus, to be completed next year. Penn is now conducting pilot trials aimed at solid tumors, including mesothelioma; ovarian, breast, and pancreatic cancers; and glioblastoma.

A team at the National Cancer Institute, including Rosenberg, has also reported successes with CAR T cell therapy, focusing on patients with refractory diffuse large B-cell lymphoma, an aggressive disease for which survival without treatment is measured in months. Following treatment with CD19-targeting T cells, 22 of 27 patients had either complete or partial remissions; 10 have remained cancer free for up to 37 months (ASH 2014, Abstract 550, 2014). These and other trials have demonstrated that CAR T-cell therapies can successfully treat leukemias and lymphomas in some patients for whom there are no other treatments.

There are currently many other CAR T-cell trials underway in leukemia and lymphoma, and more beginning in the near future. Scientists in this arena are energized by these and other results, and many see CAR T-cell therapies as the future of cancer treatment. “I believe these trials indicate that chemotherapy may be on its way out,” says MD Anderson’s Cooper.

Corrections: This story has been updated to correctly reflect Cellectis’s IPO date and value. The previous version of this story listed the amount the company filed for ($115 million) in February.

The description of EP Vantage has also been updated from "a financial analysis company" to "the editorial team at life science market intelligence firm Evaluate Ltd."

The Scientist regrets the errors.