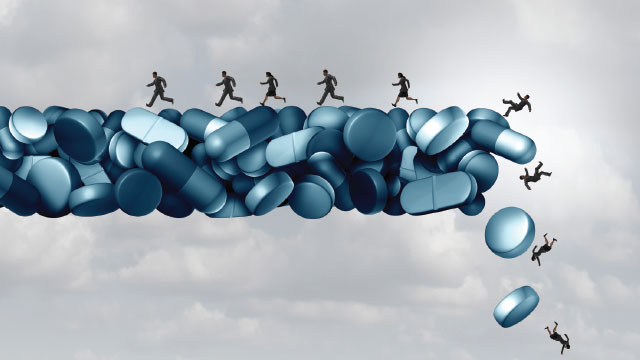 Opioid drugs are well-established double-edged swords. Extremely effective at analgesia, they cause an array of harmful side effects throughout the body, including itching, constipation, and respiratory depression—the slowed breathing that ultimately causes death in overdose cases. What’s more, the body’s interaction with opioids is dynamic: our receptors for these compounds become desensitized to the drugs’ activity over time, requiring ever larger doses to suppress pain and eventually provoking severe dependence and protracted withdrawal.

In the past few years, these side effects have plagued growing numbers of US citizens, plunging the country into the throes of a devastating opioid crisis in which nearly 100 people die from overdoses every day. Even so, opioids are still among the most effective pain-relief options available. “Over hundreds of years, [opioid receptors] have remained a target,” says Laura Bohn, a biochemist at the Scripps Research Institute in Jupiter, Florida. “Therapeutically, it...

Since the early 2000s, intriguing evidence has emerged suggesting that opioids’ useful properties could be separated from their harmful attributes. (See “Pain and Progress,” The Scientist, February 2014.) In 2005, Bohn, then at the Ohio State University College of Medicine, and colleagues showed that shutting down one of the signaling pathways downstream of the opioid receptor targeted by morphine not only amped up the drug’s painkilling effects in mice, but also reduced constipation and respiratory depression (J Pharmacol Exp Ther, 314:1195-201).

That research opened the door to developing a new type of opioid: a “biased agonist” that could trigger analgesia without tripping the switches on other pathways that cause side effects. Now, more than a decade later, Trevena Inc.’s Olinvo (oliceridine)—a drug based on this principle and designated by the US Food and Drug Administration (FDA) as a breakthrough therapy—has completed Phase 3 clinical trials.

Olinvo is just one of many such drugs under development. From compounds that act only in specific regions of the body to those that engage multiple receptor types, researchers and pharmaceutical companies are trying many different tactics to produce less-dangerous opioids.

Hitting where it hurts

Although the main types of opioid receptors—mu, delta, and kappa—and the nociceptin receptor (NOP), previously called the opioid receptor–like receptor, are located on multiple cell types throughout the body, the ones in the central nervous system (CNS) are the most critical for managing body-wide pain. Hitting CNS receptors, however, can also light up reward centers in the brain, causing an immediate high, drug-seeking behavior, and eventual dependence if use is continued.

Some types of pain are localized, though. For example, when immune response–mediated inflammation around damaged tissue triggers pain-sensing neurons, pain may be felt only at the site of the inflammation. Because inflamed tissues are more acidic than their surroundings, a group led by anesthesiologist Christoph Stein of the Charité university hospital in Berlin, Germany, wondered if it would be possible to exploit pH to restrict an opioid’s activity to the site of pain, thus avoiding the CNS altogether. Using computer simulations of interactions between the mu opioid receptor and the drug fentanyl, the researchers designed molecules that were active only under acidic conditions, including a new opioid receptor agonist called NFEPP, a modified version of fentanyl. Tested on rats with foot injuries, NFEPP treated pain without addicting the rodents to the drug or slowing their breathing (Science, 355:966-69, 2017). Although the road to the clinic is long, Stein notes that the compound could be useful in both surgical settings and as a replacement for anti-inflammatory drugs (NSAIDs) such as ibuprofen, which carry their own toxicities.

Cara Therapeutics’s compound CR845, a kappa agonist, is also designed to target pain at the source—although rather than being specifically targeted to peripheral nerves, it avoids the CNS thanks to a peptide structure that reduces the compound’s ability to cross the blood-brain barrier, according to the company.  Intravenously administered CR845, currently in Phase 3 trials, has been tested for both chronic and acute pain, as well as itching, and shows relatively minimal opioid side effects, the company reports; the oral formulation, meanwhile, is in Phase 2 trials. Bob Twillman, executive director of the Academy of Integrative Pain Management (AIPM) tells The Scientist that such a drug could be particularly valuable for pain caused by inflammation, such as in arthritis, or in a post-operative setting.

Meanwhile, rather than blocking entry into the CNS altogether, Nektar Therapeutics is trying to slow it down. The company strategy aligns with research from Nora Volkow of the National Institute on Drug Abuse (NIDA). Her work has demonstrated that cocaine and other abused drugs cause rapid dopamine spikes in the brain’s reward center, the nucleus accumbens.

Nektar’s drug NKTR-181 is active throughout the brain, but consists of a morphine scaffold with short polyethylene glycol chains that slow the compound’s crossing of the blood-brain barrier to avoid inciting wild surges in dopamine. This slowed entry makes the drug a poor choice for acute pain, says Nektar’s chief scientific officer Steve Doberstein, but an excellent one for chronic pain.

The company hopes that NKTR-181’s trial results so far—demonstrating efficacy in treating chronic back pain, with minimal side effects, no withdrawal symptoms, and low abuse potential even at triple the maximum drug dose—will convince the FDA that the compound is ready for a New Drug Application in early 2018. If Nektar successfully clears that regulatory hurdle, the company hopes to launch the drug by early 2019, Doberstein says.

Another approach to managing side effects is to tweak opioid biology by engaging multiple receptors simultaneously. For example, “there’s a whole range of other receptors that modulate mu dependence,” says pharmacologist Andrew Coop of the University of Maryland. Combining a mu opioid agonist with a compound targeting NOP, delta, or kappa receptors can increase analgesia and decrease side effects such as tolerance and dependence—the downregulation and desensitization of receptors so that the drug fails to produce a “high” even at increasing levels and withdrawal causes acute psychological and physiological distress. As a result, several teams are now developing compounds that can hit two receptors at once.

One such molecule is BU08028—an altered version of the existing drug buprenorphine—which serves as a partial agonist of both the mu (buprenorphine’s original target) and NOP receptors. Developed by medicinal chemist Stephen Husbands of the University of Bath in the U.K., BU08028  became the first opioid to successfully treat acute pain in macaques without triggering the side effects of drug-seeking behavior, respiratory depression, or itching (PNAS, E5511-E5518, 2016). As primates are a better model than rodents for human biology when it comes to opioid side effects, the findings suggest that this or a similar drug may stand a good chance of success in people, says study coauthor Mei-Chuan Ko, a pharmacologist at Wake Forest University. Husbands plans to follow up on a similar compound that differs enough from buprenorphine to be patentable.

Meanwhile, Coop is pursuing UMB425, a mu agonist/delta antagonist combo that prevents these receptors from interacting. The compound doesn’t cause dependence, but does lead to drug-seeking behavior in animals (as measured by self-administration of the drug), a side effect Coop is currently working to eliminate. Other efforts underway include Jane Aldrich’s studies at the University of Florida of a cyclic four-amino-acid peptide called CJ-15,208 that hits both kappa and mu receptors, reducing the activation of the reward system.

Yet other multitarget drugs may help identify new target receptor pairings that trigger different downstream pathways to increase pain relief and reduce side effects. For example, Philip Portoghese at the University of Minnesota is studying compounds that bring together targeting of receptors on neurons and on glia—the brain’s immune cells—which become activated during inflammation and sensitize pain neurons. To make analgesia more effective, “we not only have to target and activate the opioid receptors in neurons so that they will inhibit pain, but we have to block glia,” he says. (See “Glia and Pain” here.)

MMG22, a compound designed and generated by Portoghese’s University of Minnesota collaborator Eyup Akgün, does exactly that. It contains an opioid agonist tethered to an antagonist for the metabotropic glutamate receptor 5 (mGLuR5), which in turn targets receptors present in both neurons and glial cells called astrocytes, Portoghese says. The compound has been shown to be effective for both neuropathic and inflammatory pain in mice (Pain, 158:2431-41, 2017). In addition, the drug doesn’t appear to produce tolerance or respiratory depression in rodent models, Portoghese says.

The biased agonism approach suggested by Bohn’s early-2000s mouse studies is also a hot area of research. Bohn herself is investigating a biased agonist targeting the kappa opioid receptor that prevented pain and itch in rodents without causing sedation, increased dopamine levels, or another side effect associated with kappa agonists, dysphoria—the opposite of a high (Sci Signal, 9:ra117, 2016). Such compounds are useful both as potential drugs and as tools to help further unravel the complex biology of opioid receptors, says opioid researcher Gavril Pasternak of Memorial Sloan Kettering Cancer Center. Plus, combining biased agonists with new receptor classes could open the door to new drugs, he adds. “There’s truly a complexity here that hasn’t been scratched.”

To explore that complexity, some researchers are using bioinformatics to find new biased agonists. The University of California, San Francisco team of Brian Shoichet and Aashish Manglik recently unveiled PZM21, a compound effective for pain relief in mice that they identified through a computational screen of three million drugs that bind to opioid receptors’ crystal structures (Nature, 537:185-90, 2016). Their startup, Epiodyne, will seek to commercialize the compound. Pasternak calls the work “an extraordinary step forward,” and notes that the approach allows researchers to identify new compounds that might look nothing like existing opioids—although he cautions that crystal structures might not always reflect a protein’s native conformation.

Nevertheless, Charité’s Stein remains unconvinced that it is possible to separate side effects from analgesia by activating different pathways. Beyond animal studies, “there’s practically no evidence that this hypothesis is true,” he says. Dave Thomas, a program official at NIDA and a member of the National Institutes of Health Pain Consortium, agrees there’s work to be done. “We’re hopeful, but I think we’re still a long way away from a magic bullet,” he says. “We haven’t been able to separate the good and bad of opioids, and it’s not for lack of trying.”

If one or more of these drugs does break through—and a few, including Nektar’s and Trevena’s compounds, appear poised to do so—how might they change pain management and drug abuse? “If we can stop the abuse that leads to addiction, we can cut that cycle off,” says Nektar’s Doberstein. However, he adds that even if NKTR-181 is successful, there will have to be alternatives on the market—50 million people in the U.S. experience chronic pain severe enough to need opioid therapy, and there is unlikely to be a one-size-fits-all solution to their needs.

New opioid medications that reduce harmful side effects would certainly be a useful addition to the toolbox, says AIPM’s Twillman, though he is skeptical that a truly non-addictive opioid will ever exist. Instead, he and NIDA’s Thomas advocate for a multipronged approach to treating pain that also incorporates non-opioid management strategies. “How we got into [the opioid] crisis,” Thomas says, “is by putting all our eggs in the opioid basket.”

A SELECTION OF POTENTIALLY SAFER ALTERNATIVES TO CONVENTIONAL OPIOIDS
Drug developers are investigating three main approaches to creating safer opioid drugs. Biased agonists (found in yellow boxes) are designed to activate only the pathways that cause analgesia, and not those leading to harmful side effects. Drugs employing specific targeting mechanisms (light tan) aim to localize opioid activity to the site of pain and avoid activation of the central nervous system pathways that lead to dependence. Combinatorial compounds (white) target multiple receptors at once to modify receptor activity and reduce off-target effects.