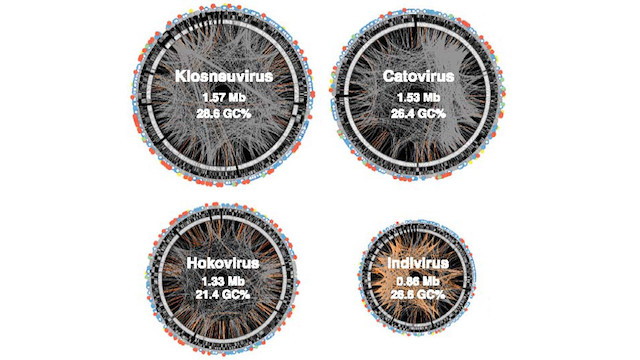 When researchers in France uncovered Mimivirus in 2003, they came across two surprising observations: not only was it much larger than any other known virus, its genome contained sequences that encoded for translational machinery, which are absent in most other viral species. These findings prompted some scientists to propose that Mimivirus descended from a fourth domain...

This theory has been the subject of debate within virology circles for the last decade. Some scientists believe that rather than having a common ancestor, these giant viruses began as small viruses and gradually accumulated host genes over time. Analysis of the Klosneuvirus genome reveals evidence supporting the latter theory, according to the authors of the present study.

Frederik Schulz, a postdoc at the US Department of Energy (DOE) Joint Genome Institute, and colleagues discovered the new viruses while analyzing metagenomic data from a wastewater treatment plant in Klosterneuburg, Austria. “We found long stretches of sequences that are typically found in viruses,” Schulz said. When the team analyzed and assembled the stretches of overlapping DNA, or “contigs,” they uncovered the genomes of four species of related viruses, which they named Klosneuvirus (KNV), after the city where the samples were found.

Not only were these viruses massive (with genomes of up to 1.57 million base pairs), many of their genes encoded for components of the translational machinery, including aminoacyl transfer RNA synthetases that interacted with nearly all the amino acids.

“This is not [uncommon] for giant viruses, but the extent was much broader then what had been previously described in any other giant virus,” study coauthor Tanja Woyke, the leader of the microbial genomic program at the DOE Joint Genome Institute, told The Scientist. “That really piqued our interest, because we thought this could be a good organism to test some of the existing hypotheses about how giant viruses evolved.”

The team also conducted phylogenetic analyses on these datasets, which revealed that while the number of translation-related genes shared between the giant virus families was low, many of these genes overlapped with those typically found in eukaryotes. “This allowed us to say that this virus evolved from small viruses by taking up genes from different eukaryotic cells over potentially long periods of time,” Schulz told The Scientist.

“From what I’ve seen in this paper, I trust the authors’ conclusions that the translational system present in these viruses is of very mixed origin, and does not originate from one single source,” Matthias Fischer, a group leader at the Max Planck Institute for Medical Research in Heidelberg, Germany, who was not involved in the work, told The Scientist. The question, he added, is why these giant viruses picked up the translational components over time. “There must be some kind of selection pressure that drives genomes in this direction for this particular lineage, whereas other giant viruses do very well without almost no components of the translation system.”

Not everyone agrees that this study provides sufficient evidence to support the theory that giant viruses evolved from smaller ones. “We are at the beginning of the history [of the study of giant viruses], and it’s very early to make generalizations about this,” said Didier Raoult, the director of the Research Unit on Infectious and Emerging Tropical Diseases at Aix-Marseille University, France. Raoult, one of the scientists who discovered Mimivirus, was not involved in the current study. “I don’t believe that you can make any conclusion on the origin of this giant virus just because you find that amino acid transferases are subject to lateral gene transfer—these are the genes that are most commonly exchanged,” he told The Scientist.

Jean-Michel Claverie, a professor of genomics and bioinformatics at Aix-Marseille University, and another co-discoverer of Mimivirus, is also unconvinced. He pointed out in an email to The Scientist that metagenomic analyses, particularly with low coverage, can lead to chimeric artefacts—a mixture of DNA sequences from various viral and eukaryotic species—rather than the complete genome of a new virus. However, study coauthor Eugene Koonin, a senior investigator at the National Center for Biotechnology Information, defended the use of metagenomics, pointing out that this technique has become a “major avenue of discovery of novel organisms, and in particular, viruses, bacteria and archaea.”

One limitation of this study was that the authors did not isolate the virus in a test tube. That is the next step, Woyke said. To do this, she added, the team’s colleagues at the University of Vienna are returning to the wastewater treatment plant and are testing potential host organisms in the lab.

To some, the debate about the origin of giant viruses is far from settled. However, said Fischer, researchers might benefit from focusing more on how giant viruses work than the “controversial evolutionary scenarios that dominate the debate . . . and detract from other fascinating aspects of their biology.”

“The giant viruses have so many unique features,” he added. “That should fascinate people.”