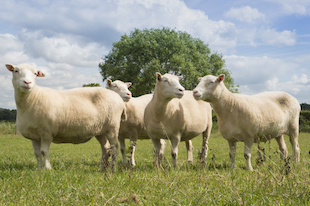 Nottingham DolliesTHE UNIVERSITY OF NOTTINGHAMWhen Dolly the sheep became the world’s first cloned animal, some researchers raised concerns that animals conceived using this technique would suffer health problems as they aged. But new research suggests that animals cloned using somatic cell nuclear transfer (SCNT) age normally. Researchers from the University of Nottingham, U.K, and their colleagues measured the metabolic, cardiac, and musculoskeletal health of 17 cloned sheep aged 7 to 9 years old (including four from the same cell line that gave rise to Dolly), finding that the cloned animals showed no signs of disease related to the SCNT process, they reported today (July 26) in Nature Communications.

The finding “is important . . . because Dolly was under the magnifying glass for a very long time,” Dietrich Egli, a developmental cell biologist at Columbia University who was not involved in the study, told The Scientist....

Nevertheless, “the cloning process itself is still associated with significant risks,” Egli added. Many clones never make it to term, and those that do often struggle to survive after birth. This study shows “those that do make it are fairly normal,” he said.

In 1996, Sir Ian Wilmut, Keith Campbell, and colleagues at the University of Scotland’s Roslin Institute created Dolly by SCNT—transferring the nucleus of a female mammary gland cell to an unfertilized egg cell whose nucleus had been removed. Dolly suffered from osteoarthritis, and died at the age of 6 from a progressive lung disease. Twenty years after Dolly’s birth, SCNT has been used to clone more than 20 mammalian species, including human cells. The technique is one of the most effective ways to reprogram somatic cells into stem cells (as compared with that used to make induced pluripotent stem cells, or iPSCs). However, it’s still inefficient, and many embryos cloned using SCNT don’t survive until birth or long afterward.

Campbell died in 2012, but his longtime colleague Kevin Sinclair of Nottingham and other scientists continued to study the cloned sheep. “We wanted to establish once and for all that cloned animals that survive and [make it] into old age are normal,” Sinclair told The Scientist.

The team has now conducted a thorough health assessment of 17 cloned sheep aged 7 to 9 years old, four of which were generated from the same tissue as Dolly, several years later. The researchers measured the animals’ musculoskeletal health, metabolic health, and blood pressure, comparing them with a group of 5- to 6-year-old non-cloned sheep. Sinclair’s team also conducted magnetic resonance imaging (MRI) scans on the animals’ joints to look for signs of the osteoarthritis that afflicted Dolly.

Like the non-cloned animals, the cloned animals had normal blood sugar, blood pressure, and insulin sensitivity, the researchers found. While the team noted evidence of mild osteoarthritis in some cloned animals (moderate in one case), the sheep did not show any clinical signs of joint disease. The findings suggest that sheep cloned using SCNT appear to age normally, and are at no greater risk of joint disease or other chronic conditions of aging, the researchers reported.

“This study reveals that SCNT can generate relatively healthy sheep that seem to age normally [for the measured parameters],” Patrick Narbonne of the University of Montreal  who was not involved in the work wrote in an email to The Scientist. Nevertheless, Narbonne added, “we have to keep in mind that the vast majority of SCNT embryos die before reaching adulthood due to a variety of defects that seem link to incomplete reprogramming.”

Some previous studies of cloned mice found evidence that the animals were more prone to obesity or early death, but the results were inconsistent. Furthermore, obesity is quite common in mice, Egli noted.

Today, SCNT is primarily used to produce cloned animals for agriculture, or—in the case of human cells—to reprogram the cells into a pluripotent state. Egli and colleagues are interested in using cloned human cells to produce beta cells to treat diabetes, for example.

“We do not need to think about these studies in the context of human cloning because that’s not the intention here,” Egli said. Rather, these latest findings in sheep suggest that “if we make stem cells derived by nuclear transfer, we should be capable to make any cell type of the adult body in a fairly normal way,” he said.

The efficiency of SCNT has improved significantly, but there’s still a long way to go, Sinclair said. “There’s still a concern about embryo loss and neonatal loss” in generating clones with this method, he said, but “those that survive to adulthood for all intents and purposes appear perfectly normal.”