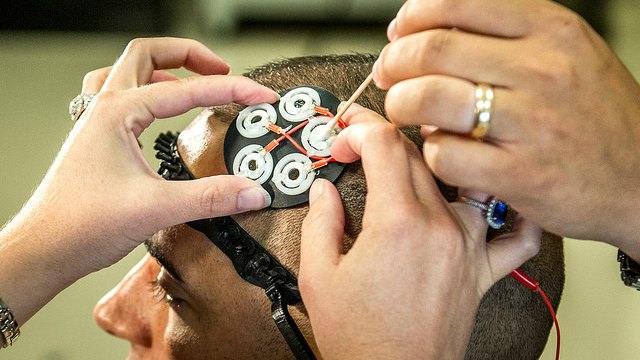 Electrodes used for tDCS are attached the scalp of an individual before he performs a multitasking cognitive test. FLICKR, U.S. AIR FORCE, J.M. EDDINS, JR.Zapping the brain with alternating, low-intensity electricity—a technique called transcranial alternating current stimulation (tACS)—does not appear to boost memory-related brainwaves in humans with epilepsy. The finding, published yesterday (October 31) in Nature Communications, raises questions about how electrical stimulation actually affects the natural rhythms of the brain.

Stimulating the brain with electrodes placed on the scalp has gained popularity in the past two decades, with many people buying DIY kits to buzz their brains at home, expecting it to boost brain rhythms that support making and recalling memories. But hard data on how such brain stimulation works have been hard to come by.

“We were very, very surprised to find that tACS . . . did not affect brain waves,” study coauthor Anli...

University of Birmingham neuroscientist Simon Hanslmayr is not surprised by the results. He is an expert in the role oscillations in brain waves play in complex thought, learning, and memory. Earlier this year, he and colleagues reported the results of experiments in humans that showed that tACS at a specific frequency of wave did not boost individuals’ episodic memories or change the excitability of nerve cells in the motor cortex. The results, his team wrote in its report, raised questions about whether tACS stimulation can cajole the natural brain waves of individuals into a synchronous rhythm to improve cognition as is often claimed by practitioners.

This is the first study to directly examine this issue in humans, and the results suggest that further investigation regarding how tACS may affect neural processing is necessary.—Carmen Westerberg,
Texas State University

Liu’s study follows suit. In the experiments, she and colleagues studied brain activity from its actual surface while tACS was applied. It is the first time this has been done, she says. Most studies look for changes in brain waves from electrodes placed on the scalp. But in the new study, 13 epilepsy patients were undergoing invasive monitoring for surgery and had electrodes placed directly on the brain surface.

The researchers measured the effects of tACS when the patients were sleeping and also when they were awake. They found that the tACS treatment did not synchronize spindles—bursts of oscillatory brain activity—during non–rapid eye movement (non-REM) sleep. And it didn’t do it for theta waves during resting wakefulness, either. It’s those types of changes to brain waves that researchers have connected with memory improvements.

“This is a well thought out and carefully conducted study, and the data clearly support the claim that tACS does not alter the endogenous brain rhythms measured in their study,” Carmen Westerberg, a psychologist at Texas State University, writes in an email to The Scientist. However, she notes, the results are not without limitations. The study was done in patients with epilepsy, which most users don’t have. Also, the team wasn’t able to study the stimulation’s influence on slow-wave activity directly; the researchers had to monitor spindle power, which is coupled to activity, instead. Still, Westerberg says, “this is the first study to directly examine this issue in humans, and the results suggest that further investigation regarding how tACS may affect neural processing is necessary.”

Liu notes a caveat to the study: the negative findings only apply to low-frequency tACS. “We can’t say anything about higher frequencies of tACS applied, or tDCS (transcranial direct current stimulation), which are different protocols,” she says.

In fact, how the stimulation is applied and where it is applied on the head may be key to seeing how the current affects the brain, if at all. For instance, a study published this month in Current Biology showed that tDCS, when applied to the right prefrontal cortex of rhesus macaques, improves the monkeys’ performance on an associative-learning task. Using electrodes implanted directly in the brain, the researchers showed that the firing rates of neurons in the stimulated area did not change, but the stimulation did provoke large, low-frequency oscillations in the underlying tissue. This boosted connectivity among cells, both locally and between distant brain areas. “These long-range changes correlate with tDCS’s effects on behavior,” McGill University neuroscientist Matthew Krause and colleagues write in the paper.

No one really knows how the applied electrical current actually is integrated into the brain. “We are starting to wrap our heads around how this stimulation works,” Krause tells The Scientist. “I wouldn’t rush out to buy a stimulation kit just yet. We’re just trying to convince people it does anything at all.”

Correction (November 3): In the third paragraph, Liu’s affiliation was originally written as New York University, but it is NYU School of Medicine. In the sixth paragraph, we removed mention of slow waves’ relationship to memory for clarification. The Scientist regrets the errors.