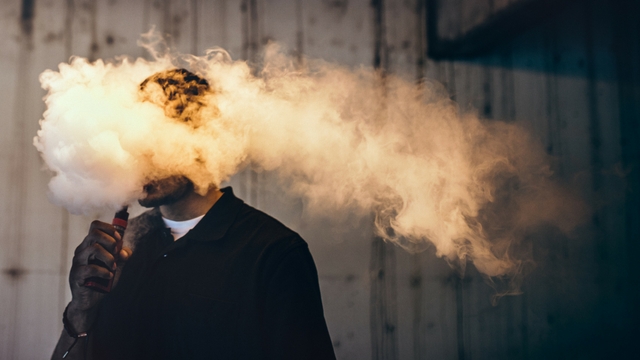 ISTOCK, RYANJLANE Kat Rose of Lakewood, Colorado, started smoking cigarettes when she was 12 years old. Ultimately, it was the smell that drove her to want to ditch the habit. “Constantly, my son was like, ‘Mom, you stink,’” she says. But quitting had been a struggle for Rose, a 30-year-old who works for a metal manufacturing company. She’s allergic to latex and cinnamon (common ingredients in nicotine patches and gum), and prescriptions like Chantix made her sick. Thanks to electronic vaporizers that emit a flavored—coconut cream pie, in Rose’s case—smoke-like cloud, “I haven’t smoked in two years,” she says.

E-cigarettes and vaporizers, devices that turn liquid concoctions into inhalable vapor, have been touted as a panacea for smokers struggling to ditch the habit. These tobacco-less substitutes mimic what it’s like to smoke conventional cigarettes but, according to some experts within the scientific community and the tobacco industry alike, they...

But researchers agree these products are not without health risks, despite messaging by some vapor product companies. One now-banned ad by a U.K.-based e-cigarette company, for example, boasted “Love your lungs”—and was censored by the Advertising Standards Authority for painting the products as healthy.

In reality, scientists are just beginning to study the effects of these vapor products on humans and whether replacing traditional cigarettes with electronic versions makes a difference. Last month at the European Respiratory Society’s International Congress in Milan, Italy, independent research teams presented the results of their investigations into claims of e-cigarette safety and their efficacy as smoking cessation tools, revealing these smoking substitutes are not exactly benign. For instance, in a clinical trial of 15 volunteers, Magnus Lundback of the Karolinska Institute in Stockholm, Sweden, demonstrated that e-cigarettes with nicotine are in fact stiffening users’ arteries, which can lead to heart attack and stroke.

Lundback’s trial is one of the first to assess the health ramifications of e-cigarettes in people, rather than cells or animal models. “[T]he take-home message,” he tells The Scientist, is that “you need to see what happens in the human body before you say anything about this.”

The health effects of vaping

Lundback and his team randomly selected healthy adults who don’t regularly smoke to use e-cigarettes with or without nicotine for 30 minutes. One week later, the volunteers swapped products so that each subject was exposed to both. The researchers found that while blood pressure increased following use of both products, only nicotine-containing vapor caused subjects’ heart rates and measures of arterial stiffness to immediately and significantly rise.

“[Nicotine is] a very potent toxicant, there’s no question about it,” says Lundback. He hypothesizes that e-cigarettes containing nicotine are similar to conventional cigarettes in that chronic exposure to either may lead to permanent vascular changes, though this is not yet apparent from his data. “There are other components in e-cig vapor that may cause health effects,” he adds, including microparticles, metals, and volatile organic compounds.

But these are present in small amounts relative to the primary constituents of e-liquid. Its main ingredients are glycerol and propylene glycol, says Sandra Costigan, principal toxicologist for vaping products at British American Tobacco, in an email to The Scientist. “Some manufacturers also add lower levels of other solvents like water or ethanol to their base formulation. Many contain nicotine and the vast majority contain flavours.” The jury is still out on how glycerol and propylene glycol impact respiratory health, though a recent study demonstrated that contaminant-free, nicotine-free e-cigarettes did not negatively affect pulmonary function in a small number of healthy adults.

In another human study presented in Milan, Linnéa Hedman of Umeå University in Sweden analyzed self-reported responses from about 30,200 Swedish residents and found that common respiratory symptoms—including longstanding cough, phlegm production, and wheezing—were highest in those who used both conventional cigarettes and e-cigarettes. Specifically, Hedman found that 56 percent of dual users reported such complaints, while 46 and 34 percent of people who exclusively used conventional cigarettes or e-cigarettes, respectively, had the symptoms. Among nonsmokers, 26 percent reported respiratory problems. Her data indicate that the use of both products together may have unforeseen consequences.

While none of these studies could address the long-term consequences of e-cigarettes on human health, the data underscore uncertainty among researchers reluctant to climb aboard the e-cigarette bandwagon.

“E-cigarettes are a hot topic,” Hedman says. “Some argue that e-cigarettes are a solution to the tobacco epidemic,” as a safer substitute or crutch for quitting. Others feel they can’t stand behind the product “until we know it’s a safe alternative. Perhaps this is just another threat to public health,” she says.

By and large, scientists agree that conventional cigarettes are worse. “I haven’t met any scientists who say that they think e-cigarettes and tobacco cigarettes are equally harmful,” says Ann McNeill of the National Addiction Centre at King’s College London. “I wouldn’t say they’re safe,” she acknowledges, but “they’re significantly less harmful. . . . It’s the act of burning and breathing smoke that’s uniquely dangerous.”

Lynn Kozlowski of the State University of New York at Buffalo agrees. He says he’s been doing research on cigarette smoking for decades and had pretty much given up hope that a safer smoking alternative was possible until “e-cigarettes came along.” While he says they’re “almost certainly not safe” and acknowledges that scientists may not yet have all of the answers, he stresses that vaping is “undoubtedly” less harmful than smoking.

You get a nice big cloud instead of these tiny little puffs. I like breathing like a dragon.—Rose,
"Box mod" user

This distinction doesn’t always come across to consumers. “They say that smoking is bad, they say that vaping is bad. I think they’re all on crack; [the companies] just want to make money,” says 52-year-old Lakewood native Bob Moyer, a smoker for the past 41 years. He began vaping six years ago after he decided to cut back on cigarettes to save money. Now, he vapes more than he smokes—black honey tobacco flavor is his e-liquid of choice—but says he doesn’t notice any health benefits from cutting back on cigarettes.

According to Kozlowski, communicating the differences in health risk between conventional smoking and vaping is key to helping consumers make informed decisions. “It’s important for people to have access to information that’s as accurate as we can make it about differential risk,” he says. “When you have someone—a kid—who is exploring the use of both [e-cigarettes and conventional cigarettes] and they get the message that . . . this stuff is just as bad as cigarettes, that’s a tragic message.”

But marketing e-cigs as not as bad as regular cigarettes might distract from their harms, says Lundback. “E-cigarette marketing campaigns don’t always target smokers,” Lundback says. “They target the very young and they target people [who are] not smoking.”

The US Food and Drug Administration (FDA) seems to agree. Last year, in an effort to deter young people, the FDA effectively banned the sale of e-cigarettes to adolescents 18 years and under.

But Kozlowski says any worry that vaping may be a gateway into smoking “is kind of a dumb concern,” given available data. In a review published earlier this summer, he and coauthor Kenneth Warner of the University of Michigan School of Public Health found little evidence that young people who try e-cigarettes go on to engage in substantial levels of conventional cigarette smoking. “It’s not that people who tried e-cigarettes move on to be pack-a-day smokers in the next six months. It’s that they may have had a few cigarettes in the past six months,” Kozlowski says. “We don’t worry about people who have had a cigarette cross their lips.”

McNeill finds similar trends in her own data from the U.K. “Experimentation with e-cigarettes is indeed increasing,” she acknowledges, in that kids just tend to try it, and then stop. “But regular use of e-cigarettes is low and largely confined to children who are already smoking,” as she and her colleagues recently demonstrated.

Another point of contention in the vaping debate is whether these products can actually help smokers curb their habit.

There is empirical evidence that e-cigarettes can indeed aid with quitting, McNeill says. An updated Cochrane review published last year combined evidence from two randomized trials totaling 662 people and demonstrated that e-cigarettes with nicotine effectively help smokers kick the habit compared with no assistance. But the authors noted that given the small sample size, more studies are needed to confirm this effect.

In Hedman’s survey, the greatest proportion of individuals who use e-cigarettes are dual users—those who also smoke conventional cigarettes. She also argues that if e-cigarettes helped with smoking cessation, then “e-cigarette use would have been most common among former smokers in our 30,000 participants. But no, it was most common among the smokers.”

While she acknowledges that her survey didn’t investigate possible explanations for this pattern, she conjectures that perhaps smokers are supplementing their use of conventional products in an effort to skirt smoking bans. “In Sweden, e-cigarettes are not included in tobacco law, and you can smoke them in restaurants and bars . . . environments where cigarettes are prohibited.”

We’re also finding large numbers of people who are former smokers who are also former vapers—they’re off of both.—Kenneth Warner,
University of Michigan School of Public Health

But the prevalence of e-cigarettes among smokers could also mean that they’re trying to use these products to quit smoking, McNeill points out. According to her observations, there will be a period of overlap before users reach their quitting goals.

From her own work, McNeill has found that successfully quitting smoking depends on the frequency of use. “They’re not a magic bullet—you don’t just pick one up, and suddenly you don’t want to smoke anymore,” says McNeill. “As a whole, people need to persevere with these products. They need to find a product that suits them . . . there’s a period of trial and error.”

Rose experienced such a period when she made the switch, initially trying the pen-like vaporizers—the ones that look like cigarettes—before switching to the larger, battery-powered devices called box mods. “You get a nice big cloud instead of these tiny little puffs,” says Rose, explaining why she prefers the more-powerful box mods. “I like breathing like a dragon,” she says with a chuckle.

Rose’s story is a familiar one for Paul Dakan, an employee of the Lakewood, Colorado, e-cigarette lounge Vapor Leaf. Dakan himself swapped his two-packs-per-day habit for vaping four years ago, and describes the process as relatively easy but dependent upon finding “the right system.” Now, he uses a variety of devices and flavors, often switching throughout the day, and is currently partial to a mix of vanilla, butternut, and hazelnut.

McNeill also says consistency is key; people have to use vapor products regularly and for sustained periods of time to eventually replace smoking, and their efficacy can also depend on what she calls the regulatory environment. For instance, in places such as Australia and Canada where the products are strictly regulated by the government, McNeill found that e-cigarettes were less effective in curbing conventional smoking.

Warner says recent data support e-cigarettes as successful smoking cessation tools. “We now have these studies that are finding that at the population level, you can see a change in the aggregate level of quitting [smoking]” since vaping became more common, he says. In addition, the number of dual users in the U.S. is declining, while vaping in former smokers is on the rise. “We’re also finding large numbers of people who are former smokers who are also former vapers—they’re off of both.”

McNeill, Warner, and Kozlowski fear, though, that skeptics hold more sway over public discourse. “[U]nfortunately, what’s getting on the front pages of our media is every study that has any potential negative effect,” says McNeill. “The fact that 200 people in England die every day because of smoking doesn’t get on the front pages . . . we have to find every tool possible to help people to stop smoking.”