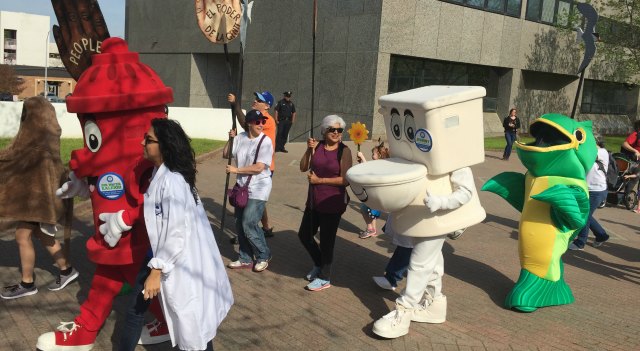 The turnout is “pretty good,” considering that it had to compete with the Cherry Blossom festival in the capitol, says Belicia Debose, a marcher from Hampton Roads, VA, who works at a children’s hospital. She participated out of concerns for climate change, national parks, and STEM education. “With the current administration I just wanted to be around like-minded people . . . and support the causes I align with.”

Although they are billed as non-partisan, the events are not devoid of politics—either on signs or in rhetoric. At the Rally for Science in Chicago, for instance, democratic gubernatorial candidate J.B. Pritzker worked the crowd. “It’s a shame that in 2018 we still have to have a march” for science, he tells The Scientist.

See “Scenes from the 2018 March for Science”

A march around the world 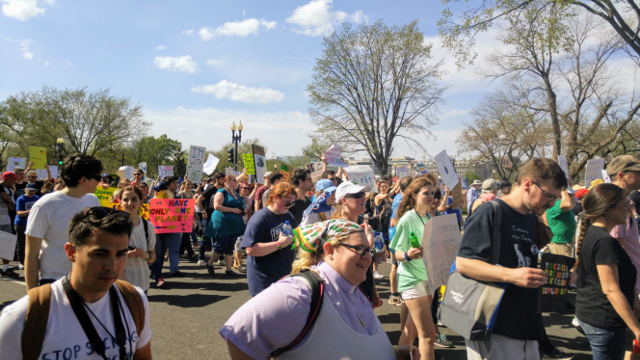 Although the turnout for today’s marches was smaller than last year’s, the March for Science movement nevertheless has galvanized the scientific community to organize and speak up.

“There’s been nothing like it in the lifetime of any working scientist,” Rush Holt, the CEO of the American Association for the Advancement of Science, told The Scientist earlier this week. “It is a remarkable outpouring of scientists to talk about the marvelous accomplishments of science, the amazing relevance of science, and a call for defending the conditions under which science can thrive.”

It seems absurd to come out for a march for science. It’s like a march for breathing.—Brian Malow,
science comedian

That outpouring reverberated around the globe. This year, events took place from Scandinavia to South America and everywhere in between.

In sunny Raleigh this morning, about 100 people turned out at the Halifax Mall across the street from the North Carolina General Assembly building (more than 500 marchers attended last year). After a children’s march, speakers took to the stage, including Brian Malow, a science comedian. “Art is not just for artists. Music is not just for musicians, and science is not just for scientists,” he told a cheering crowd. “Science is for everyone.”

That message shaped the theme of Raleigh’s march, which was: Science for everyone. Everyone for science. “It seems absurd to come out for a march for science. It’s like a march for breathing. . . . But we do,” Malow said.

In Chicago, this year’s march morphed into a much-downsized rally at the Field Museum of Natural History. The event moved indoors as chilly rains spit down upon the city. In the museum’s great hall, several thousand attendees spoke one-on-one with scientists from the museum, local universities, and science advocacy organizations, or wrote postcards to the Environmental Protection Agency and the National Science Foundation. Noah Cruikshank, the Field Museum’s adult engagement manager, says that organizers wanted to make it easy for attendees to “take the next step” and engage government about supporting science. “So that’s where the postcard writing campaign came in. Last year we marched, this year we speak up,” he says. 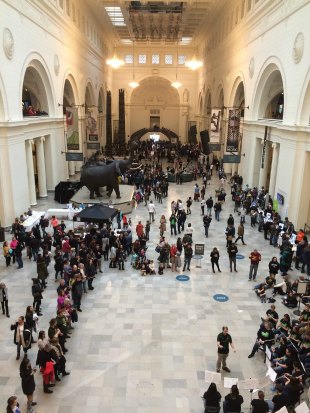 Rally for Science at the Field Museum in Chicago, 2018JIM DALEYThe march movement is more than two Saturdays in 2017 and 2018, according to Lucky Tran, a March for Science organizer and media relations officer at Columbia University. In the past year, for instance, the March for Science was involved in helping graduate students stage a walk-out to protest a proposed tax on tuition waivers, and it lobbied against proposed curriculum changes in New Mexico that would have removed climate change references from science classrooms.

Continued enthusiasm by science supporters to attend these events is a sign that the movement isn’t dying out. “Last year was historic,” Tran says, “and this is a sign of our persistence.”

Holt says he hasn’t yet seen the science community’s activism effect the sorts of changes people are marching for. “It’s hard to know whether the march is turning anything around with respect to the concerns that scientists have about scientific advisory councils or appointed science advisors or evidence-based policymaking,” he says. “But over time, I’m pretty sure that this newfound willingness to go public will produce benefits in those areas, in policymaking and legislation and environmental regulation and so forth.”