Hanging in front of the abdomen like an apron, the depot of visceral fat known as the omentum helps regulate immune responses.

Fat is a loaded tissue. Not only is it considered unsightly, the excess flab that plagues more than two-thirds of adults in America is associated with many well-documented health problems. In fact, obesity (defined as having a body mass index of 30 or more) is a comorbidity for almost every other type of disease. But, demonized as all body fat is, deep belly fat known as visceral adipose tissue (VAT) also has a good side: it’s a critical component of the body’s immune system.

VAT is home to many cells of both the innate and adaptive immune systems. These cells influence adipocyte biology and metabolism, and in turn, adipocytes regulate the functions of the immune cells and provide energy for their activities. Moreover, the adipocytes themselves produce antimicrobial peptides, proinflammatory cytokines, and adipokines that together act to combat infection, modify the function of...

Unfortunately, obesity disrupts both the endocrine and immune functions of VAT, thereby promoting inflammation and tissue damage that can lead to diabetes or inflammatory bowel disease. As researchers continue to piece together the complex connections between immunity, gut microbes, and adipose tissues, including the large deposit of fat in the abdomen known as the omentum, they hope not only to gain an understanding of how fat and immunity are linked, but to also develop fat-targeted therapeutics that can moderate the consequences of infectious and inflammatory diseases.

The omentum’s role in immunity

The omentum, a term derived from the Latin word for apron or cover, is a fold of fat that hangs below the stomach and covers the intestines. (See illustration on right.) Found in all people, even the most lean, the omentum is actually an independent organ. Hints about its functions (other than fat storage) exist in the early scientific literature. For example, after observing numerous cases in which the omentum adhered to ulcers of the gall bladder, stomach, and intestine; surrounded inflamed ovaries or ruptured appendices; and successfully plugged a hole in the diaphragm, a pioneering British surgeon at the turn of the 20th century referred to it as the “abdominal policeman.”1

Researchers continue to piece together the complex connections between immu­nity, gut microbes, and adipose tissues.

Consistent with this conclusion, we now know that the omentum supports the generation of blood vessels and fibrous connective tissue that can help repair damaged organs, and also promotes immune responses to fight infection. Many of the immune cells that reside within the omentum are found in aggregates termed fat-associated lymphoid clusters, or “milky spots” for their whitish appearance amidst the yellow fat. (See image on page 48.) In many ways, milky spots are analogous to lymph nodes—the small bean-shape organs that filter excess fluid from peripheral organs such as the skin, muscle, liver, and lungs. Milky spots, similarly, filter the fluid that flows from the abdominal cavity. The clusters of immune cells in both milky spots and lymph nodes sense microbes, damaged cells, and inflammatory mediators and initiate appropriate immune responses.

Despite their analogous functions, milky spots and lymph nodes have very distinct populations of leukocytes. For example, the antibody-producing B cells in milky spots and lymph nodes develop from different progenitors and have unique repertoires of antigen receptors. In particular, B cells in milky spots are associated with T cell–independent responses to bacterial and carbohydrate antigens, and often differentiate into IgA-producing cells that react with commensal bacteria in the intestine.2 Given that the omentum frequently adheres to ruptures in the intestine or appendix, it is likely that it helps defend against commensal organisms that might spill into the abdominal cavity after injury.

Like B cells, macrophages in the omentum also appear to tailor their activities to protect the host from bacteria that might escape the intestine. Studies from Ruslan Medzhitov’s lab at Yale University show that these macrophages produce the transcription factor GATA6, which is regulated by retinoic acid, a metabolite generated from vitamin A by enzymes that are abundant in the omentum.3 Peritoneal macrophages from mice fed a vitamin A–deficient diet do not produce GATA6 and consequently fail to make transforming growth factor–β (TGF–β), a cytokine that stimulates B cells to produce IgA in response to gut microbiota. Similarly, mice with a genetic deletion of GATA6 in macrophages also fail to make TGF–β and IgA.

Meanwhile, T cells in the omentum produce a greater variety and higher amounts of infection-fighting cytokines than their counterparts in other parts of the body. Last year, Yasmine Belkaid of the National Institute of Allergy and Infectious Diseases and colleagues showed that VAT-resident memory CD8+ T cells in mice respond more quickly to an infection than memory cells at other sites.4 The rapid response, the researchers found, was due to an altered cellular metabolism in these T cells, characterized by the increased uptake of fatty acids and elevated mitochondrial function. Given that fatty acids and glycerol are major products of adipocytes, fat-resident memory CD8+ T cells are likely taking advantage of the metabolic resources in adipose tissues for both their maintenance and their ability to defend against pathogens.

Importantly, the interactions between T cells and adipocytes go in both directions: recently activated T cells trigger adipocytes to reduce the expression of genes involved in lipid biosynthesis and instead produce antimicrobial peptides. This transient shutdown of lipid metabolism in favor of antimicrobial function is likely a two-pronged mechanism for limiting pathogen growth and facilitating antimicrobial immunity. 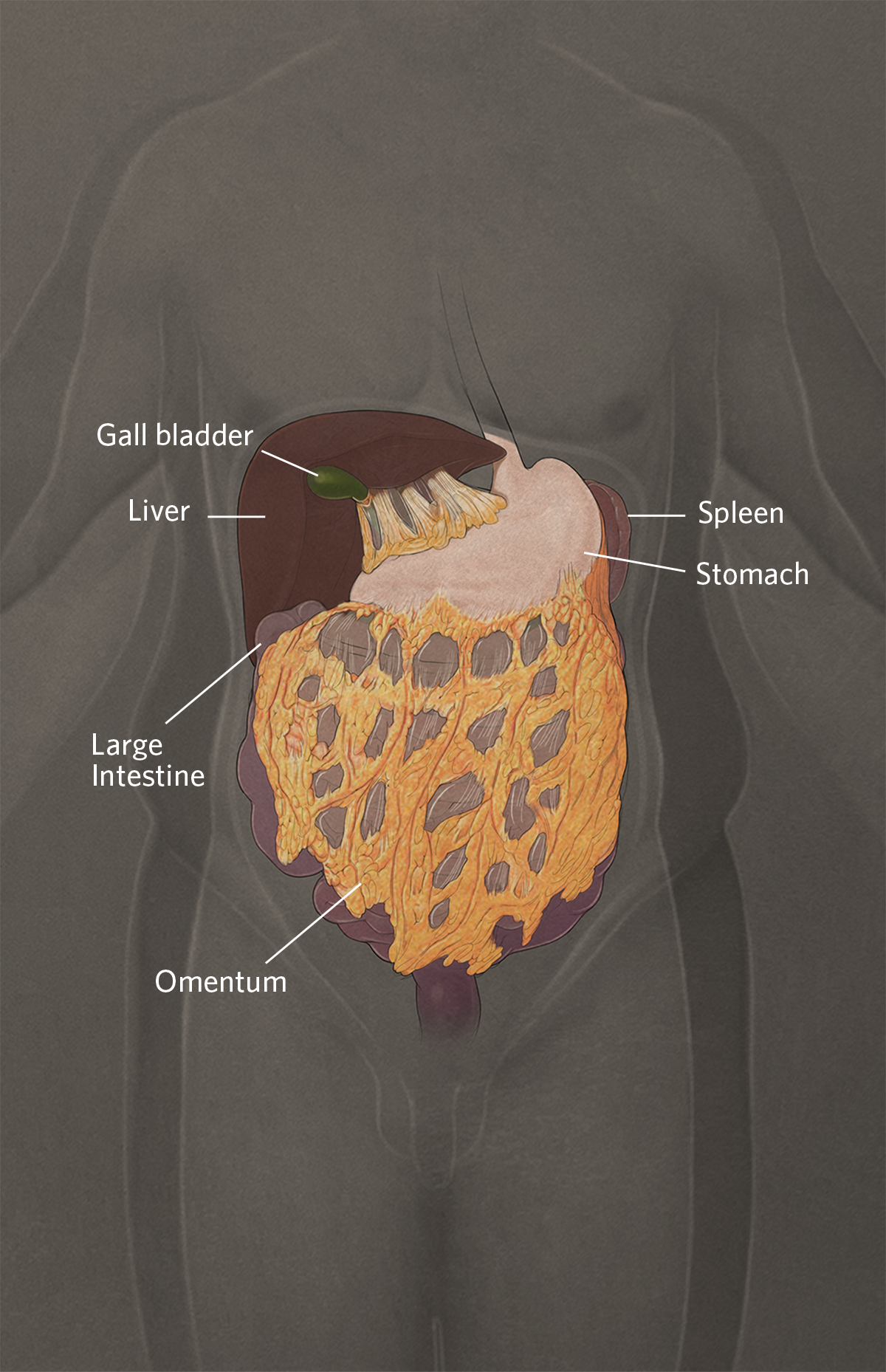 ANATOMY OF THE OMENTUM: The body’s main deposit of abdominal fat hangs like an apron over the organs of the abdomen. This adipose tissue plays important immune roles, but can also serve as a source of chronic inflammation in obese individuals, possibly contributing to metabolic syndrome. The omentum is also a common site of ovarian cancer metastasis. See full infographic: WEB | PDF
© catherine delphia

The downside of fat’s T cells

Unfortunately, T cell activation in adipose tissue isn’t always so helpful. In a series of studies examining the link between immune-driven inflammation and insulin resistance in diet-induced obesity, Satoshi Nishimura and colleagues at the University of Tokyo reported that CD8+ memory T cells in the VAT of mice fed a high-fat diet became chronically activated and produced inflammatory chemokines and cytokines, which recruited macrophages that further aggravate inflammation and tissue damage.5

Inflammatory T helper (Th1) cells and antibody-producing B cells also accumulate in the VAT of obese mice and contribute to metabolic dysfunction.6,7 Like CD8+ T cells, Th1 cells make inflammatory cytokines that activate local macrophages. Moreover, they promote the differentiation of B cells into antibody-secreting cells. In the case of diet-induced obesity, VAT-associated B cells often produce antibodies that, rather than binding to viruses or bacteria, latch on to adipocytes and other cells, including the insulin-producing β cells of the pancreas. This causes tissue damage that can ultimately lead to diabetes or other inflammatory diseases.

At the same time that inflammatory pathways are overly exuberant, immuno-inhibitory mechanisms may also be dysfunctional. A recent series of papers from the lab of Diane Mathis at Harvard University defined a unique population of regulatory T cells (Tregs) that reside in the VAT.8,9 Obese mice lacking VAT-associated Tregs became insulin resistant more easily and exhibited increased adipose inflammation, the researchers showed. In contrast, obese mice given the diabetes drug pioglitazone had improved insulin sensitivity and lowered blood sugar, due in part to increasing numbers and suppressive activity of VAT-associated Tregs.

The omentum’s immune functions can also be subverted by malignancy, particularly ovarian carcinoma, which often metastasizes to the omentum. The same filtering activity that allows milky spots to detect pathogens also facilitates the collection and colonization of detached tumor cells floating in the abdominal fluid.12 This activity is easily observed in mice following an injection of tumor cell suspensions: within hours, milky spots take up tumor cells, which grow into visible colonies within days. Because of this risk, surgeons often resect most or all of the omentum in the context of human ovarian cancer to eliminate as much metastatic disease as possible.

Cells residing in the omentum likely take advantage of the met­abolic resources in adipose tissues.

Researchers have long thought the high rate of metastasis in the omentum was due solely to the passive collection of tumor cells, but recent data from the laboratory of Anil Sood at MD Anderson Cancer Center are starting to upend this assumption. Sood and colleagues showed that the omentum is uniquely supportive of ovarian tumor growth, regardless of how the metastasizing cells get there.13 Using a technique called parabiosis, in which mice are surgically paired side by side so that they have a common circulation, the researchers found that ovarian tumor cells can metastasize through the bloodstream from one mouse to the other. Despite initially lodging in the lungs, liver, and spleen, however, the cells only formed metastatic tumors in the omentum.

Tumor cells’ ability to thrive in the omentum reflects a critical interaction with adipocytes, which transfer lipids to the cancerous cells. Visualizing fluorescently labeled lipids using microscopy, researchers observed the depletion of lipids from adipocytes and the accumulation of lipids in tumor cells, suggesting a direct transfer.14 Tumor cells in the omentum also alter their cellular metabolism in favor of oxidizing fatty acids, as these molecules are abundant in adipose tissues such as the omentum. This metabolic switch is similar to that observed in VAT-resident T cells and is likely a common theme among cells that reside in belly fat.

In addition to altering their metabolic program, tumor cells that metastasize to the omentum upregulate (or are selected for) the production of HER3 (human epidermal growth factor receptor 3). The omentum is a rich source of neuroregulin, the ligand for HER3, which facilitates metastasis and colonization.13 In fact, therapeutic disruption of this pathway in mice reduces metastasis to the omentum and impairs tumor growth.

Despite the omentum’s role in promoting the growth of ovarian tumors, it also has the cell types and lymphoid architecture to initiate antitumor immune responses. For instance, the presence of tumor infiltrating lymphocytes (TILs), particularly CD8+ T cells, positively correlates with overall survival in women with ovarian cancer, whereas the presence of immunosuppressive Tregs is associated with rapid tumor progression and accelerated mortality.15 A better understanding of how immunity is regulated in the omentum should allow us to tap into these processes to eliminate malignant cells and improve the notoriously poor outcomes for women with metastatic ovarian cancer.

Selene Meza-Perez and Troy D. Randall are researchers in the Department of Medicine, Division of Clinical Immunology and Rheumatology, at the University of Alabama at Birmingham.