Modified from © iSTOCK.COM; tHE scientist STAFF

Cancer therapy turned a corner when physicians started enlisting patients’ own immune systems to kill tumor cells. Since 2011, the FDA has approved six drugs targeting proteins that act as off switches for the immune system. Deactivating them allows the immune system to roar to life and fight cancer cells.

These therapies can sometimes treat melanomas, cancers of the lung, kidneys, bladder, head and neck, as well as Hodgkin’s lymphoma. And when they work, they are near-miraculous. Yet for most patients, the drugs don’t have an effect, or cancer eventually returns. Cancer, it turns out, can develop resistance to this ramped-up immune attack. Scientists are just beginning to grasp the multitude of strategies cancer can use to thwart immunotherapies.

“With immunotherapy, you’re really impacting the immune system rather than the disease itself,” says Sacha Gnjatic, an immunologist at the Icahn School of...

The immune system deploys a dizzy­ing array of cells and signaling molecules to discriminate self from nonself. Understanding that complexity requires an equally expansive set of tools.

The Scientist asked four researchers about their approaches to studying how cancers resist immunotherapy.

Challenge: PD-1 proteins on the surface of T cells prevent immune cells from attacking cancer cells. Cancer cells themselves, like many normal cells, are also protected by PD-L1, a “pass me by” signal. Anti-PD-1 immunotherapy, one of the two kinds of approved so-called checkpoint inhibitor therapies, blocks this pathway, allowing T cells to destroy some types of cancer cells. Not all cancers in all patients respond. In those that do, diseased cells can acquire the ability to circumvent the immune activation sparked by anti-PD-1 drugs. To avoid this resistance to a single immunotherapy, researchers and clinicians combine therapies. “If we can target a second pathway through combination therapy, that can increase the proportion of cancers that will respond and patients we can help,” says Teng. However, it’s hard to know which therapies can be combined effectively without giving rise to toxic side effects, ranging from rashes to diarrhea to liver damage.

If we can target a second pathway through combination therapy, that can increase the proportion of cancers that will respond and patients we can help.

Solution: Test new drug combinations in multiple mouse models. Teng uses a tiered approach that relies on three different kinds of mouse models and targets several different immune-modulating pathways, including the pathway that involves PD-1 and another immune checkpoint called TIGIT, which also regulates the function of T cells. The first mouse model is a transplanted tumor model. This involves injecting cells from a human cancer cell line into the flanks of immunologically compromised mice and testing treatments on the tumor that grows. Transplanted tumor mouse models are easy to use: the tumors grow quickly and reach a treatable size within the same time frame across multiple animals. However, only a few human tumor cell lines developed for this approach metastasize in mice. So for the second tier, Teng uses a human breast cancer cell line that she can inject into a mouse’s mammary fat pad. This cancer spreads to the mouse’s liver and lungs within weeks. If the treatment helps these mice survive after metastasis, Teng moves it to the third tier, where she induces cancer in mice using a carcinogen. Increasingly, journals and pharmaceutical companies want to see a new treatment’s efficacy in more than one mouse model to be convinced, Teng says.

Expert Advice: Cell-culture methods for the first two tiers must be impeccable. Teng suggests freezing batches of tumor cells from early stages of culture so that you have a reservoir of original cell stock in case of culture contamination by mycoplasma bacteria, or gene expression alterations that commonly crop up after keeping cells in culture for too long.

WRENCH IN THE WORKS: The checkpoint protein PD-1 sits on the surface of T cells, where it can recognize and bind to the protein PD-L1 in the cells it encounters. The interaction between the two checkpoint proteins inactivates the T cell. When PD-L1 is on a healthy cell, this interaction helps prevent autoimmune responses. But cancer cells also express PD-L1. Checkpoint inhibitors such as anti-PD-1 or anti-PD-L1 prevent the two proteins from interacting. The T-cell thus remains active and able to destroy the cancer cell.
THE SCIENTIST STAFF

Challenge: Human tumors tend to be much more diverse both across and within patients than they are in mice. This heterogeneity is key to cancers’ ability to develop immunotherapy resistance.

Solution: Use human tumor samples rather than mouse models. Coukos and his team obtain surgically resected human tumors and break them up into single cells, so that they can suspend them in culture and test new drugs. With the ability to monitor how the tumor cells respond to treatment with anti-PD-1 or anti-PD-L1 therapies, the group can untangle the difference between cancer that responds to immunotherapy and cancer that doesn’t, or that develops resistance. They suspect that boosting production of colony-stimulating factor 1, a molecule that encourages the proliferation and survival of white blood cells called macrophages, could help certain melanomas respond better to anti-PD-1 and anti-PD-L1 therapy.

Keeping the sample fresh for this work is important. Coukos aims to avoid keeping any tissue outside a culture medium for longer than 20 minutes. “Each sample that you study is a little different,” he says. “That allows you then to cover the entire variation in the human tumor.” Rather than culturing pieces of the tumors, he mixes up all the cells and distributes them across the wells of a culture plate. In this way, each well contains some of each type of cell present in the tumor. This step helps distribute the heterogeneity of the tumor across the entire experimental setup, making it easier to tease out patterns in treatment responses.

Expert Advice: Be adaptable with your methods. The experimental design may need tweaks to account for the variation present in each tumor sample. You’ll also have to balance the number of cells in each well and the number of experimental variables in a given experiment. Depending on the research question, those values may have to change to keep variation and cancer cell heterogeneity low enough across the wells to give interpretable results.

It’s taken us a long time to persuade ourselves that the robots are better than us, but it’s true.

Challenge: Cancer cells and immune cells aren’t the only players in the immunotherapy game. Many small molecules and proteins act as signals that tell the immune system when and where to attack. These molecules cannot be amplified the way genes can using polymerase chain reaction methods, so the relative ease of gene expression analysis does not translate to protein analysis. Since samples of human tissue are hard to obtain and typically small, researchers need innovative methods to study proteins and other signaling molecules that change in response to immunotherapy.

Solution: Search for the small molecules in blood and fluids surrounding the tumor. Lill works with several techniques that profile proteins and other molecules involved in the immune response. “Mass spectrometry is a very effective tool for visualizing these molecules, quantifying them, and saying how they’re actually changing in response to the immunotherapeutic approach that we’re taking,” Lill says. Mass spectrometry involves ionizing molecules, separating them based on their electrical charge, and detecting their components based on that separation. A major class of molecules Lill analyzes are cytokines, small signaling proteins that regulate the immune system. To streamline work and make sure her findings are reproducible, Lill also automates as much of the process as possible—such as isolating and purifying the peptides and loading them into the mass spectrometer. “It’s taken us a long time to persuade ourselves that the robots are better than us, but it’s true,” she says.

Expert Advice: Choose your analysis software carefully when working with the immune system. During an immune response, some cytokines are cleaved, so the difference before and after treatment with an immunotherapy drug is obvious. But other cytokines may gain or lose only a couple of peptides. These slightly modified cytokines can look very similar in mass spectrometry readouts, posing a challenge during analysis. Lill recommends using PEAKS, a software package that can distinguish between similar cytokines. 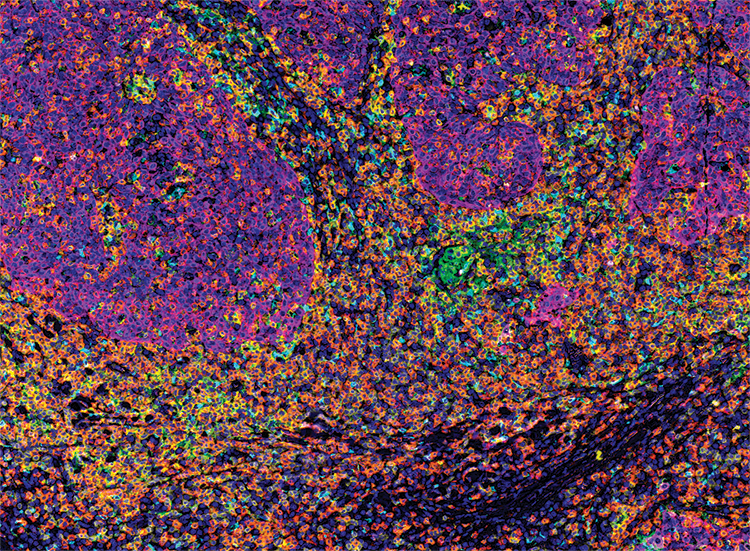 Challenge: Many techniques in biomedical science require an abundance of financial resources, technical expertise, and massive, expensive instruments. Cutting-edge techniques such as single-cell genomic profiling, which researchers use to analyze the active genes in thousands of individual cells at a time, remain out of reach for many scientists and clinicians.

Solution: Unite with other centers and pool resources. Mount Sinai’s Human Immune Monitoring Center is one of four laboratories in a network funded by the National Cancer Institute to discover biomarkers for cancer immunotherapy. Researchers at each of the centers collect and analyze samples from patients enrolled in clinical trials. The centers each contribute their own technical expertise and instrumentation, and samples are sent to other centers for additional analysis on shared instruments. To understand how anti-PD-1 drugs interact with cancer cells, the researchers seek to profile how populations of immune cells change in the tumor and the surrounding microenvironment after therapy. They also look at the genes involved in orchestrating this response. A tumor sample may go to Mount Sinai to run on a mass cytometer so researchers can measure the proportions of different immune cell populations present. Analysis of gene expression patterns, among other assays, happens at Dana-Farber Cancer Institute and MD Anderson Cancer Center. Stanford University handles the analysis of epigenetic markers such as methyl groups, which can alter gene expression without changing the underlying DNA.

Expert Advice: Seek out centers or other labs that can aid with the most challenging assays. The Human Immune Monitoring Center’s website lists its available assays and services, including study design and consultation. In the next five years, the NCI-funded collaboration will create a publicly available data commons for cancer immune profiling that will include data standards for cancer immunological assays, a data repository, and data visualization tools. “People will have access to our data and be able to look for things we may not have thought about,” Gnjatic says.