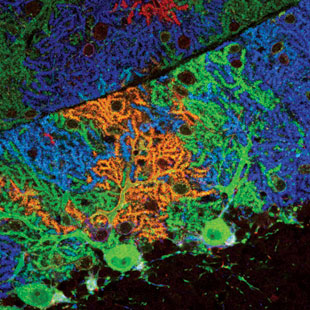 THE BRAIN AGLOW: This image shows a section of mouse cerebellum labeled using the Brainbow3 technique in which fluorescent markers are randomly expressed in membranes of cells. Purkinje cell bodies (green), sprouting their typically dense, tree-like dendrites, are surrounded by several inhibitory basket cell neurons (white arrows).COURTESY OF D. CAI, JR SANES, JW LICHTMAN HARVARD U.How are all the neurons in the brain connected? Large initiatives in the U.S. and Europe have been pouring tens of millions of dollars into answering this question. What’s driving the effort to create comprehensive maps of neuronal connections is the hope that scientists will be able to glean from them the physical basis of perceptions and behaviors—and to develop anatomical signatures of brain disorders.

In the past few years, new strategies harnessing immunolabeling and genetic and molecular engineering in mice are helping researchers get around resolution bottlenecks in light microscopy. Moreover, recently developed tools to optically clear brain tissue have potential to enhance studies of synaptic connectivity. The Scientist spoke with developers about these methods, and here’s what they said.

Overview: First introduced in 2007 by Jeff Lichtman, Joshua Sanes, and their colleagues at Harvard University, Brainbow works by inserting a handful of genes for XFPs (fluorescent proteins) inside a transgene. In each neuron, a different ratio of XFPs is randomly expressed through genetic engineering to make at least 100 different colors of cells.

The technology has been successfully used to visualize the nervous systems of fish and flies. In May, developers released Brainbow3, an improved version that is optimized for mammalian brain tissue.

In Brainbow3, among other improvements, the colors are expressed in the membranes of the cells rather than in the cytoplasm, an advance that keeps the fluorescence intensity more consistent across different-size cells. The XFPs now come from a variety of marine animals and are structurally different enough so that it is possible to make primary antibodies for each of them to enhance the colors.

Learning curve: It takes about three to six months for most newcomers to get publication-quality images, Lichtman says. “If someone’s experienced [with confocal imaging], their very first animal could be really satisfying. If it’s a new student who’s never imaged before, they’ve got a lot to learn. It’s worth the effort.”

Advantages: If you want to be able to label every neuron a different color but don’t need to distinguish different cell types, this is the perfect technique, Lichtman says. (The group has published some strategies for labeling inhibitory and excitatory neurons, but those are a bit more technically challenging.) Brainbow also allows you to easily find long-range projections in dense tissue. And because the colors of each cell remain stable, the strategy works well for developmental studies.

Caveats: Using light microscopy—which has a resolution limit of about 250 nm—it’s not quite possible to resolve individual synapses definitively with Brainbow, especially in densely labeled tissue. Lichtman and his colleagues are trying to combine the method with imaging techniques, such as structured illumination, which can yield a twofold increase in resolution. Pairing Brainbow with techniques that promise an even higher resolution still poses a challenge.

Be aware, too, that if you’re hoping to do Brainbow imaging in a particular mouse, you’ll need to create a triple mutant, which is costly and complicated. To help overcome this challenge, Lichtman has introduced a virus carrying the constructs. This can also help researchers control where and when in development the XFPs are expressed.

Tip: Because the technique takes microscopy to its limits in terms of resolving different colors, the key to success is to more deeply understand how your microscope works and its limitations. The images you take with each of the color channels will be superimposed—and they should be aligned in both the lateral and depth directions, says Lichtman. “That’s asking a lot of a microscope,” he adds. The latest publication on Brainbow includes tips on generating high-quality images (Nature Methods, 10:540-47, 2013).

Cost: Brainbow3 mice currently cost about $230 apiece. The virus construct is available through Addgene for $65. You’ll need access to a confocal microscope, and you might consider paying for expert imaging help at a core facility.

Overview: Array tomography—digital assembly of three-dimensional images of tissue from an array of serial tissue sections—relies on the slicing of ultrathin sections (50–200 nm) to circumvent the resolution limits imposed by light microscopy. First described in 2007, with an improved and advanced sample prep protocol published in 2010, array tomography allows you to resolve individual synapses using conventional light microscopy (Neuron, 68:639-53, 2010).

In array tomography, you embed tiny blocks of fixed tissue (~1 mm3) in resin, slice them using an ultramicrotome, and attach the resulting ribbons of serial sections to a coated coverslip. You can stain neurons using three antibodies at a time, remove those antibodies, add another set of three antibodies, and repeat. The method’s developers, Kristina Micheva and Stephen Smith at Stanford University, routinely repeat the process up to 10 times, producing images with 12–36 different markers. 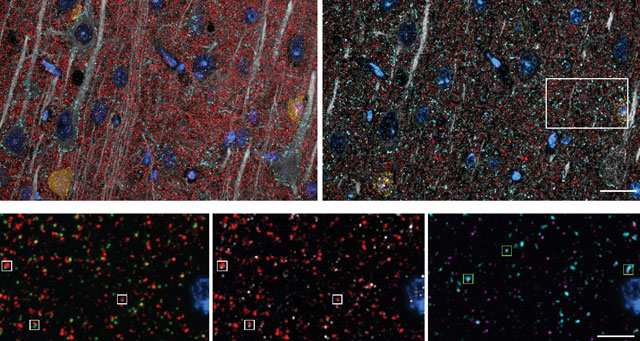 Learning curve: If you’ve processed tissue for electron microscopy before, and you use antibodies known to work, then you can probably generate usable images within a week. Creating the arrays—cutting and attaching the ribbons of thin sections to a slide—is the most technically challenging step and takes at least a month to master because it requires a fine touch, Micheva says.

Advantages: Array tomography allows you to look at the expression of many different proteins or fluorescent molecules within the same cellular substructure. Also, because the technique uses light microscopy, it’s easier, cheaper, and quicker to image relatively large volumes of tissue than with electron microscopy (EM), although EM yields the highest level of resolution.

Caveats: Because the tissue sections are cut extremely thin, it’s also possible to look at your samples using EM. However, in such cases the tissue preparation protocol gets more complicated. “This is because preparing the tissue in a way to have good antigenicity and good ultrastructure for EM is not trivial,” Micheva says. You can work with a more limited number of antibodies—10 or fewer—if you’re combining the techniques, and Micheva, Smith, and their collaborators have developed a new method that makes it possible to add more antibodies.

Tips: If you’re a beginner, give yourself time to get comfortable with the methods, which have been published in detail (Cold Spring Harb Protoc, November 2010). To get a feeling for how your sample should look, follow the protocol exactly before you introduce any changes, and test with antibodies that have already been used with the method, Micheva says. If you are not sure whether you want to invest time in the technique, you can outsource the slicing or other steps to a university core facility. Micheva and Smith cofounded Aratome in Menlo Park, California, which also provides these services.

Cost: The major expenses are a light microscope, preferably with some automation, an ultramicrotome, and a diamond knife. Primary antibodies run around $300–$400 each, secondary antibodies cost about $100 each, and the cost of mounting media and resins should also be taken into consideration. 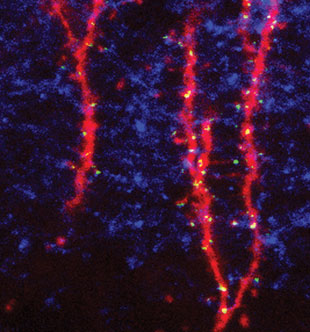 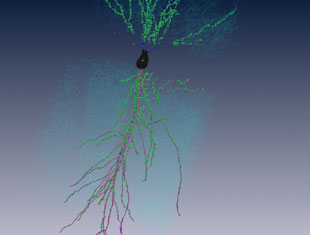 SEEING SYNAPSES: Top: Light microscope image of hippocampal presynaptic CA3 axons (blue), postsynaptic CA1 dendrites (red), and synaptic connections labeled using the mGRASP technique (green). Bottom: A 3-D reconstruction showing the presynaptic CA3 axons (blue), and postsynaptic CA1 neuron dendrites (red) studded with mGRASP-labeled synaptic connections (green).COURTESY OF JINHYUN KIMOverview: Initially implemented in nematodes and flies, GRASP (green fluorescence protein [GFP] reconstitution across synaptic partners) relies on the injection of two viruses carrying split, complementary GFPs that light up when they meet in the brain. In late 2011, Jinhyun Kim at the Korean Institute of Science and Technology and her colleagues at the Janelia Farm Research Campus in Ashburn, Virginia, introduced a new version, called mGRASP, which allows scientists to resolve synapses in more complex mammalian brain tissue. One of the split GFPs is targeted for the presynaptic neuron and the other for the postsynaptic (Nature Methods, 9:96-102, 2012).

Learning curve: It varies. “One student started a couple of months ago and he is able to label with mGRASP. He’s close to gathering really nice synaptic distribution data out of it,” Kim says. “If it works, it’s really quick.” On the other hand, she has seen other researchers have problems with virus injections for several months.

Advantages: The method allows you to look not only at how whole brain regions are connected but also at the details of synaptic structure and distribution, Kim says. Because mGRASP uses light microscopy, the approach is faster and cheaper than EM-based methods. The split probe is introduced using adeno-associated virus vectors rather than incorporated into transgenic mice, which allows researchers to more easily study their own mouse mutants.

Caveats: So far, the method has been used in mouse thalamus, cortex, and hippocampal cells. To investigate synaptic connectivity in other areas of the brain, the system may need tweaking, Kim says. Because mGRASP is relatively new, it needs further validation—which Kim’s group is working on now. As of fall 2013, about 200 labs have asked her for the virus construct. Kim’s group is also trying mGRASP with Brainbow, trans-synaptic labeling with rabies virus, and tissue clearing. (See “Transparent Brains” below.)

Tips: The method’s developers have made mGRASP analysis software available in the supplementary portion of their 2012 paper.

Costs: The cost of mGRASP is much less than electron microscopy and array tomography, Kim says. You’ll need access to a confocal microscope, a vibrating blade microtome, and all the related reagents, mounting media, and other consumables. Labs with experience handling viral vectors should be able to produce the virus, or you can purchase it from a university core facility that produces viral vectors, Kim says.

Overview: Scale, CLARITY, and most recently, SeeDB are new methods for optically clearing the brain, a process that reduces the amount of light scattering in tissue and allows light to penetrate further into whole pieces of fixed tissue.

First introduced by RIKEN scientists in 2011, Scale, a blend of urea, glycerol, and detergent, is cheap to make, and it takes less than two weeks to perfuse an incubated mouse brain. The method does, however, have the disadvantage of expanding brain tissue slightly. The complete recipes for Scale and its variations are available in the original article (Nature Neurosci, 14:1481-88, 2011). 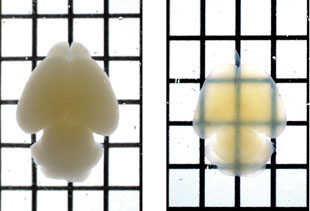 A CLEARER VIEW: Soaking in simple fructose and water solutions makes newborn mouse brains transparent in just three days. Unlike other clearing methods, this technique does not change the sample volume, and it has been shown to preserve dendritic spines and other fine neuronal structures.COURTESY OF TAKESHI IMAIIn comparison, using CLARITY is slightly more involved, because the method includes perfusing the animal with a hydrogel solution instead of the standard fixatives, then incubating its brain in an electrophoretic tissue chamber using a specialized solution. CLARITY’s inventor, bioengineer and psychiatrist Karl Deisseroth of Stanford University, runs CLARITY training courses and makes a detailed protocol, materials list, and troubleshooting forum available at clarityresourcecenter.org/. “CLARITY usually takes a few run-throughs for new users before they get the hang of it,” he says. “Many seemingly minor individual aspects of the protocol are actually quite important, ranging from using fresh buffer to keeping electrodes clean.” Antibody stains for axons and synaptic stains work well and are easy to use, Deisseroth notes. The group is now working on a way to speed up immunostaining.

Described in June 2013 (Nature Neurosci, 16:1154-61, 2013), SeeDB is a simple and cheap method that involves soaking fixed brain tissue in increasingly higher concentrations of fructose dissolved in water. It does not require special equipment and takes three days. “Success depends on the preparation of the fructose solution,” says developer Takeshi Imai, a team leader at RIKEN. A drawback is that SeeDB works with immunostaining only at depths less than 100 μm. What’s more, fructose does not easily perfuse through larger tissue samples, such as whole rat brains, so the sample may need to be trimmed down. Imai notes, however, that regardless of the clearing methods used, the microscopes themselves set fundamental limits to the depth of imaging. 