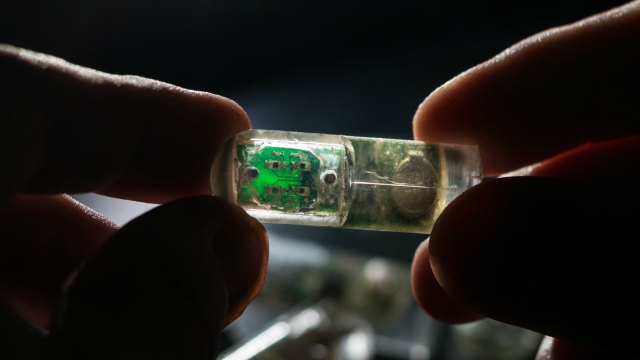 The ingestible biosensorLILLIE PAQUETTE, MITBioengineers have come up with a pill containing engineered bacteria and electronics that can read and wirelessly transmit information as a means of monitoring gut health. The prototype of this ingestible-micro-bio-electronic (IMBED) capsule was used to spot intestinal bleeding in pigs, the designers report today (May 24) in Science.

“We could evolve these living systems to conceivably sense any biological marker,” Mark Mimee, a graduate student at MIT and lead author of the study, tells STAT News.

The basic idea of Mimee’s pill is that bacteria glow in the presence of a particular molecule, and an adjacent electronic circuit detects the light signal and wirelessly transmits it to a cell phone. For this proof-of-concept demonstration, Mimee and his colleagues engineered E. coli to bioluminescence when they encounter the compound heme, an indicator of bleeding, in the guts of pigs. Packaged within a capsule 1.5 inches in length, the bacteria and electronics alerted the researchers to bleeding with the pigs’ guts within an hour of the pills being inserted with a tube, and kept transmitting data for two hours.

“A lot of important biology and health-related pathways are happening there, and we don’t have really good technologies to see inside the gut and measure chemicals there,” Jeff Tabor, a bioengineer at Rice University who was not involved in the study, tells STAT. “Getting the data back out is a challenge, so having a convenient, really practical strategy for having the bacteria tell us what they see is important.”

The researchers envision that such probiotic sensors could be developed to monitor the goings-on within organisms long-term, to pick up on multiple molecular signals simultaneously, and to be smaller.