When adults have strokes affecting a structure called the arcuate fasciculus in the left hemisphere of the brain, they usually lose their language abilities and regain them with difficulty, if at all. But the same is not true for infants who have strokes affecting this region during the first few days of life, according to a study published August 1 in eNeuro. Despite perinatal stroke damage to or near the left arcuate fasciculus, the study finds, developing infant brains acquire fairly normal language skills by age four.

The arcuate fasciculus (AF), one of the brain’s axon highways, is present in both hemispheres, but it’s the left AF that is typically important for language. The study, of six four-year-olds who had had perinatal strokes near or overlapping with the left AF, found that the larger the right AF relative to its left-hemisphere counterpart the stronger the children’s language abilities were.

Overall, “the brain is showing this capacity to use other areas on the contralesional hemisphere that will take over and will support language acquisition almost at the near normal level, which is good news,” says study coauthor Laura Bosch, a psychologist focusing on language acquisition at the University of Barcelona. She notes, however, that one of the six patients had significant language impairments that can’t be discounted.

Previous research had indicated that, unlike in adults, strokes in the left hemisphere of newborns did not seem to hamper language development, but the neurological mechanisms behind this stroke recovery were unknown, the authors write in their report. Prior to their analysis, there had been no neuroimaging studies on pre-school-age kids who’d had a stroke in utero or as a newborn (known as a perinatal arterial ischemic stroke, or PAIS), a rare condition occurring in 1 in 4,000 births.

The six patients in the study were part of a large, multicenter study of PAIS in Spain. All of them had strokes as newborns and received an MRI scan within days of their initial neurological symptoms. Then when the children were four years old, the researchers tested their language abilities and also performed more imaging of brain structure. Given stroke damage to the left hemisphere, the researchers asked, would the children assign left hemisphere language functions to other areas?

The patients all had normal verbal IQs according to a vocabulary test. On the language domains of neuropsychological tests, the kids’ results were also normal, though at the low end. They scored below the normal range in certain language skills, such as the ability to retell or discuss a story and phonological processing, in which kids are asked to, essentially, play with syllables, Bosch says.

But it was in tests of expressive language, where kids’ speech was recorded as they played and talked, that the stroke patients differed most from controls (kids their own age who had taken the same test as part of a different study), says Bosch. Their utterances had fewer words. “That doesn’t mean that they were incorrect, but they were shorter at that age,” says Bosch.

The researchers examined the kids’ brains using diffusion-weighted MRI scans, which allow scientists to build 3-D models of white-matter tracts, including the AF. As controls, the researchers looked at equivalent scans from healthy kids of the same age from the National Institutes of Health (NIH) Pediatric MRI Data Repository, which is part of a study on normal brain development. A major area in which the patients and controls differed was in the structures of their AFs.

In healthy adults, explains Marco Catani, who heads the neuroanatomy and tractography laboratory called NatBrainLab at King’s College London, the AF, which has three parts, is approximately the same size on the left and right sides, but there’s variation in the presence or absence of one part, called the long segment. According to Catani’s research, 80 percent of healthy adults have all three AF segments on the left but have an absent or very small long segment in the right hemisphere, he says.

In the stroke patients from the present study, all three segments of the AF were present on the right side of the brain. Some regions of the AF were also present on the left, but not all three and not in all the patients. In controls from the NIH database, the reverse was true: all three AF segments were always present on the left but not necessarily on the right. Further, the researchers found that the more the volume of the AF was shifted to the right hemisphere, or lateralized to the right, the more words the kids spoke at a stretch during the expressive language test. These findings suggest, the authors write, that in response to stroke, children’s brains are assigning language functions to the right hemisphere.

The patients in the present study had “very little language impairment compared to neurotypical children. So that means that the right hemisphere is really taking over most of the functions [in these children],” says Catani, who was not involved in the study.

Brain plasticity in adults and older children after stroke

The results add to previous data about stroke recovery in adults and in children.

Catani notes that the findings are in line with those of a previous study he led, which found that the volume of the right long segment of the AF was positively correlated with how well adult patients regained language abilities six months after stroke.

The growing evidence that children can recover from these perinatal strokes may give reassurance to the families of children who’ve had them, says Torsten Baldeweg, a cognitive neuroscientist at University College London and the UCL Great Ormond Street Institute of Child Health who was not involved in the present study. Bosch’s results are also somewhat similar to Baldeweg’s from a recent study in older children who had had left hemisphere neonatal strokes. He and his colleagues found that a functional lateralization toward the right—meaning that the right side of the brain was more active than the left during language tasks, according to functional MRI data—was tied to a better recovery of language abilities.

Baldeweg notes, however, that his study did not find that structural lateralization—having larger language-related structures on the right—was as important as it seems to be in the present study and notes the difficulty of drawing conclusions from small sample sizes.

The study authors note this limitation. “I want to make it very clear that we have a very small sample. This is a very difficult sample to get and we could only get few patients. Thus, our results are just a first step,” Pablo Ripollés, a coauthor of the study and currently a postdoc in the psychology department at New York University, tells The Scientist in an email.

Nevertheless, the results are reason to continue studying these children as their language develops to understand more about the role of AF lateralization in language recovery after stroke.

“This speaks to the potential power of our brain to rewire itself in different ways, especially during early childhood,” Ripollés adds. 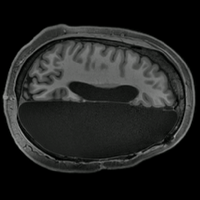