Nearly two weeks ago, Alessandro Laurenzi, a biologist working as a consultant in Bologna, Italy, was mowing the grass in his garden when a friend stopped him and said the mower reeked of fuel. “I couldn’t smell anything at all,” he tells The Scientist. That was in the morning. A few hours later, he went to have lunch and realized he couldn’t smell the food he was about to eat and when he took a bite, he couldn’t taste it either. Within a few days, he developed symptoms of COVID-19 and called his doctor to ask if he could get tested. Because his symptoms were mild, Laurenzi says, his doctor said no.

Laurenzi had heard anecdotally that many COVID-19 patients in Italy suffered from a loss of smell, so he started reading all the scientific papers he could find to see if his anosmia and ageusia would ever abate. One of the papers, a review published March 13, mentioned that SARS-CoV-2, like other coronaviruses such as SARS-CoV and MERS-CoV, could target the central nervous system, possibly infecting neurons in the nasal passage and disrupting the senses of smell and taste.

Some of the purely respiratory symptoms that you might attribute to the disease, the inability to get air into the lungs, might actually be defects in respiration controlled by the nervous system.

Reading this, Laurenzi immediately reached out to the corresponding author, Abdul Mannan Baig, a researcher at Aga Khan University in Pakistan, and asked if his symptoms were reversible. The evidence, Mannan told Laurenzi and reiterated to The Scientist, indicates they will abate, possibly because the loss of sense is caused by inflammation in the area as the body fights the virus, so those symptoms could disappear in seven to 14 days. “Let’s hope so,” Laurenzi tells The Scientist.

Documenting such peculiar symptoms is important, Mannan tells The Scientist, because the loss of smell and taste could be an early warning sign of SARS-CoV-2 infection. Based on the literature, British ear, nose, and throat doctors have now called for adults who lost those senses to quarantine themselves in an attempt to tamp down the spread of the disease, The New York Times reports. The symptoms, Mannan adds, also suggest that the virus has the ability to invade the central nervous system, which could cause neurological damage and possibly play a role in patients dying from COVID-19.

“This is something to keep a careful eye on,” says Matthew Anderson, a neuropathologist at Beth Israel Deaconess Medical Center in Boston. “There’s been some intriguing observations in previous studies on viruses, including coronaviruses, to show that they have the capacity to enter the nervous system.” It’s important that this be considered for SARS-CoV-2 and for “people to do the experiments, including autopsies, to look for signs of this damage.”

Because COVID-19 has symptoms similar to the flu, “much of the attention could get diverted towards the pulmonary aspect of SARS-CoV-2, while neural involvement may remain covert,” Mannan says. When a patient begins to exhibit severe neurological symptoms, such as a loss of involuntary breathing, it may be “too late to prevent fatalities.”

In a review article first published February 27, Yan-Chao Li of Jilin University in China and colleagues argue that if SARS-CoV-2 infects nerve cells, particularly neurons in the medulla oblongata, which is part of the brain stem that serves as the control center for the heart and the lungs, the damage could contribute to “acute respiratory failure of patients with COVID-19.”

The epidemiological evidence supports the hypothesis that neurons in the medulla can become infected with SARS-CoV-2 and contribute to a patient’s breathing problems and potential death. Li and colleagues explain that the time it takes for COVID-19 to progress from first symptoms to difficulty breathing is typically five days; patients are then admitted to the hospital roughly two days later, and a day after that put into intensive care. “The latency period is enough for the virus to enter and destroy the medullary neurons,” they write.

SARS-CoV-2 enters human cells using a receptor called ACE2. Researchers have reported that ACE2 regulates cardiovascular function, and according to a search of protein databases, many human cell types express ACE2, including lung, heart, kidney, intestine, and brain tissue, Mannan says. There are also multiple ways that the virus could invade the central nervous system, he explains. It might circulate through the blood and then attack ACE2 receptors in the endothelia that lines blood capillaries in the brain, breaching the blood-brain barrier and invading neurons through that route. A breached blood-brain barrier could also cause brain swelling, compressing the brain stem and affecting respiration, Mannan says. The cells innervating the lungs could also become infected, making involuntary respiration more difficult.

Evidence from experiments in mice also suggest that the virus might target the nervous system through the olfactory bulb. In a 2008 study, immunologist Stanley Perlman of the University of Iowa and colleagues showed that SARS-CoV—the virus that caused the SARS outbreak that killed more than 770 people in 2003—entered the brains of transgenic mice expressing human ACE2 through neurons in the nose. The virus then rapidly spread to connecting nerve cells. The extensive nerve damage was the major cause of death, the team reported, even though low levels of the virus were detected in the animals’ lungs. 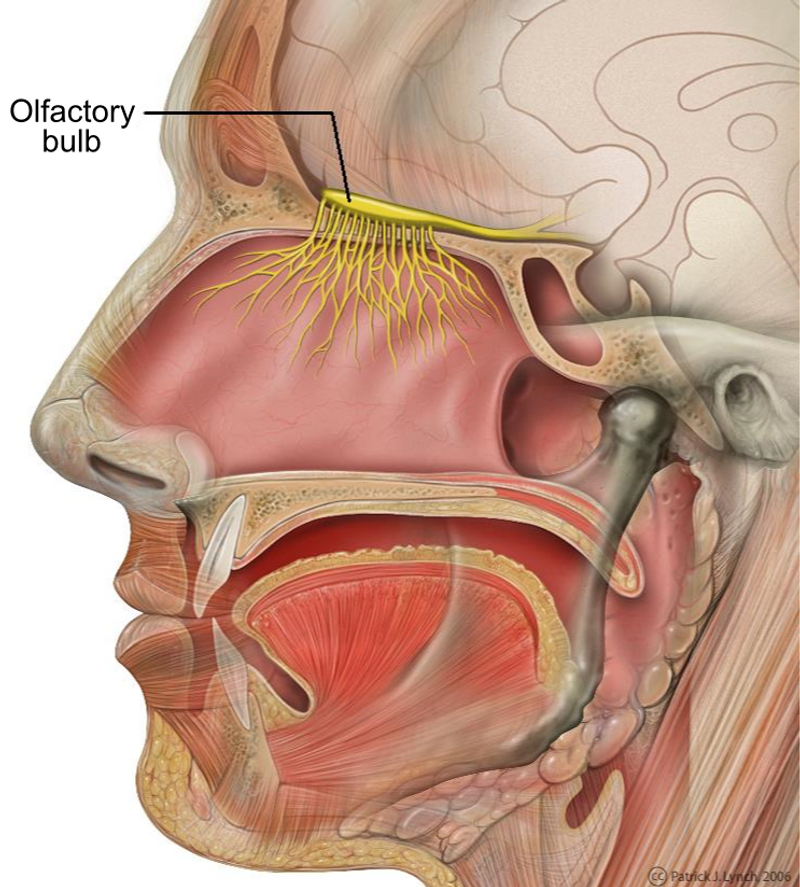 Although this has not been demonstrated, SARS-CoV-2 could potentially enter the nervous system through the olfactory bulb, as SARS-CoV does in mice.
WIKIMEDIA, PETER J. LYNCH

“Death of the animal likely results from dysfunction and/or death of infected neurons, especially those located in cardiorespiratory centers in the medulla,” the team wrote. A study with the MERS virus in mice expressing ACE2 showed a similar result, Perlman tells The Scientist. “The brain certainly can be readily infected in mice,” he notes. “Whether this occurs in humans to any great extent is really unknown, but not very likely at this point,” given how much larger rodents’ olfactory bulbs are relative to the overall size of their brains compared with humans’ and the paucity of evidence in humans.

Still, he says, the fact that COVID-19 patients have lost their sense of smell or taste is interesting because, if the virus infects the nose, it would use the exact same neurons as in the mouse studies to enter the brain. If taking this path, SARS-CoV-2 could work its way up to the olfactory mucosa, which consists of epithelium cells, blood vessels, and the axons from olfactory neurons. “This area is connected to the olfactory bulb, via small, sieve-like, tiny openings called the cribriform plate that is located at the base of the frontal lobes of the brain,” Mannan explains. Because the brain’s frontal lobes are close to the olfactory bulb where neurons may be infected, the tissue deeper in the brain could be endangered too.

Infection of the brainstem could cause changes that would affect involuntary respiration, which suggests “some of the purely respiratory symptoms that you might attribute to the disease, the inability to get air into the lungs, might actually be defects in respiration controlled by the nervous system,” Anderson says.

Implications of neurological infection by SARS-CoV-2

Mannan emphasizes that the neurological data on SARS-CoV-2, though preliminary, could be important for doctors deciding how to treat patients. Asking about neurological symptoms—loss of taste or smell, twitching, seizures—could factor into who might go into acute respiratory failure, or at least who might suffer from it soonest, and allow for more efficient triaging of patients, with a close eye kept on those with neurological symptoms. “It is important to screen the patients for neurological signs early and late in the course of COVID-19,” he says, “as this could be life-saving in our fight against COVID-19 pandemic.”

Anderson and Perlman add that postmortem examinations of the brains of patients who died from COVID-19 are essential to understanding the role nerve damage might play in the progression of the disease. Few, if any, autopsies of these patients are being done because of fear of contracting the disease, and if the autopsies are being done, it’s not likely that examiners are looking at the brain, only the lungs. “They’re just not thinking that the brain could be the site of the problem,” Anderson says, “and so that’s the really important aspect of these reviews, getting that idea out there.”